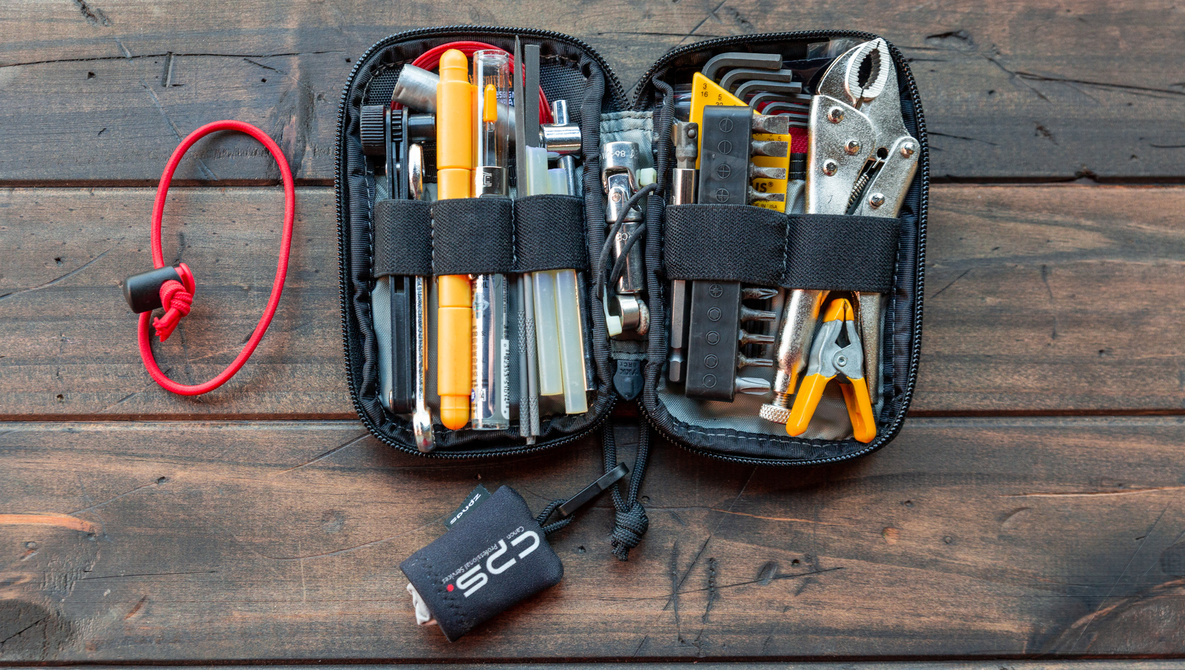 How many times have you had to buy a tool while on the road or borrow one from a building manager during a photoshoot? Over the years, I have built this small, lightweight kit so this wouldn’t happen anymore.

Most photographers will have a few tools tucked into a stand bag for the occasional problem or emergency repair that needs to be done during a location shoot, or they will bring extra gear so that they can make repairs later when back in their studio. But what about when you spend more of your time on location or traveling than you do in the studio? Weight and luggage restrictions are the bane of every photographer that spends most of their time away from the studio. So, having everything you may or may not need with you is difficult and tools can be a heavy set of items that are often first to be left behind.

For several years I didn’t carry more than a Leatherman in my gear bag opting to save on weight. Like a lot of people, I hoped it would be enough for most minor problems, but it often wasn’t. I’ve sent assistants to the corner store to buy a tool, asked custodians, building managers, and even security late at night in my hotel to borrow tools. The amount of time wasted looking for an Allen wrench or money spent on cheap pliers and screwdrivers eventually led me to build a small and light toolkit that would be TSA safe and most importantly, useful.

First, I put all the tools I already owned that were under six inches in a bag to see how much that would weigh and realized this wasn’t going to be easy. Compact tool kits are popular in the EDC (everyday carry) community, so that was where I looked for ideas. There are lots of examples of larger tool kits for cars or trucks that are well put together, but I knew I would need something even smaller. It seems a lot of EDC tool kits are often filled with pricey gadgets or completely useless tools, and I wanted whatever I carried to be things I knew I would use.

Starting with a small bag, about 3.5″ x 5.5″, made by the popular brand Maxpedition, that set the maximum size a tool could be as well as the number of tools I could carry. This helped a lot, because I had to make choices on things I thought would be useful but just didn’t have the room for. Over time and having carried this kit for a few years, I have also eliminated and added new things that were either smaller or just not used very often. Before I get into listing all the items I’ve put into this kit, I want to share a few common tools that would probably be useful but I didn’t include because I often carry them in my camera bag. I still carry a multitool in my main camera bag as well as a small flashlight, a small roll of gaffer tape, sharpie/pen, sewing kit, and several other various little things. So, none of these are in this kit.

This kit overall was designed for my own personal needs, and if you don’t tend to clean or repair your gear, you may not have a need for something like this at all. I’m sharing it in hopes it might be useful to some or at least inspire some to make their own kit. With that in mind, I have tried to include both more affordable options as well as better quality tools where I think it makes a difference. I find building kits like this to be a fun experiment; however, you could put something like this together fairly cheaply if you wanted something quick to toss in your gear bag.

The largest tool in the kit is the 5″ Vise grips. I used to carry a small adjustable wrench and pliers, but found with the multi-tool and vice grips I could do most jobs just fine. A better alternative would be a pair of Kinpex locking pliers, but they can be pricey for such a small tool, though once you’ve used them, you won’t go back. The only other wrench I have included is a 10 mm standard wrench; anyone who has ever done any mechanical repair work will know it seems to be one of the most commonly used and always mysteriously missing sizes.

In order to keep the size down, I have opted to include various driver bit and ratchet wrench accessories that work together to give me the most options possible. I’ve found this to work out very well, and it offers a wide number of possible tool combinations compared to using more dedicated tools. For me, only carrying Metric driver bits worked, but SAE versions are also available. The small 4″ ratchet wrench is the core of this kit but if you can afford it I highly recommend spending a few extra dollars on either this German-made Wera wrench or this Topeak Rocket Lite. Both are exceptionally well made, small, and lightweight, and well worth the investment. I carry a Topeak wrench in my motorcycle toolkit and absolutely love it because it has a bit socket on the handle end for use as a screwdriver.

When working on photography equipment, sometimes, driver bits are not enough, so I added a precision screwdriver 4-in-1 pen tool. Klein makes a slightly better version for a few dollars more, or if you have any electronics stores in your area, you can often find decent kits available. Lots of our photography gear comes with their own Allen keys if they need them, so I have a drawer full, and I used to take the five most common ones and put them in a little Ziploc baggy. That worked just fine for years, but I was able to find this nice little kit made by Bondhus here in the US.

The driver bit sets can be hard to find on their own, but they often come in various tool kits or bundled with a screwdriver. The bits themselves are easy to come by, but it’s the little plastic sleeve they fit in that is really important for a small kit like this. If you’re like me you may even already have a few tossed in a toolbox, but I did find this kit that also comes with a small bit extension and socket adapter, which I’ve found useful in my own kit.

WD40 used to make a small travel pen, but it seems to have been discontinued. I found this Siper lube pen to be a good replacement, as it only dispenses a drop at a time, which is perfect for small items and tripods. Plus, you look like a genius when you fix that squeaky chair/table that is annoying your sound guy during filming. Zip ties and Velcro should be in every bag that everyone carries all the time. I could write an entire article on the number of times and ways I’ve found them useful. Oh, and of course duct tape, because “if they don’t find you handsome, they should at least find you handy.”

I carry various A clamp sizes in my grip bag, but sometimes, I bring a smaller kit, and this ensures I have at least one if they get forgotten. There are needle files for fixing light stands or other metal objects and a strong magnet for finding lost things in the grass or occasionally dropped items in tight places. I also like to attach those Think Tank red whips to just about everything, as they have a million uses — like a hair tie but adjustable and stronger.

Behind all the tools, I keep a small Ziploc bag with various cleaning items. Most of this stuff is pretty self-explanatory and commonly used for cleaning gear. I added matches and hot glue sticks, as they work great for temporarily holding things together when tape isn’t an option.

Overall, the entire kit though tightly packed is fairly small and surprisingly lightweight. It can be easily tossed into a camera bag or kept in a larger stand/grip bag. Everything included is TSA approved, and I have never had an issue carrying it on a plane. I have even taken it abroad many times with no issue. There is very little room to add anything, but I am always looking to improve the kit. I’ve been thinking about removing a couple of the less common nut drivers, which take up a lot of room. Also, I only really need one needle file. So, there might be room for a new tool soon.

Do you have your own toolkit? What would you include or think could be improved upon?

What Lens Should I Bring With Me?