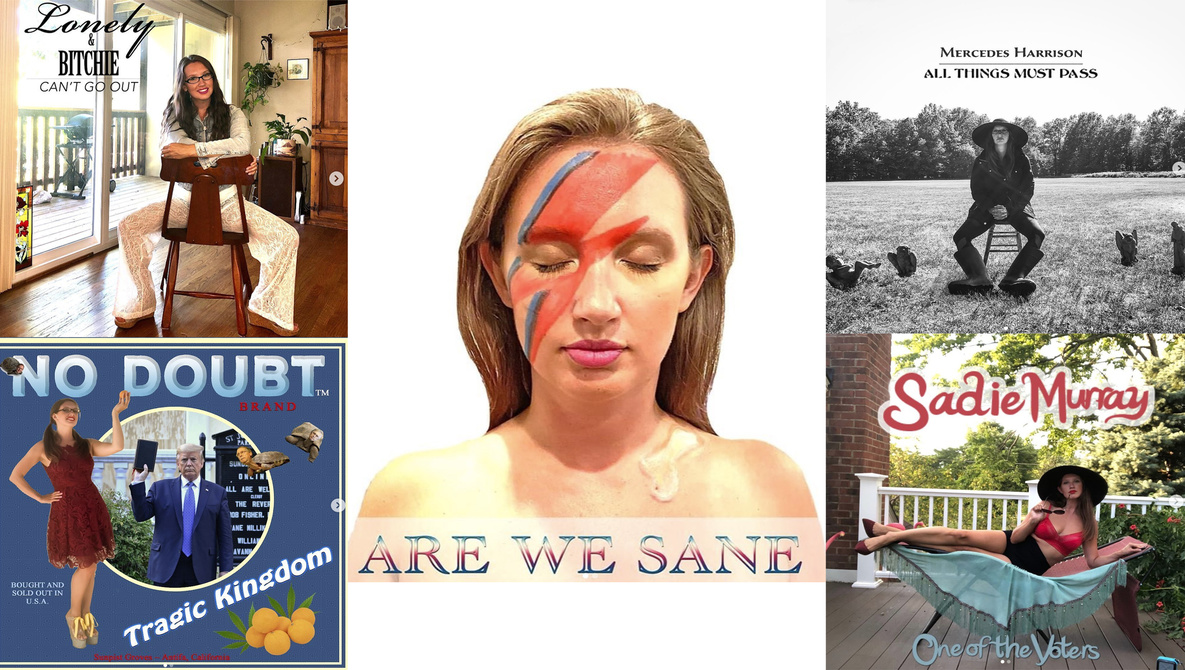 After 101 Album Covers, One Woman’s Quarantine Photo Project Is Complete

After five months and 101 albums, Mercedes Murray has finally completed her biggest creative project yet. Finding herself homebound in mid-March along with millions of other San Francisco area residents, Murray started out by searching for a way to keep busy and entertained, but her work quickly turned into a valuable creative outlet, offering a method to voice her feelings on both COVID-19 and her frustrations with politics. From Bruce Springsteen to No Doubt, Murray set out to replicate some of music’s most iconic album covers using only what was available in her home.

When the stay-at-home orders were first given, Murray had just returned from a trip to visit her parents where she had pored over old family photos. She was inspired to recreate some of the childhood images of herself as something to do to keep busy. She worked her way through the old family photos, posing with a soccer ball to replicate her youth soccer team picture or sleeping next to a bottle of champagne to replicate a photo of her as a baby passed out with a bottle of milk. After working her way through a few dozen of those photos, a friend suggested she try her hand at recreating album covers. She started with Bruce Springsteen’s Born in the USA and was hooked. Murray ultimately ended up with 101 albums, but that wasn’t always the goal. She explained:

I started with no plan and no idea how many I would do. I was just trying to keep myself productive, creative, and entertained. Once I hit 85 covers, I thought, ‘Ok, I’ll stop at 100.’ It ended up being 101.

Scroll through her Instagram feed, and it becomes clear that Murray’s taste in music is eclectic. Some of the artists she featured include Spice Girls, Ariana Grande, Janis Joplin, Supertramp, Prince, David Bowie, and Carol King. Some albums were chosen for their music and others simply because of the covers themselves:

At first, I had a few albums in mind that I thought would be funny or fun to replicate. After I got through those, I started picking albums based on simply if I thought I could recreate the cover or wanted to try. Sometimes, it was just because the album had really meant something to me personally. Others I picked because I liked a quote on the album that I thought related to the times we’re living in and wanted to use that quote.

Some album covers, like Britney Spears’ …Baby One More Time were fairly easy to replicate, while others posed more of a challenge. Murray, who works as the marketing coordinator for Rocky Nook, a photography-driven publishing house, utilized some of what she’s learned on the job to create the album covers. The rest she achieved with careful planning and reverse-engineering of each cover. The images were photographed with her iPhone 8, a ring light on a tripod, and a Bluetooth shutter release. She explained:

I try to do as much as possible in-camera: props, costume, setting, etc. That’s the really fun part for me: it’s like a scavenger hunt (do I have an outfit like this? What can I use to set this scene? Where can I shoot this?) and a puzzle (where does this go? Can I replicate this makeup? How do I need to pose?). I struggle a lot with getting the lighting and angles correctly to match what the original cover was. But I knew if I got caught up in trying to make it perfect, I’d never complete one. So, I just let myself have fun with it and capture a few of the important details or the idea or feeling of the original cover. I was going for fun and not perfection.

Murray’s original image was taken with a white towel as a backdrop. She removed the towel and matched the original album’s cover coloration in post-processing.

For complicated covers, like Supertramp’s Breakfast in America, Murray took some artistic license with the recreation, swapping out illustrated condiments posing as buildings in the skyline for actual physical condiments. She said:

I was determined to recreate as much of the covers in-camera as possible, and that one has a skyline made of condiments, kitchen utensils, and other dinnerware that I insisted on attempting to recreate in my own dining room. It was early on in my project, and I didn’t set the shot up quite right, so editing it after was challenging as well.

Even in a more visually busy environment, Murray did well to remove distractions to depict her version of the Supertramp cover.

Without equipment like green screens and professional lighting setups, she improvised with whatever she could to achieve the shot. For the cover of Lucius’s album Good Grief, Murray used a pillow to stand in for an invisible lover. Her goal was to utilize found objects whenever possible, which really pushed her creativity. She explained:

I tried to stick with what I had or what I could borrow, especially because substituting something would end up being kind of funny, especially if the substitution was completely out of left field. For example, when I did the Derek and the Dominos cover, there’s a bouquet of flowers in it that’s wrapped up nicely. I had a bouquet but no nice wrapping, so I used toilet paper, which at the time was sold out in most stores. And don’t worry, it didn’t go to waste!

All of the post-processing for the project was achieved using Photoshop and occasionally Photoshop Mix. Many of the albums required her to learn as she went, and as you look through the series, it’s easy to see her images becoming more confident and inventive. For the final shot of the series, Murray enlisted some help to achieve a more complicated composition:

The Nirvana cover was one I swore up and down I wouldn’t do. It seemed both complicated and overdone. But when a local photographer, Eric Mull, (who actually shot my senior portraits 16 years ago) offered to shoot a cover with me, it seemed to make the most sense, and I instantly knew I’d end my series with that one. You know, go out with a splash! Eric was shooting with his GoPro and had a friend with a pool, so with those two key components nailed down, I got some pasties and beige underwear and jumped in.

It was really hard, but really fun. We spent probably a half-hour going underwater, coming up for air, going back under. We realized quickly that my hair was going to cover my face, and I had failed to bring a headband or anything, but luckily, we had a pair of goggles that I wore as a headband. He could barely see what he was shooting underwater, so we took a few breaks to check the images, readjust as necessary, and then try again. The hard parts were nailing the angle, which I think we got very close to, and simply holding my breath for long enough to get the shots!

Some of the images, like Nirvana’s Nevermind, are a bit more revealing, and many of them voice her political views, but overall Murray, says the response to her album covers has been overwhelmingly positive,

Mostly, it’s only been shared to my family and friends, who are by default very supportive of me, so it’s been really nice to be able to share this silly pastime I started and find out that people are really entertained by it and enjoying it, especially to see the responses from my older relatives. Anytime I posted something a little more risque, I’d always kind of groan to myself, like ‘Oh, gosh! What’s my aunt going to think of this one?!’ And without fail, each time, she was just so glowingly positive and complimentary.

After 101 covers, the project is complete, but Murray is already thinking about her next project. She’s taking a bit of time to reflect on what she learned and gather her thoughts, but she’ll be back with a new creative photography project soon. Check her out on Instagram to see all 101 of her album covers and to see what she has planned next.

A Start to Finish Tutorial on Light Painting a Car