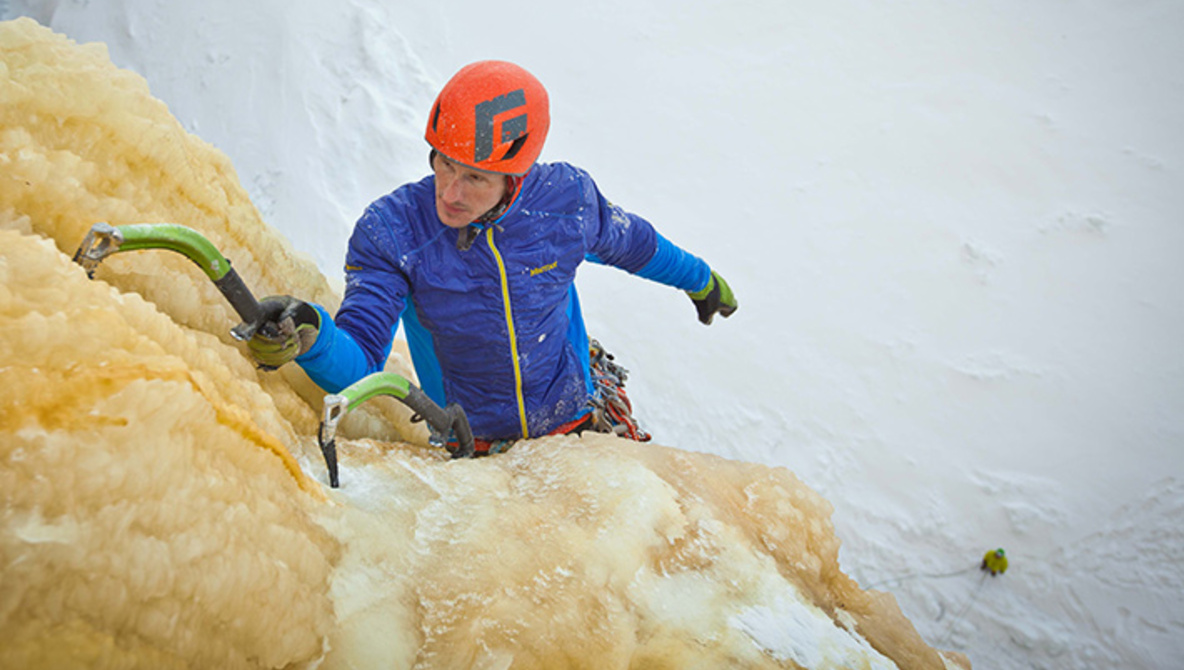 Behind The Scenes Of An Epic Backcountry Ice Climbing Photo Shoot

There are a few behind the scenes videos out there that show photographers working with ice climbers, but often the climbs are right next to the road, making it convenient to bring tons of gear, power, and spend all day getting coverage. So what does it take to create those images when you’re miles deep into the woods, and can only take what you can carry on your back? In this behind the scenes video, I’ll show you the challenges of such a shoot.

Climbers Adam Dailey and Jon Jugenheimer were in town for Michigan’s annual Ice Fest, and we coordinated to head out to Pictured Rocks National Lakeshore for a climb called “HMR”, a 60 meter yellow ice formation that is rarely seen, let alone climbed.

A lot of factors were working against me on this day. Temperatures ranged from below zero at night to only about 18°F during the day. 4-5 miles of snowy trails laid between us and our location, with about 1.5 miles of that being unbroken powder up to my hips. A 40lb pack included photo, video, and climbing gear. Lastly, with time to only shoot 2 climbs at the most, I had to hustle on location to get my shots.

A very cold year so far, we expected there would be some shelf ice at the base of the climb. In previous years, and in the spring, open water from Lake Superior often crashes right up against the base of the climb, making a very precarious belay area. While the shelf ice might seem stable and flat, along the shore are hidden spikes and fins that make snowmobile access almost impossible, which is why we had to ski in. I did my research by speaking with the Park Service and locals to make sure we knew the best route to get to the location. Other images of this climb existed, so I used those for reference when planning what shots I wanted to get. 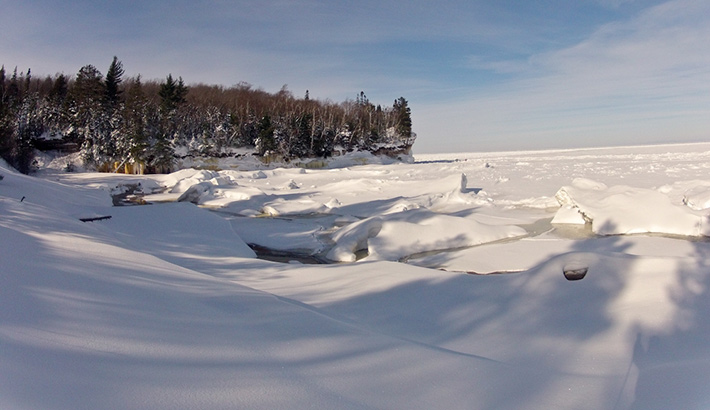 After the first few miles we stopped at the beach, and the climbers took a break to have some water and snacks. Our bodies were burning calories very quickly from the combination of cold weather and skiing. While I wanted to have a break myself, I had to get my shots before I could relax. I staged their packs and gear a bit, but posing people isn’t really my style. I will ask them to take a break on a lookout or in a place with better light, but I try to shoot candidly whenever possible. To me, athletes aren’t models, and I find that if you get too specific and try to pose too much, it will come across as forced and very unnatural. My direction mostly comes in the form of, “Look at the cliff over there,” or “take a drink of water.”

The shots from the lookout were simple enough to execute, but waiting for the climber to ascend up the climb before shooting meant waiting in the cold. Handwarmers were a must. There was another team shooting from the ground, so once we both had our shots, I packed up my kit and headed to the top of the climb, about a 10 minute hike. 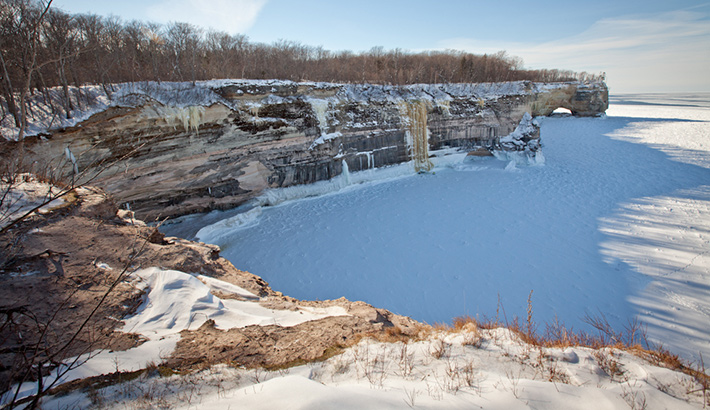 I had previously rigged an anchor with a rope ready to go, and buried it in the snow so they didn’t get into any photos. I uncovered them and got suited up for rappelling as quick as I could, knowing that Adam had already been on the wall for over an hour! As noted in the video, rappelling down to a climb as large as this can be tricky to do. The anchor system for my rappel line was off to the left side, while Adam was making his way up the right side. The angle dropped me further away than I wanted, so I had fight with the rope tension to get over further.

There was still quite a bit of water flowing over the side, which got on the rope and some of my gear. This made my descending device icy, and it was rather nerve wracking to be dangling from a small rope almost 200 feet off of the ground.

By the time I was done getting my shots from above, Adam had been on the wall for over 2 hours. He never weighted himself on a screw for a break, so he undoubtedly made the longest send of that route in history. The time was around 4:30 when he made it up, so we didn’t have time for Jon to take a turn himself; I was hoping to get some more top-down shots from a better angle but had to live with what I got from Adam’s climb. Packing gear took about 30 minutes, and we still had to hike out, this time in the darkness. Cold winds picked up and we got moving. We made it back to the van around 8:30pm.

My kit included the following video and photo gear. I went back and forth over the specifics of my kit for weeks before my trip, as I wanted to keep the weight down as much as possible. Each body and lens served a specific purpose to capture preconceived shots.
Canon 5D Mark II (for stills)
Canon 60D (for video)
Canon 16-35 L II
Canon 24-70 L II
Sigma 17-50 2.8 IS
Canon 70-200 L 2.8 IS
GoPro Hero 2
Rode VideoMic Pro
Zoom H1 Audio Recorder
82mm Circular Polarizer
77mm Circular Polarizer
A handful of SD and CF cards
4 Canon Batteries
Induro CT014 tripod

I packed all of my gear into padded Lowepro bags, and then placed those into a large, 75 liter backpack. I talk more about my kit contents in this article I posted about packing and prepping for shoots in winter conditions. 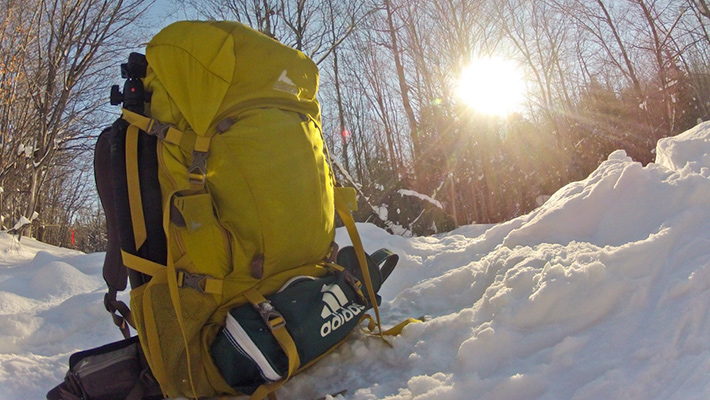 On a side note, knowing that I wanted to capture some visuals of myself working meant I needed to bring a little extra gear and plan to get shots of myself. You can probably tell from the video that it’s pretty rough, but for a BTS video I felt that I needed content over quality. The BTS footage was secondary and I simply didn’t have the time to make it amazeballs. I found that having a GoPro attached to the top of my hiking pole made it much easier to get quick cuts and soundbytes while snowshoeing to the location. Having to stop and pull my DSLR out every time I wanted a BTS shot would have taken too much time and been a headache.

Thanks to Aaron Peterson and Dan Englund from Clear and Cold Cinema for the video footage of me rappelling.

Here are a few of the stills I captured, as seen in the video. 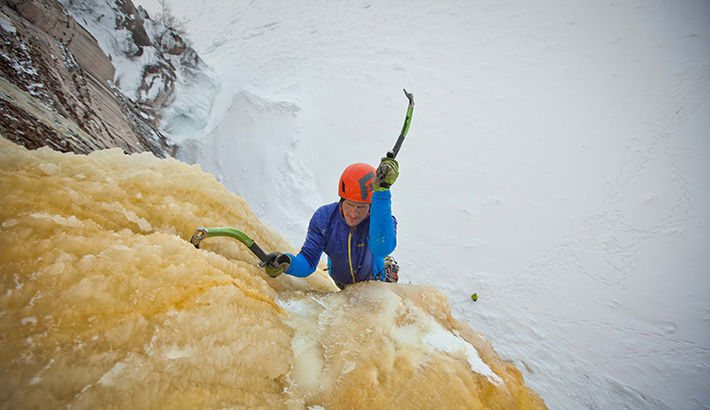 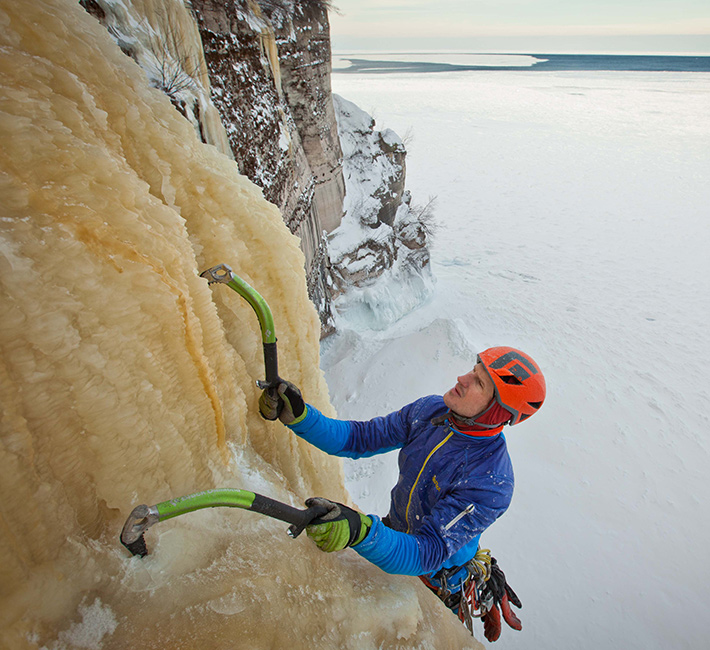 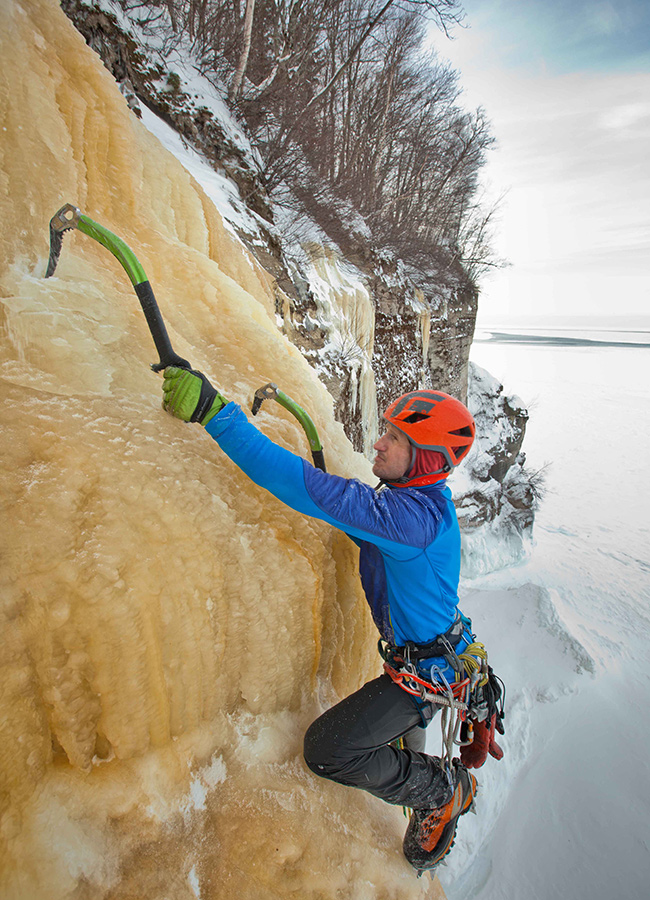 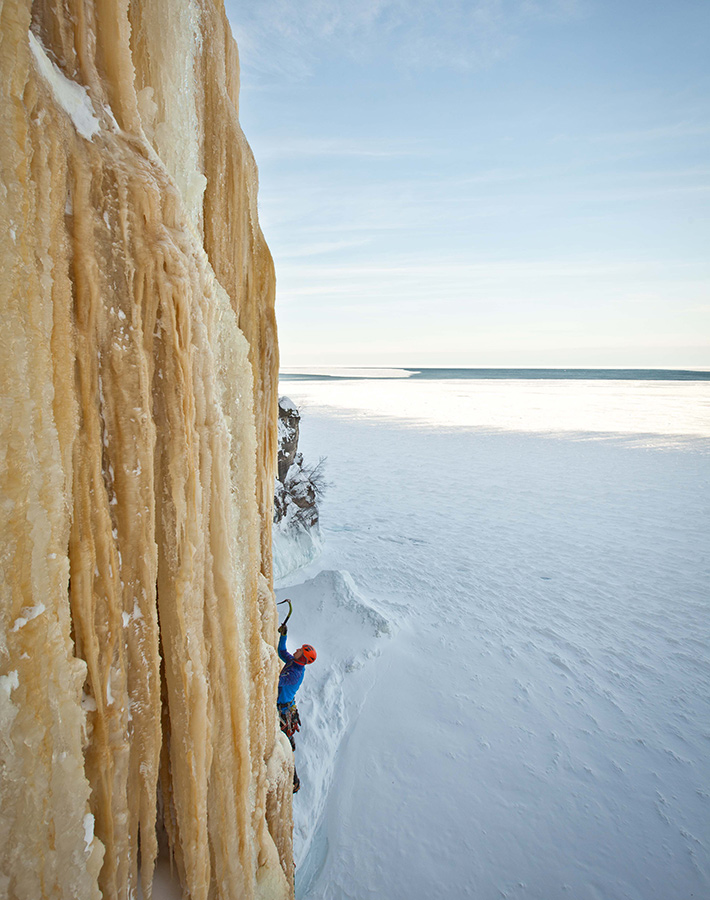 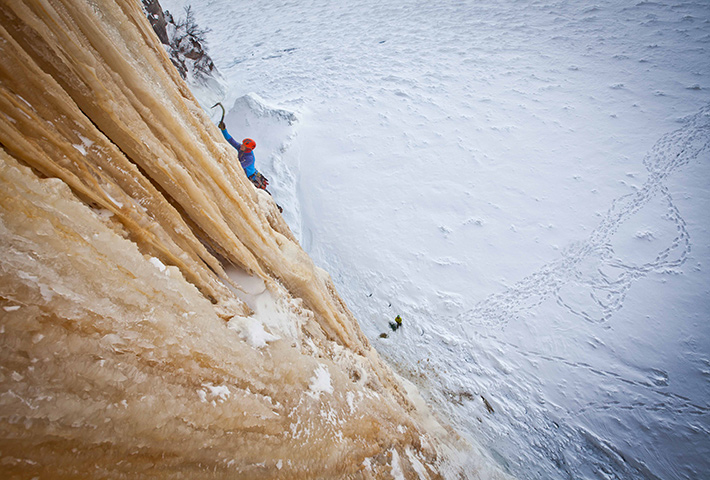 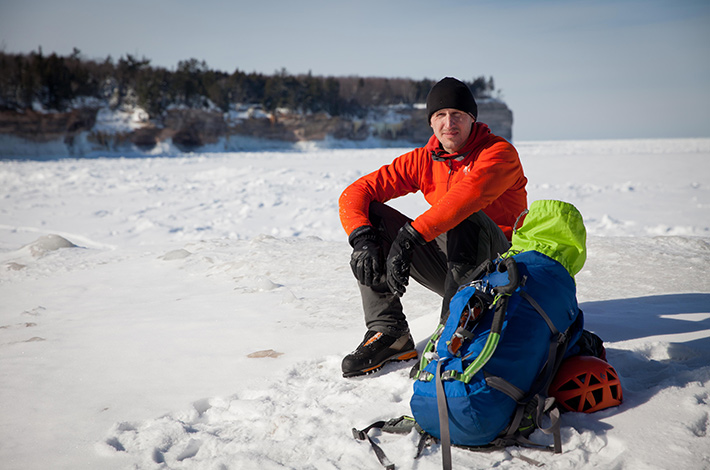 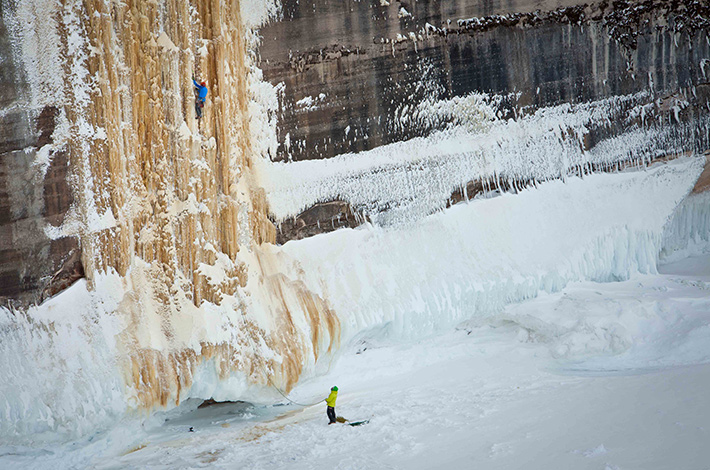 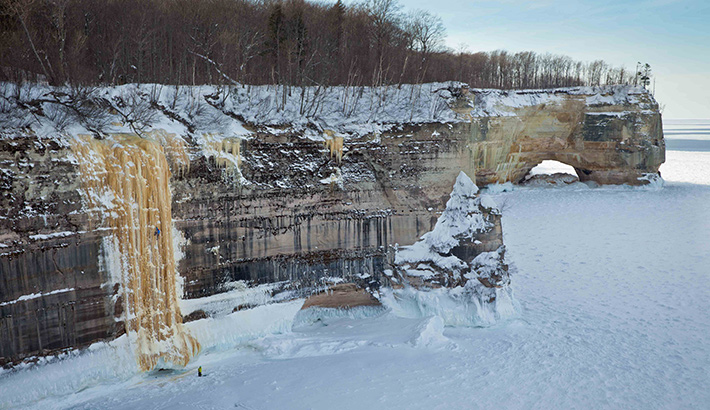 I spent a few weeks shooting ice climbing and landscapes while in Michigan’s Upper Peninsula. If you’d like to see more, check out the Munising gallery on my website. I’m happy to answer any questions about the setup or the shoot, so feel free to leave a comment.

Film and Travel Inspiration for All Creatives: ‘Made in Korea’