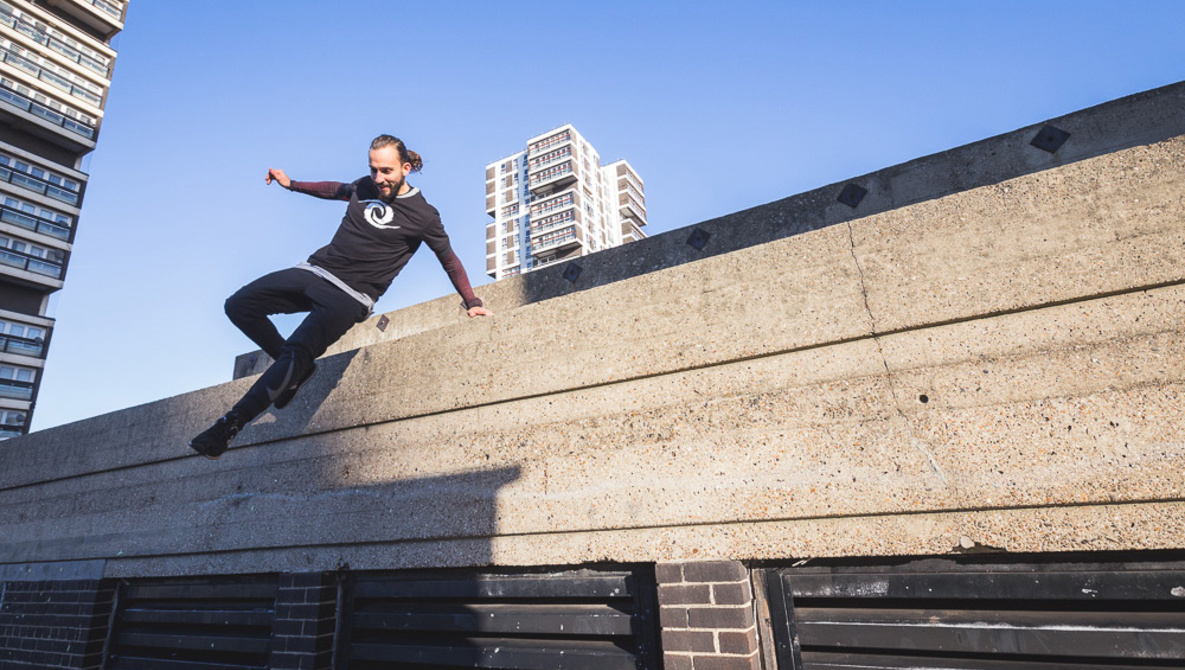 One of my regular gigs is photographing the training events hosted in London by Parkour Generations. Winterval, a day of hard training outdoors regardless of the conditions, takes place every January and shooting it can be a daunting prospect; winter in London is often grim, with short, dark days made grimmer by drizzle or worse. This year we got lucky with glorious sunshine, albeit accompanied by a biting breeze.

As a minimalist who travels a lot, my gear is sparse. As my Canon 24-70mm is upsettingly soft from having bounced around too many overhead luggage compartments, I packed only my 16-35mm and threw my 40mm pancake in as a backup. This suited me as the 16-35mm is my lens of choice, rarely coming off my camera when I’m shooting anything parkour or exploration related, and shaping how my brain sees the world. After 15 years of photographing parkour, my eye tends to seek out geometric shapes and tries to anticipate how the body will move within them. 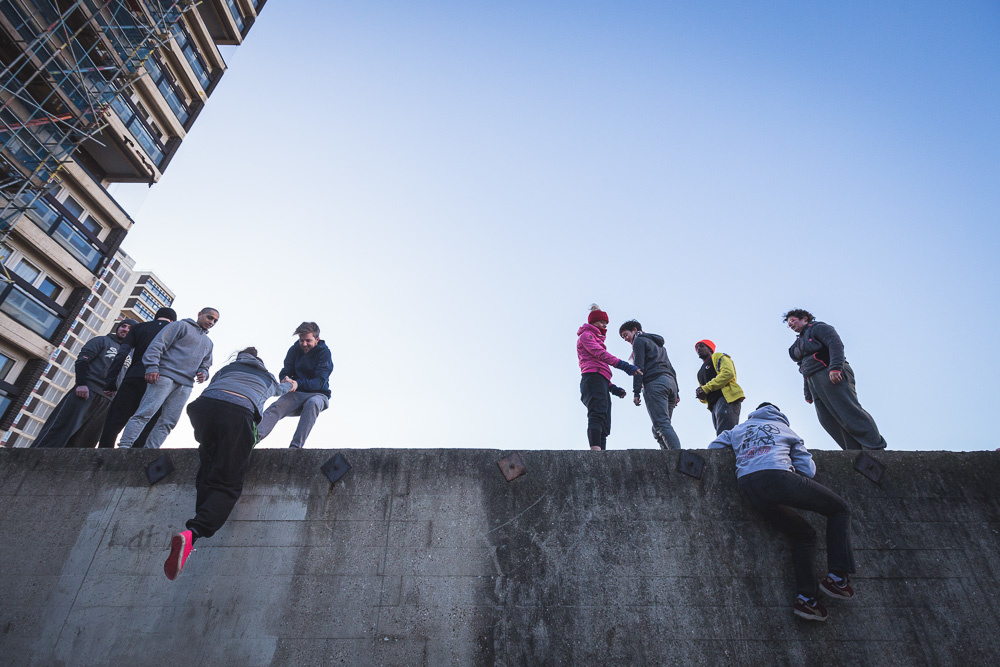 Staying this wide presents a few challenges. To capture some of the more personal moments, you have to get quite close which also means not getting in the way or being a distraction. At the start of the day, just as the organizers address everyone during registration, I speak very briefly to the entire group to introduce myself, make a few bad jokes, and explain that if they don’t want to be photographed, they just need to make a small gesture to me to make it clear that they don’t need the extra pressure of having a lens shoved in their face. Fortunately, parkour is very performative and practitioners are generally comfortable with the level of visibility they create for themselves and, as a result, don’t mind the camera. The participants know that I’m also a practitioner (on occasion I’m also an instructor at these events), and they know I that I will understand what’s going on in their heads as they challenge and push themselves. It also goes a long way to helping me blend in; I’m almost just another participant, but carrying a camera.

While my experience means that I can anticipate many of the movements, staying wide gives me a greater chance of keeping everything inside my viewfinder. I’m always slightly wary of the distortion that happens at the edge of the frame when I’m at my widest, however hands and feet are easily stretched by the rectilinear lens if they’re too close to the edge when shooting at 16mm. Beyond that, image quality is not a massive concern as, most likely, these images will never be printed. As a result, I’m not afraid to crank up the ISO. It’s a much better option than dropping my shutter speed which, by default, tends never to be slower than 1/640 s. Very often I’m shooting upwards, incorporating a lot of sky in the frame. Consequently, the camera’s metering can be misleading so I’m constantly in manual mode, flicking between ISOs, rarely touching the aperture or shutter speed, and continually checking my histogram to ensure that I’m not blowing out highlights in the sky or losing too much detail in the shadows. 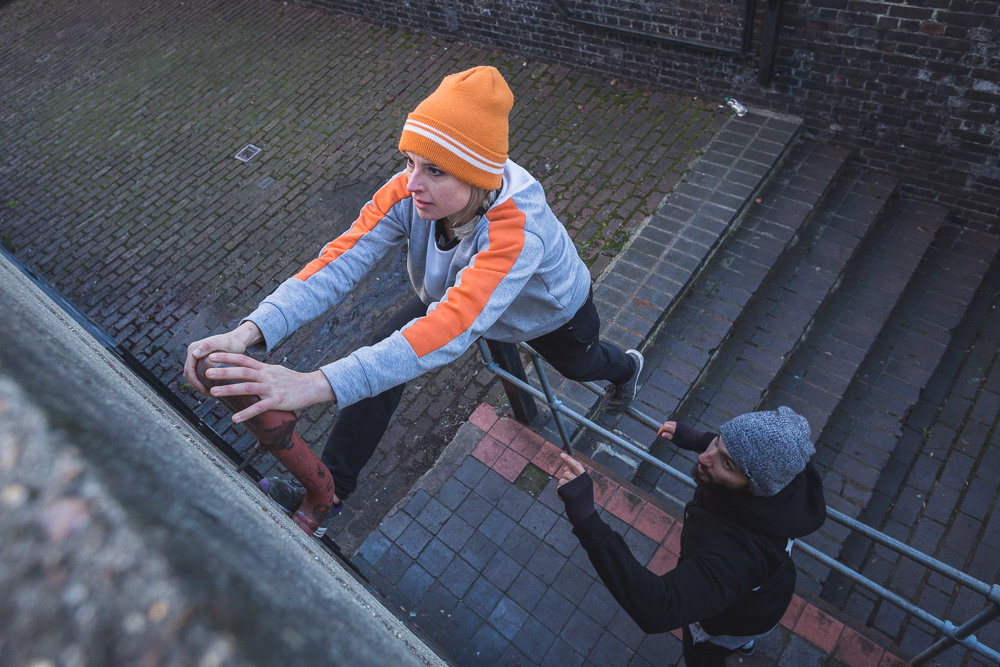 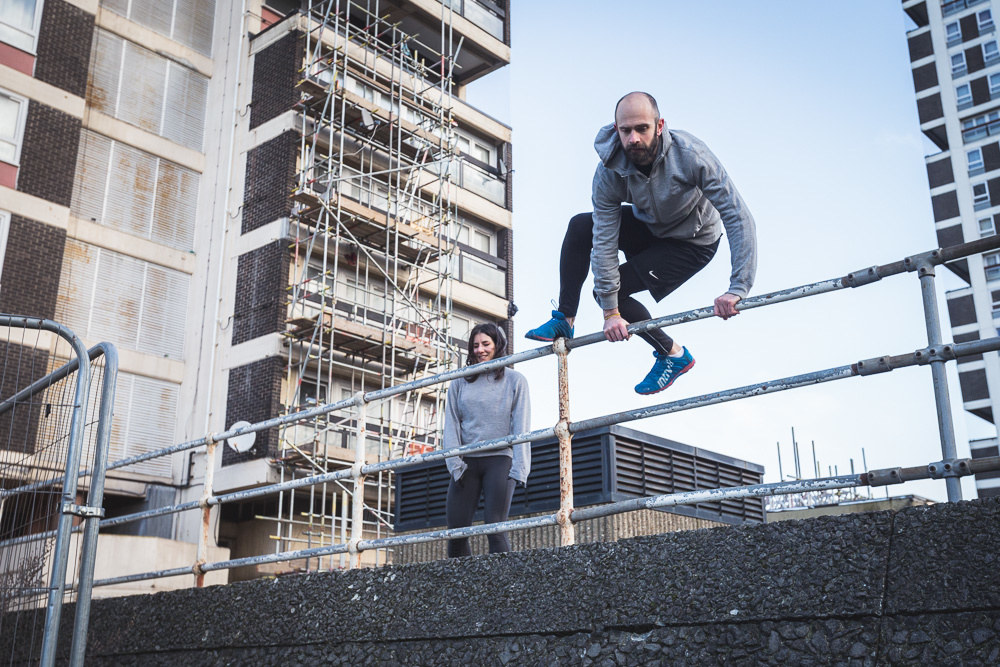 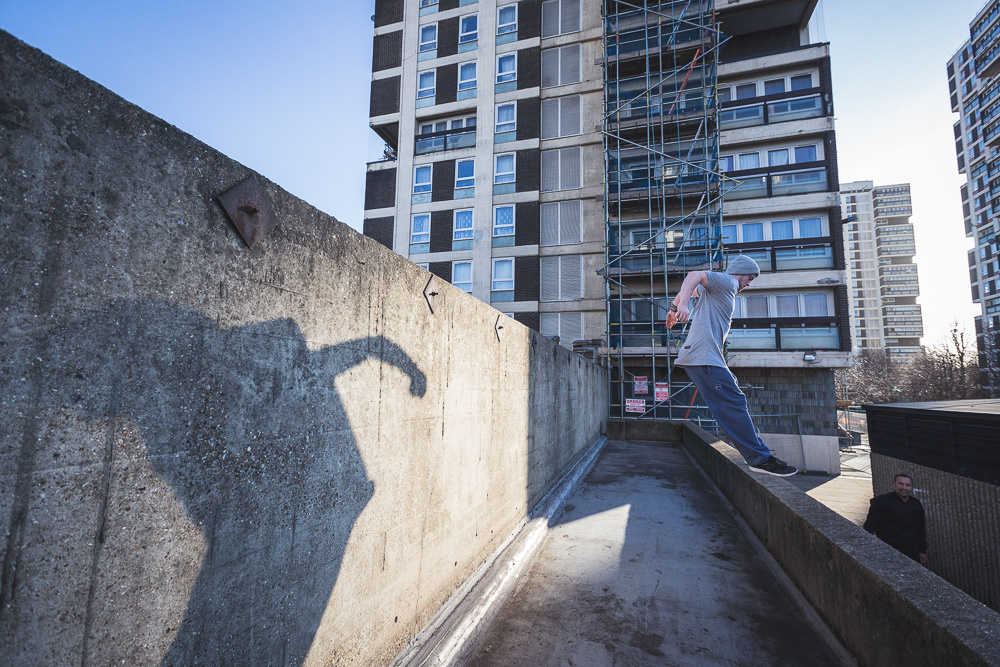 A longer lens would mean a greater focus on the body which, for me, would do a disservice to the other crucial element of parkour: the location. Parkour is a conversation with the terrain and it’s this relationship between the body and architecture that I find most fascinating and try to convey through my imagery. And what a location. The Wyndham Estate in Camberwell, London is as beautiful as it is ugly. To me, at least. Five brutalist blocks, 21 stories apiece, tower over a series of terraces divided by railings and walls. For parkour enthusiasts, it’s the perfect playground, offering endless opportunities for movement and improvisation (it’s also my choice of location for my parkour photography workshops). Respect for the residents is not overlooked; noise is kept to a minimum, no litter is left, and no damage is made to the estate. Those living there seem to welcome our presence (or are at worst indifferent), happy to see life brought to otherwise unused spaces and the joy gained from an architecture that is often regarded as ugly and unwanted.

Without architecture, parkour would be dance or gymnastics. Both rich disciplines with lots of photographic potential, but lacking the fear, grit, and dirt that the city’s streets provide. With architecture, it is an innovative, physical interaction with the city. Framing the body photographically in the context of the built environment is an attempt to communicate this relationship. 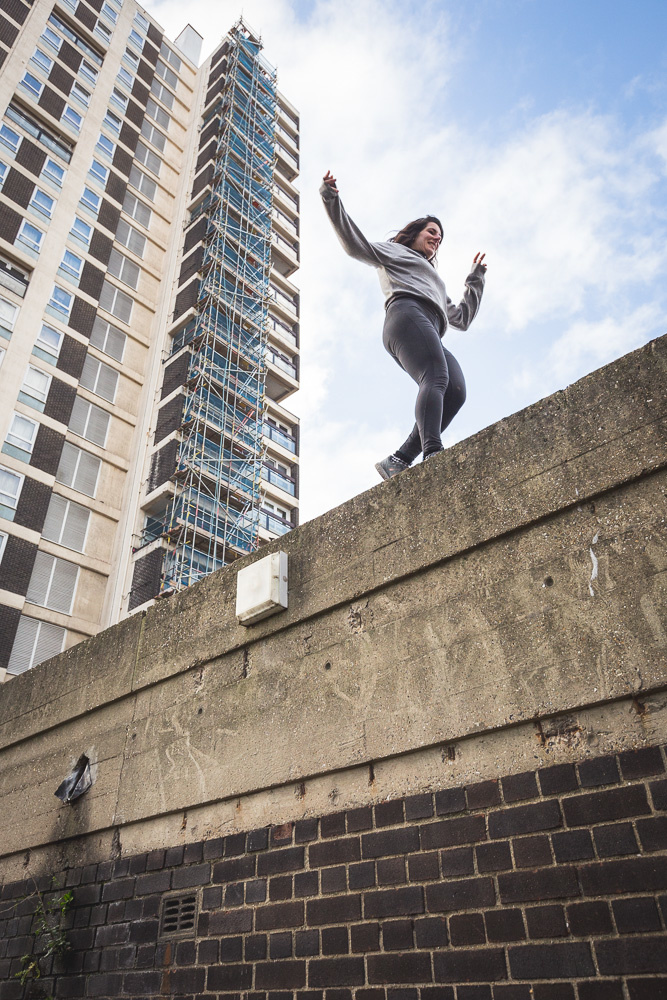 During my early career, photographing relative novices was much less appealing than shooting the elite athletes. By contrast, working with the beginners group at these events is now probably what I enjoy the most. My challenge is to use the photographic medium almost as a cheat, to pick out moments where they look supremely athletic and in control, despite them typically feeling clumsy, awkward, afraid, and incapable. Being able to give these images to the participants afterwards gives me a tremendous amount of pleasure as I know the potential that a good image has for creating a sense of accomplishment and pride in their achievements. As well as being about physicality, parkour is very much a mental game, offering opportunities for encounters with fear, and allowing participants to discover more about themselves as a result of these authentic, immediate experiences. The photograph can return the participant to that moment, allowing them to invest further in their effort, reaffirming to them what it meant to be completely absorbed in something that was outside of their comfort zone — a form of edgework that can be a fulfilling and transformative experience.

But there’s more to wanting to give beginners a nice memento go away with. When I first became involved in parkour, men jumping around in the city was radical. By contrast, it’s now relatively mainstream, co-opted by commercialism and very much a part of the public consciousness. What is definitely radical, however, are unlikely bodies in unlikely places, such as many of those that are not the elite performers and athletes with whom I usually work. Anyone doing parkour that’s not a white, middle-class, athletic young man is breaking the mould and, as a photographer, this is something I find fascinating. 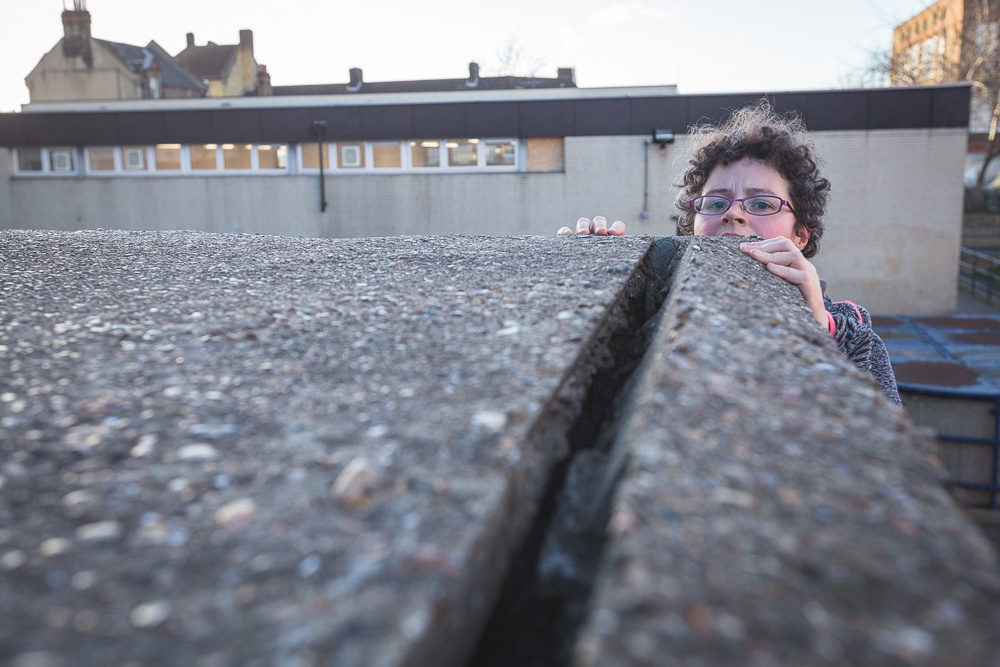 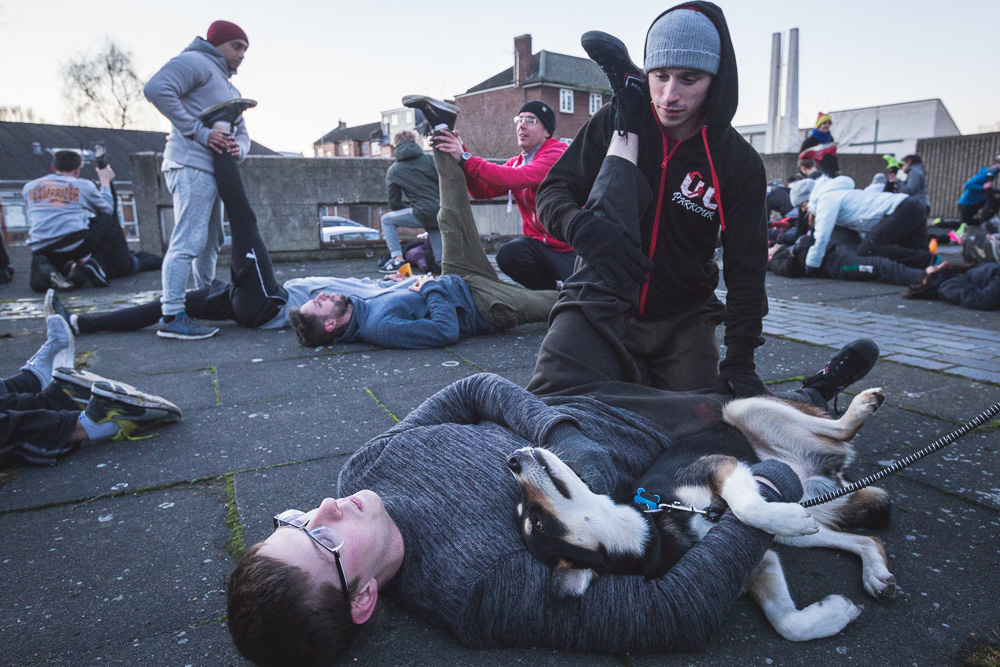 Ultimately, at each event that I shoot, I want to capture the spirit of the day’s training — the hard work, the discipline, the commitment, the inclusive atmosphere, the solidarity felt as a result of training together as part of a large group, and each person being on their own unique journey of progression.