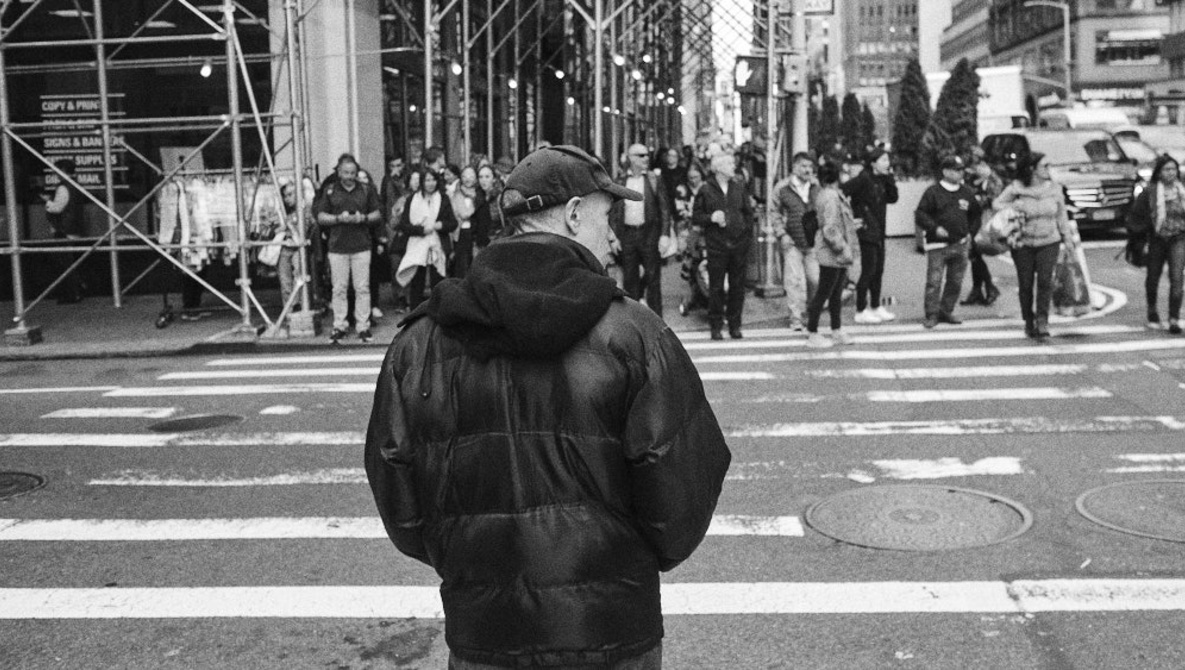 I spent 48 hours in New York City and took a bit of time to reflect on what makes for the perfect street photography camera.

Whether you are a professional photographer, a beginner, or an advanced enthusiast, there’s a good chance that at some point, you will find yourself wandering the streets of a new city feverishly snapping away at the sights and sounds of an exotic (or not so exotic) locale. For some, street photography is their main form of shooting. For others, like myself, it’s a fun way to reconnect with the basics of photography and practice the art of seeing. I don’t consider myself to be a born street shooter at all, but it’s part of my overall process of practicing my craft.

In Manhattan for meetings last week, I had the opportunity to spend more than my fair share of time alternating between crowded sidewalks and even more crowded subways. In Los Angeles, where we spend the majority of our out-of-home moments behind the wheel of a car, shouting expletives at the random dude in an SUV trying to swerve into your lane without looking, while trying to maintain our calm with the soothing tones of the latest NPR podcast, doing street photography requires more effort. Our city is spread out, and you generally have to fight through that aforementioned traffic jam just to get to a place worth shooting. But in New York, all you need to do is descend the five flights of your Harlem walkup out onto the street, and you’ll be immediately thrust out into a street photographer’s paradise.

All of which got me to thinking: “What is it that makes for a perfect street camera?”

When we begin as photographers, we tend to start out with a single camera body and a single lens. As times go by and either our career or simply our interest in the craft grows, it tends to lead to more purchases. More lenses. More camera bodies. Larger camera bodies. More accessories to hang from said camera bodies.

Pretty soon, we find our camera bag turned into the photographic equivalent of a hiker’s backpack, and after a few hours of shooting, we have to decide just how badly we want to take in that last tourist attraction.

And while, prior to becoming a professional photographer, I was more than happy to lug around a full DSLR with battery grip and a lens longer and heavier than a steel pipe, once you start making your living with the big cameras, the last thing you want to do on vacation or just out for a day of fun is lug around a heavy kit. 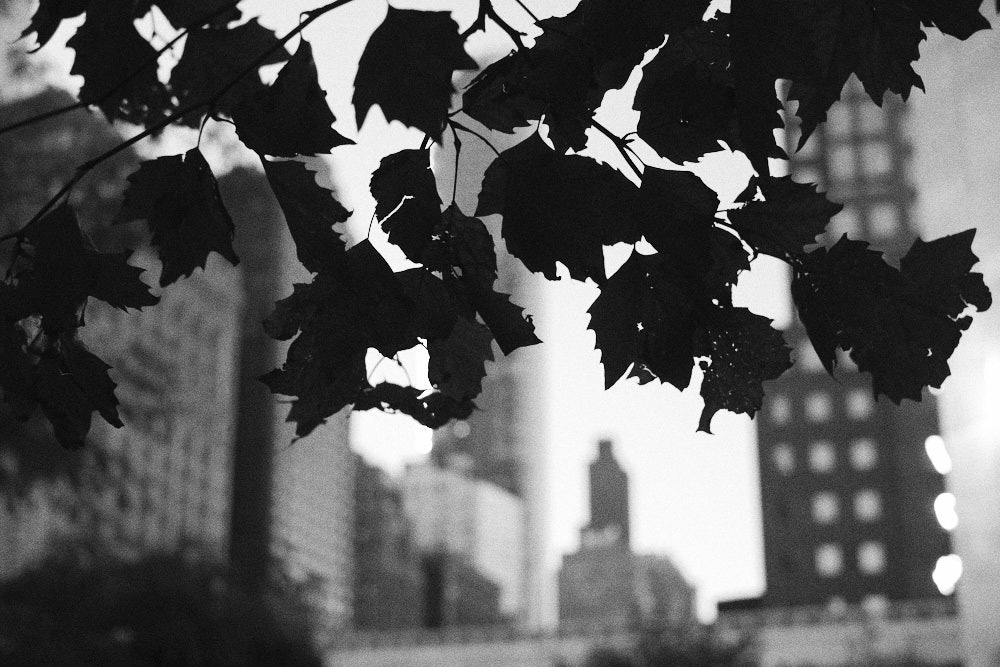 Picking up on the previous point, the ideal camera is not just lightweight, but small. And to be specific, a certain kind of small. As an example, on my recent trip to New York, I brought two cameras with me. I brought my Fuji X-T3. It’s one of my smaller cameras, but it is lightweight and more than capable of creating some great images. Seeing as my intention was to connect with a model friend of mine while in town, I wanted something capable of creating some great images that simultaneously wouldn’t weigh down my carry-on.

I also brought along my Fuji X100S. It’s the older sibling to the current X100F (and the future X100V?). It lacks the superior autofocus capabilities of the newer model and its megapixel count stands at 16 MP versus 24 MP, but it leads the X-T3 in one vital category. It is small. Very small.

This is important for many reasons, some of which I will touch on in a moment. But the most important reason for me is one of sheer practicality. I can fit it in my pocket. Maybe not in a pair of skinny jeans. And maybe not with anything else being able to join the camera in the same pocket. But it is small enough that it will just barely fit.

This means a lot of very important things. One, it means that I don’t have to carry my camera bag. It’s a fixed lens, so there’s no reason to carry extra lenses.  And, unless you opt for one of the teleconverters or wide adapters, it is completely self contained. When you’re going to be out all day, the ability to slide your camera into your pocket is invaluable.

For one, when I’m planning on being out on my feet all day in a city like New York, I want the freedom to roam. That means I don’t know exactly if I’m going to end up in a photo gallery or a movie theater or any place else, for that matter. And while you can wander into most photo galleries with a camera bag, bringing a camera bag full of photo/video gear into a movie theater might raise some eyebrows. If you’re willing to make the subway trip all the way back uptown, you might be able to go home to drop off the bag or maybe check the bag in with someone out front at the movie theater, but do you really want to leave thousands of dollars worth of camera gear with a stranger just to see Fast and Furious Part 87?

Having something pocketable also allows you to wander into areas you might otherwise feel uncomfortable in carrying an obvious camera bag. I love to simply wander when I’m taking street photos. You never know what you’ll find to shoot. But, just the same, you never know who you’ll find around the next turn either. Being able to slide the camera into your pocket and walk around without anyone knowing you even have a camera can provide a level of safety in the city until you get your bearings. 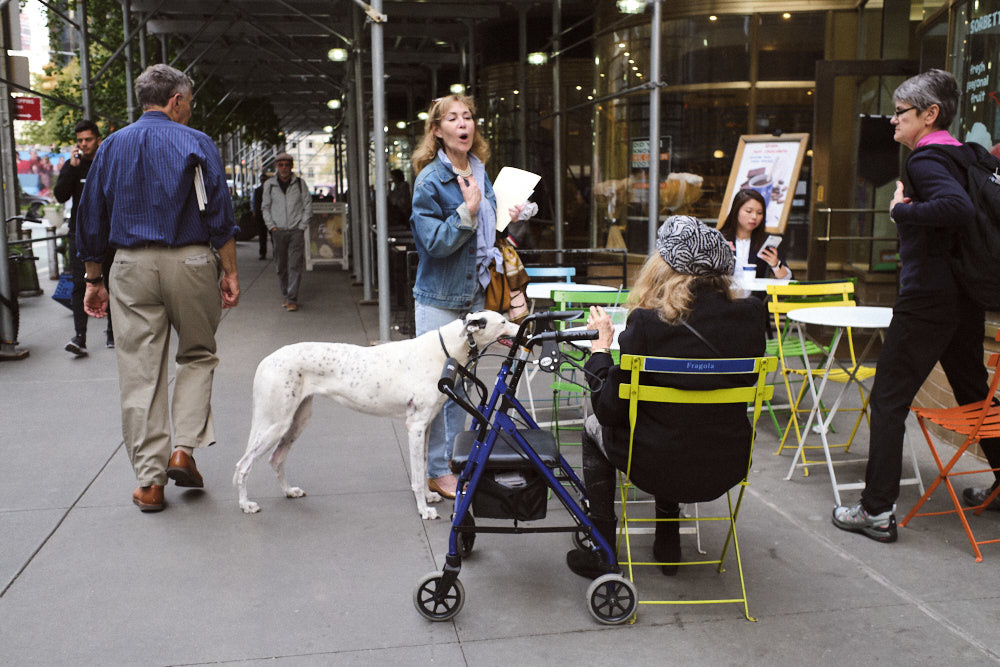 On at least one occasion during every one of my professional shoots, I will find myself staring through a viewfinder at a model, framing up what I feel is the perfect closeup. I will get swept away in the moment, and not until I lower the camera from my eye will it dawn on me just how much I’ve invaded the model’s personal space. Models, of course, are used to this. Strangers on the street? Not so much.

Your full frame DSLR with the massive 24-70mm f/2.8 might give you incredible bokeh and a great shot of a subject. But, if that subject is a stranger on the street, seeing you point that very combination at them may also generate a less than friendly response. We live in a hyper litigious society and in a world where photos are used in all types of places and for all types of reasons. Not all those reasons are good. So, strangers are more wary than ever of photographers taking their picture on the street. But a smaller, less “professional” looking camera can afford you the chance to take pictures that you might not get while drawing unwanted attention with a big DSLR.

I got to experience this firsthand during my trip. My plan was to shoot the whole thing with my Fuji X100S. But I quickly found that the camera, which I haven’t used in earnest for several years, runs through batteries like water. So, I quickly exhausted its energy and was left instead to shoot with my X-T3,

Now, the X-T3 is not a big camera by any means, but even the minor difference in size drew a notable change in the reaction I got when weaving in and out of crowds. I didn’t have any problems with anyone in particular. But far more people looked in my direction when I raised the X-T3 to my eye versus when I shot with the X100S.

Even while shooting with the X-T3, I got a different reaction when I was using a bigger lens like the 23mm f/1.4 versus the pancake lens, the 27mm f/2.8.

Remember, these are strangers you’re talking about. And, unless you’ve been brave enough to introduce yourself to them before snapping their picture, they will have reason to be suspicious. A less professional camera can help put them at ease and allow them to carry on with their normal day, which is likely what you wanted to capture in the first place. 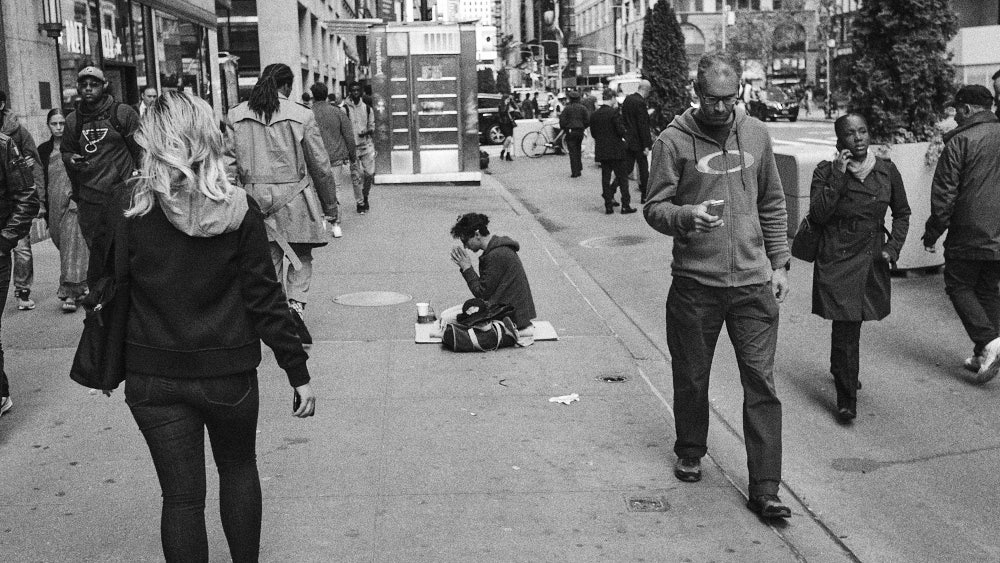 This one may just be my own personal preference. There are all kinds of street cameras that you can choose from that will meet the criteria I’ve suggested in my first couple points. They come in all brands and levels of investment. Personally, I prefer to spend as little as possible. This is both because I’m a cheap bastard and also out of an abundance of caution.

That doesn’t mean that I don’t want the camera to be a good camera. That doesn’t mean that I don’t care about image quality. It’s just that I realize that if I’m wandering around a city, going down strange alleys, and interacting with thousands of strangers, it’s likely that more than a few of those strangers may come with less than gallant intentions.

Should I find myself in a position where I am confronted with someone who wishes to relieve me of my expensive camera, I’d like the camera in question to be something I can afford to lose. No matter how expensive your camera is, it’s not as valuable as your safety. And if confronted with the option of giving up my camera or my well-being, I don’t want to have to think twice.

Even if it’s not such a dire situation, I want my street everyday camera to be something I have on me at all times. Not that I make a habit of leaving my camera places, but if I did, it wouldn’t be the first time I forgot something in my car or left it someplace I shouldn’t have. Having a less expensive machine to keep track of just limits the liability caused by my own stupidity. 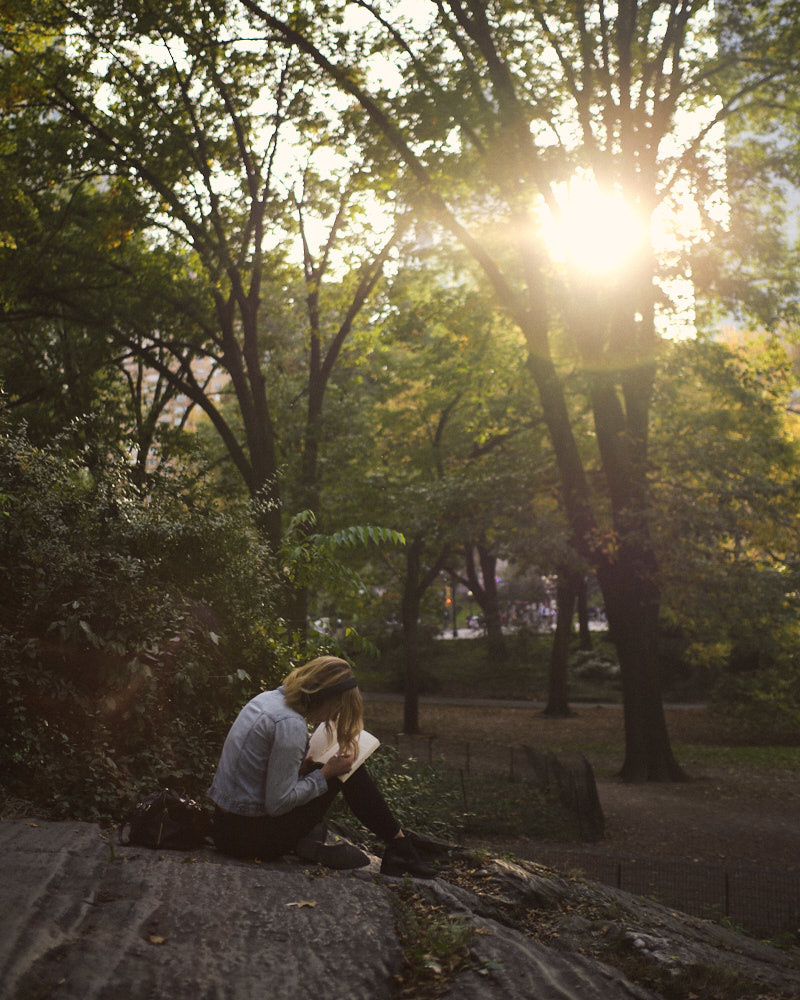 While the relative merits of resolution and its contribution to image quality can be debated until the cows come home, I prefer the highest resolution possible for another purely practical reason. In order to keep the size and weight of the camera down, it’s highly likely that best street camera will employ a fixed lens or it will be a small body with a prime versus a larger and more obtrusive zoom.

And while I’ve talked about why I like primes in the past, in the case of street photography, my enjoyment of primes is purely about the size and weight.

Now, while I’m working with a model, I always have the opportunity to zoom with my feet or reposition the subject when I want. On the street, things happen much more quickly, and zooming with you feet, unless you are Carl Lewis, might not get you there in time for the perfect moment.

This is where resolution comes in. For those times when you find yourself in a position where you have to capture the moment and can’t quite get close enough, you still have the option to crop in later while still retaining enough resolution to make a decent sized print. This may not be important if you never print your work, but it’s a nice option to have if it’s available.

So, what do you like to see in an everyday camera? I could have added several things to the list. Fast autofocus (for those who don’t zone focus) is a category in and of itself. Shooting on the street with the X-T3 face and eye detect was a real benefit. But, like I said, for me, street photography is more about fun and staying in touch with my photographic eye. What about those of you who primarily consider yourself street shooters? What would you add to the list?

Does Holding a Fuji Camera Give You a License to Be Obnoxious?

How to Take Pictures of Strangers