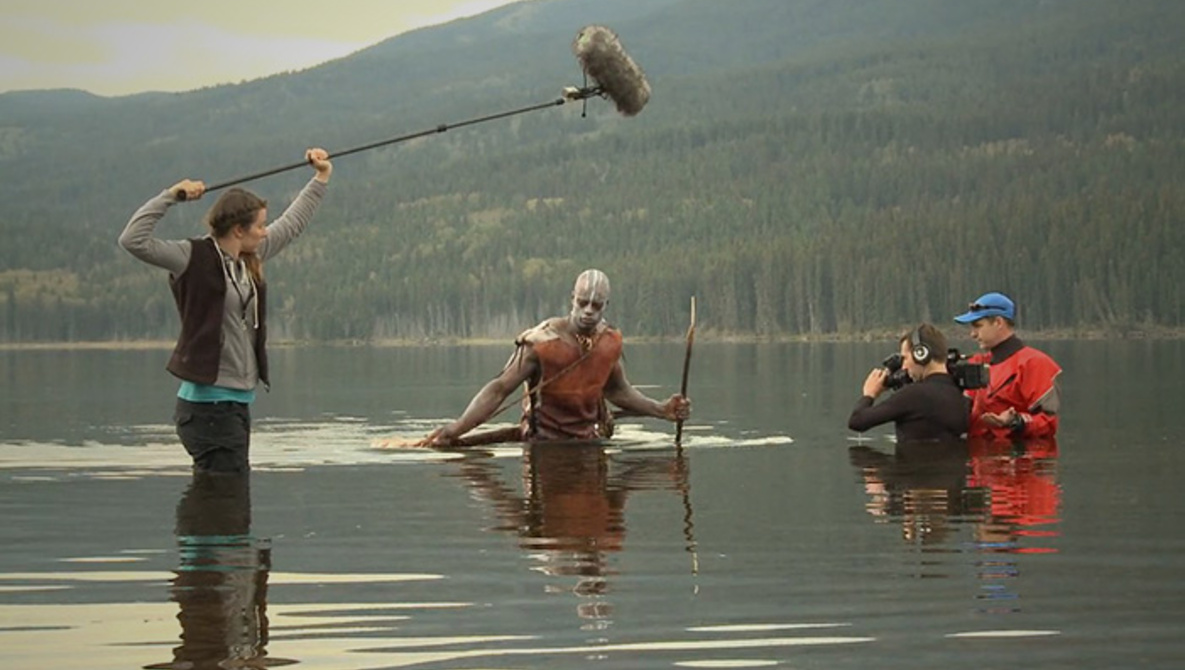 A group of filmmakers from Edmonton, Alberta have been working on a three-part science and nature documentary called The Great Human Odyssey. I recently spoke with some of the crew to learn more about how a production team approaches a project that involves planning and shooting in some of the most remote environments in the world. Check out their behind the scenes video, but read on for more videos and insight into their process.

The production crew traveled across 5 continents and 21 different countries during their journey to produce this docu-series. If you’ve watched the making of video above, then you’ll have a taste of what the crew found themselves doing, from being the first crew to film the Badjao, the world’s last breath-hold diving nomads, to capturing a traditional Inuit nest raid on 200-meter high sea cliffs near the Bering Strait.

I reached out to Assistant Editor Christina Ienna to inquire more about the editing process, but also dig a bit deeper into the production itself, which ended up totalling about 60TB in files and footage.

Brenda (Editor) began going through the footage and choosing “selects” in January 2014 and officially finalized the cut of the third episode in November 2014.

So how did they get there? Embarking on such a large project isn’t possible without a high-level of coordination and planning. Director of the project, Niobe Thompson, explained to me that their pre-production planning was an iterative process, and they couldn’t simply shoot interviews and then produce the b-roll after the fact.

We worked through a series of treatments, extended treatments, documentary outlines and then shooting plans. Each evolved from the last, as early research, development and location research progressed. We did not have the luxury of shooting interviews before recreations and adventure sequences – the shoots happened concurrently.

However, after final development and location research, filming took place over almost 24 months, with the crew and Director returning to follow certain pieces of research through a period of time. In the case of the Chukotka nest raiding scene, the crew returned a second time to complete the sequence, one year after the first, incomplete shoot.

Power in remote areas is always a concern. With professional-grade cameras and equipment, batteries would only take them so far, which in this case meant that the crew had to utilize compact generators.

Particularly with the heavy-lift aerials drone, our power charging needs were quite serious, and we could never work for more than 24 hours without access to good power.

When using multiple camera systems, getting footage from one to match up with another can be a tricky task for whomever is editing a project. Niobe expressed that the footage was actually able to cut together quite well.

We filmed with two identical 4K Sony F55 cameras, but the Red Epic, Phantom high-speed and DSLR (Canon 5D) footage mixed seamlessly with our A-Camera material. We take a lot of care with colour grading to match looks.

The film is currently in its final stages – grading, audio, film score, narration etc. Speaking of film score, another behind the scenes video was just released, that focuses on the how the score for the show was developed. You really get a sense of how much production value an original score created by an orchestra can add to a film project. Great stuff here.

Lastly, here is the trailer for the series, which premieres February 12, 2015 on CBC-TV:

How To Get the Most Out of a Photography Trip