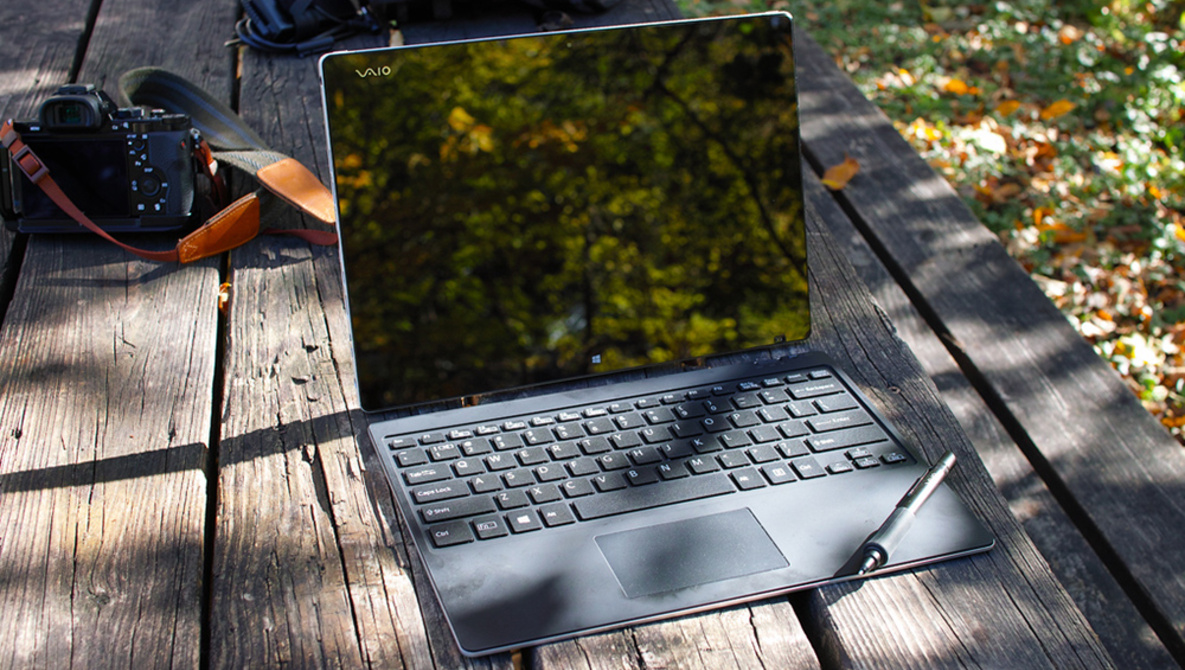 When on the go, a working photographer needs to balance portability, versatility, and power in everything they carry. The choice of computer while away from the home base is critical because it can dictate your capabilities and work potential over these periods of time. In this hands-on review, I take a look at the 12.3-inch VAIO Z Canvas tablet-laptop hybrid as a mobile workstation for photographers.

The VAIO Z Canvas was used as a machine to dump memory cards, perform image catalog organization, take on realistic editing tasks while mobile (not 50-layer PSB files of excruciating paid work), and be a source of entertainment on trips.

The Z Canvas from VAIO is made with a one-piece aluminum alloy cut body and uses robust six-sided tempered glass to up the ante in durability. There’s nothing about it that feels flimsy, and without dropping it I’ll have to take VAIO’s word on its strength.

The built-in stand on the Z Canvas allows the tablet to be set at different angles depending on how you are using it. Folding it all the way out works well for browsing and typing, and folding it down so the display is more angled is good for drawing with the stylus pen. The stand holds well for pen use and is stiff in the direction of folding it back inside the tablet. Folding it outwards has a lot less resistance. The stand foot is much more useful than the Surface Pro in my opinion because of the various angles allowed. However, the drawback is that it’s not wide enough to stand in your lap. Compounded by the keyboard not magnetically attaching to the bottom side of the display like a laptop design, you’ll need flat table to work on if you are not using the Z Canvas as a touch tablet. 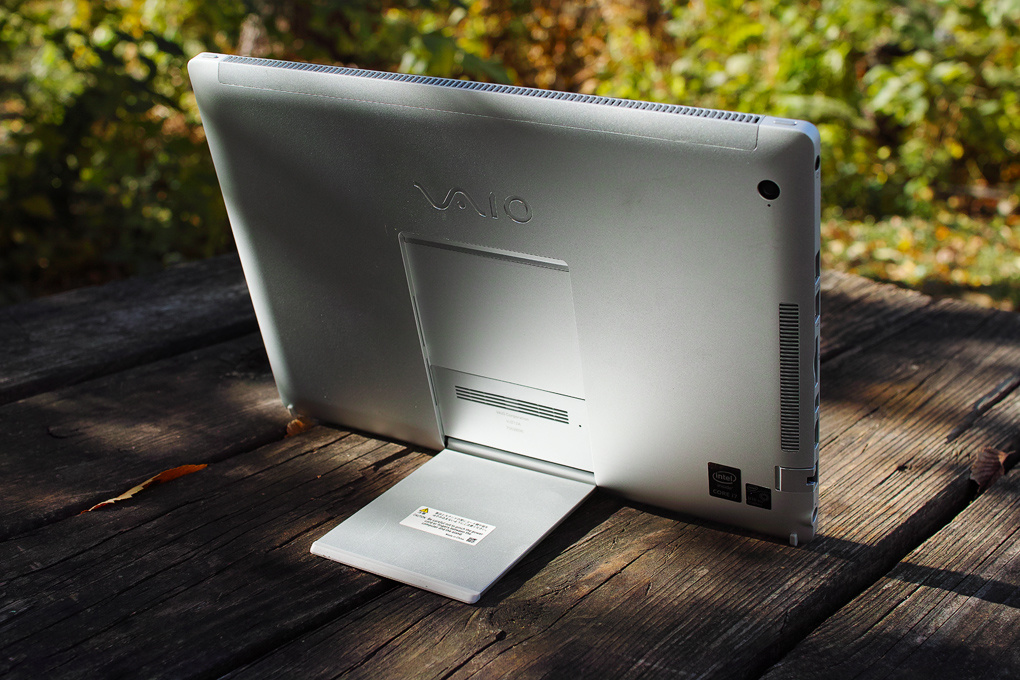 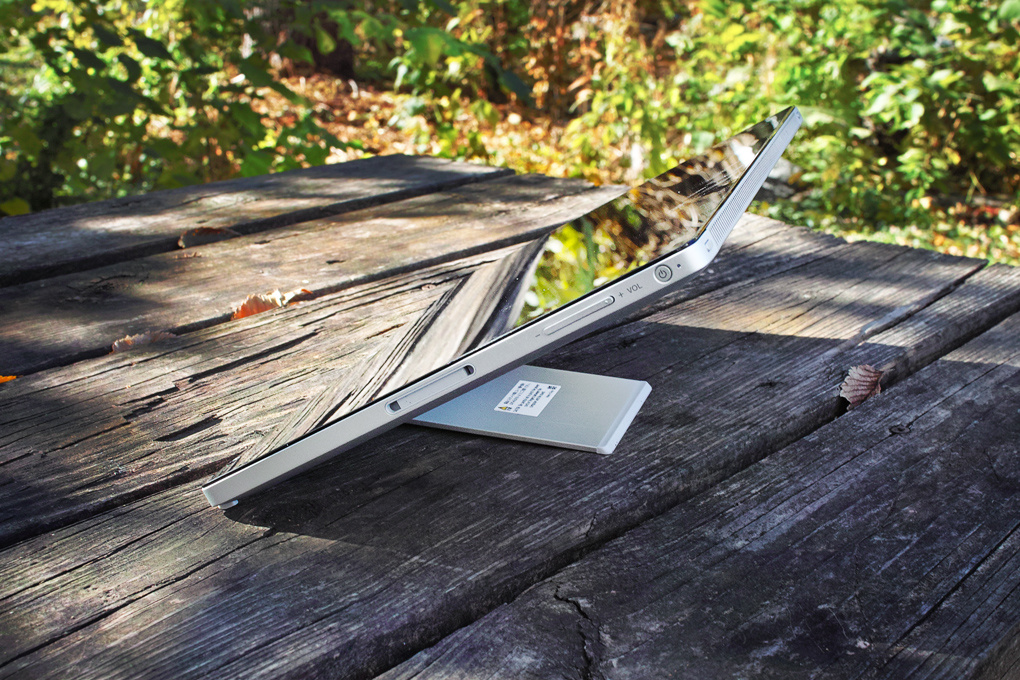 The stylus pen has 1,024 level of pressure sensitivity which can be customized to the user’s preference of hardness or softness. It’s comfortable to use and has two buttons on it for shortcut actions. You can quickly switch from pen mode to touch mode in Windows 10 so that your hand isn’t causing clicks when brushing with the pen.

A plastic detachable pen holder comes with the tablet and can be press fit into the side. I’ve had it fall off while grabbing the tablet from my bag, so it may be easy to lose.

Interestingly, after using the stylus to draw directly to my images, I realized I prefer using an off-screen drawing tablet to edit so that my hand isn’t covering up the screen and what I’m working on. This would probably be a different case if you were an illustrator creating objects from scratch, rather than a photographer using mask brushes and such for painting over image details that are already there. 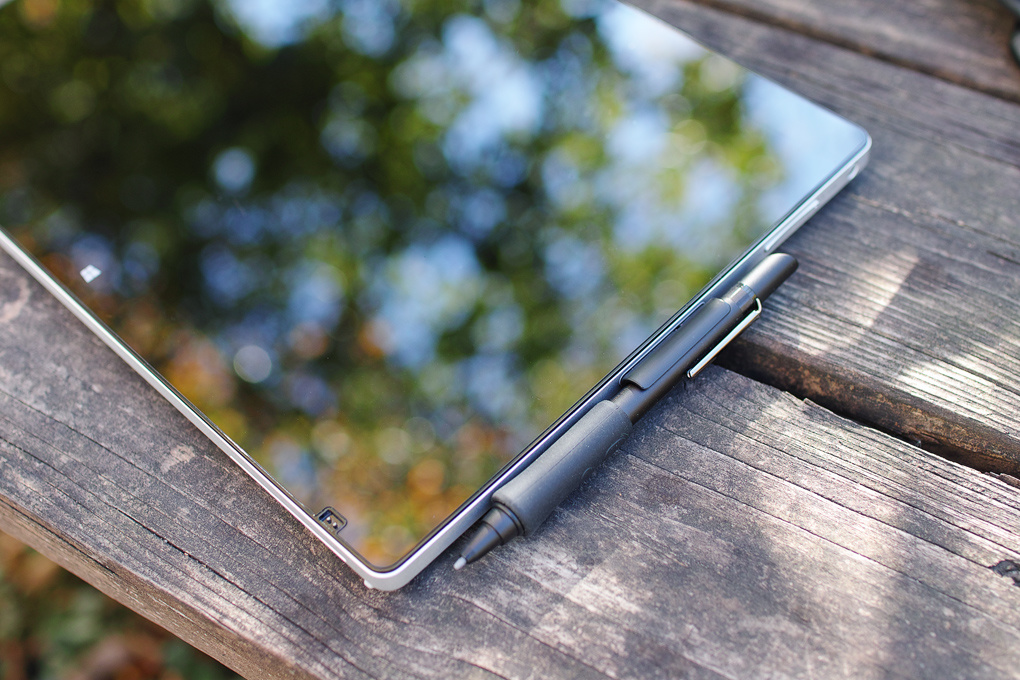 The full-size keyboard attaches key side in via magnets to the tablet for simplified transport. When in use, the keyboard is completely separate from the Z Canvas and connects wirelessly. For photo editing on a desk, this means that you can have the keyboard and tablet side by side, working with the pen in one hand on the tablet and hitting keyboard shortcuts with the other. I would have really appreciated having the keyboard able to connect to the bottom of the tablet for a clamshell style experience that is better suited for use without a desk available.

In one scenario of having the tablet propped up on a table surface and the wireless keyboard in your lap, I found it had too much flex in it. When you use the trackpad the bending that happens when you tap down to click would throw off the cursor on the display and you’d miss your click target.

Of course as a tablet, the keyboard is just an accessory. The on-screen keyboard is large and easy to type on with this wide display. I was surprised by how fast I was able to type with it.

In a related downside with the Z Canvas, the rubber feet on the back of the tablet only contact the table surface when using the stand and not while laying flat. The keyboard has them for laying the device flat, but if you’re setting down the tablet without the keyboard attached it’s going to scuff the computer over time. 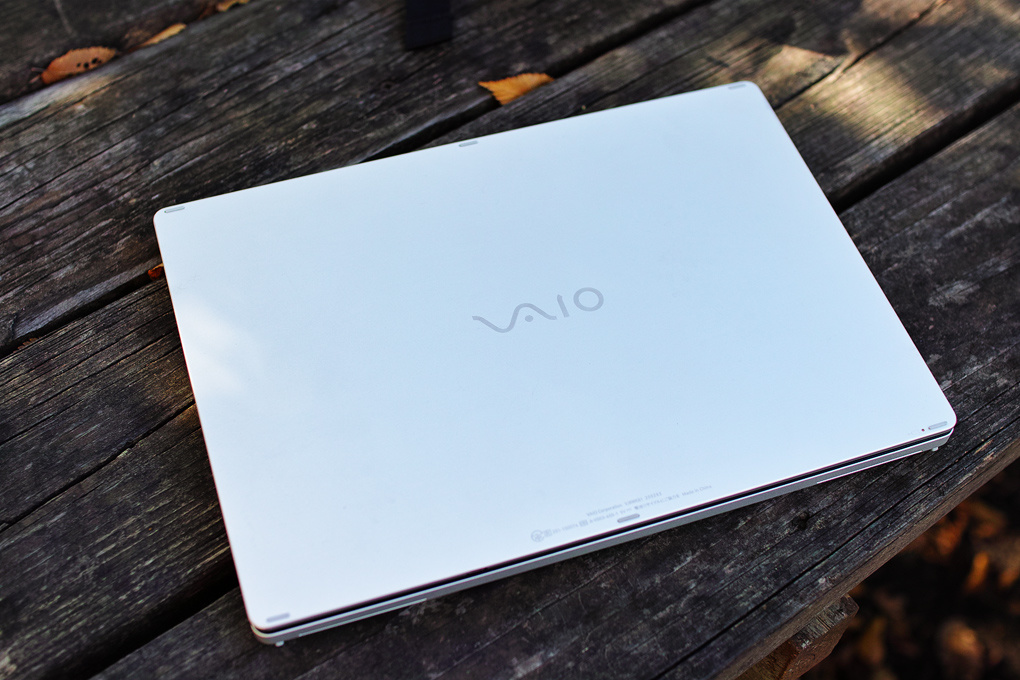 The 12.3-inch LCD IPS display has a screen resolution of 2560×1704. The glossiness can make it hard to see while outdoors, however it can at least get very bright to minimize the viewing difficulty (at the cost of power). It has an honorable 95 percent coverage of the Adobe RGB spectrum. Also because the Z Canvas is a full-fledged computer with a non-crippled operating system, monitor calibration with a colorimeter is possible. Just be sure to turn off the adaptive brightness setting hidden away in the system settings.

As an on-the-run machine, the ample ports available are a blessing in this day and age. The Z Canvas has most things you need: headphone jack, two USB 3.0 ports, SD memory card reader, HDMI output, Mini DisplayPort, LAN port, and a separate port for the power adapter. With the Mini DisplayPort and HDMI out ports, the tablet can handle dual output to 4K monitors. 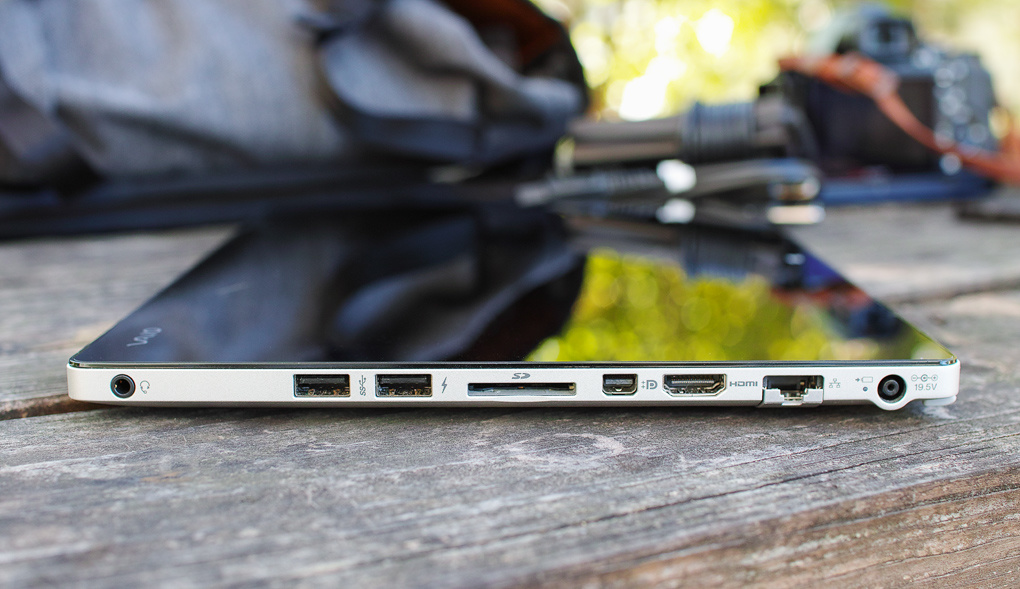 The Z Canvas contains a 63Wh high-capacity battery. Despite the high number, I wasn’t getting incredible battery life. Working on the machine using photo editing software would give me between three and four good hours of productivity. The i7 processor is likely demanding a lot of this battery, and for multi-day use, finding a power source is a requirement unless you really manage your work time wisely.

The tablet I’m using would give a 10 percent battery life warning prompt, but would then surprise you by automatically powering down at some point between 7 and 9 percent battery left according to the menu status. I learned quick that the 10 percent warning meant I was done.

The power adapter has a three-prong connector which limits plug in options while on the go compared to a MacBook’s two-prong plug.

One of the most important facets of this machine is the ability to handle Photoshop, Lightroom, Capture One Pro, and any other professional photography programs running without missing a beat. This was something I was specifically interested in from a standpoint of being away from home for a few days at a time while out photographing and wanting to complete low to medium intensive editing tasks while there was downtime in the shooting day. The performance the Z Canvas offers in this area is quite impressive, and I didn’t have any hiccups while working with large raw files. The three fans are sure to kick in to keep you company when layers start being added in Photoshop, but overall I was pleased with the results and reliability in this area. 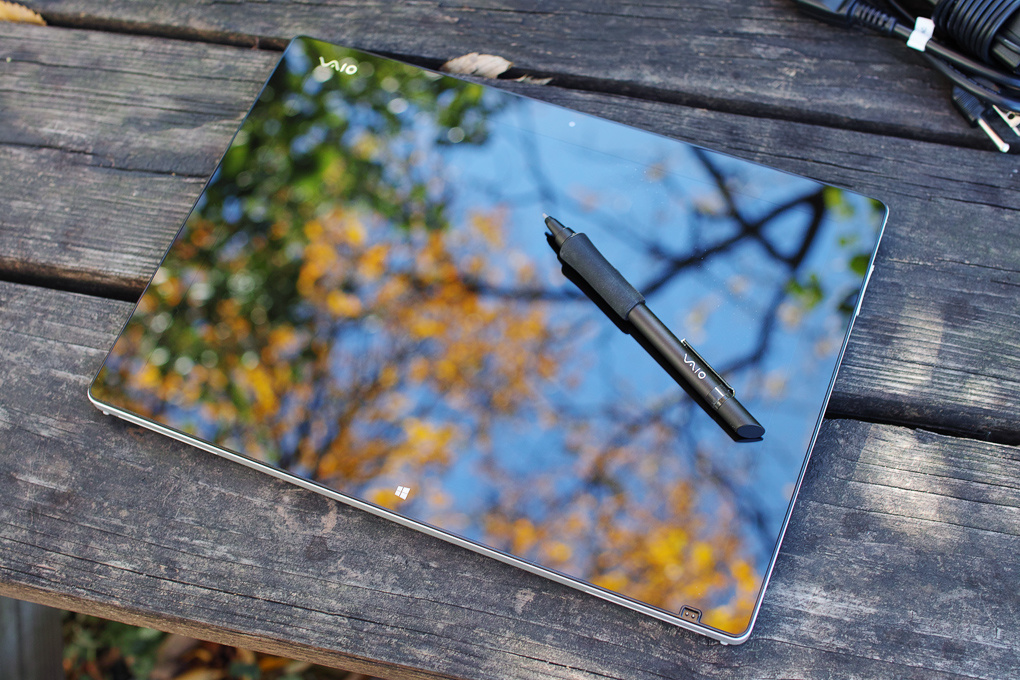 Windows 10 is a mess. I really, really wanted to like it going into this review, because if I found I liked it then that would open up a whole new world for me. It’s a more comforting thought to be stuck in the Apple ecosystem just because I like it, not also because it’s the only option I have. However, this is obviously just my personal take on the operating system. Fstoppers Writer Burak Erzincanli built up a custom PC last summer after being all-in on Macs, and according to him he said it’s easy to adapt to Windows 10 after a while. I’m a very visual-minded person, and so much I encountered in Windows 10 was downright ugly. I’ve heard a lot of Windows users agree with this, but still their priorities aren’t in the looks of their desktop and apps when there are other important factors to be considered when talking PC versus Mac.

From my experience with the Z Canvas, Windows 10 is also not optimized very well for touchscreen devices. There is a “tablet mode,” but I found that mode just introduces a worse computing experience rather than benefitting touchscreen users.

A couple things that had me stumped was not being able to figure out how to enable autocorrect (system settings showed it as enabled, but it wasn’t), and trying to disable tap-to-click on the trackpad. From troubleshooting online, apparently manufacturers can load in their own custom settings panels for Windows, and for whatever reason VAIO doesn’t allow you to disable tap-to-click whereas other manufacturers have this option. The amount of mis-clicks and accidental opening or dragging of files was maddening and there was no stopping it.

Overall, the VAIO Z Canvas is a very capable computer for processing images and working with large files on the go. It does have a bit of that all-in-one flair to it that makes it an attractive mobile machine for photographers and other creatives, but by being so many different things it comes at a cost. You can have the power but it will cost you battery life; You can have the wireless keyboard connectivity but it will cost you the “lap” in laptop; You can do this, that, and the other but there’s a hefty price to pay.

The Vaio Z Canvas is available now through Amazon or the VAIO website.

Series Documents the Dangerous, Fascinating Work of Commercial Fishermen on the Bering Sea