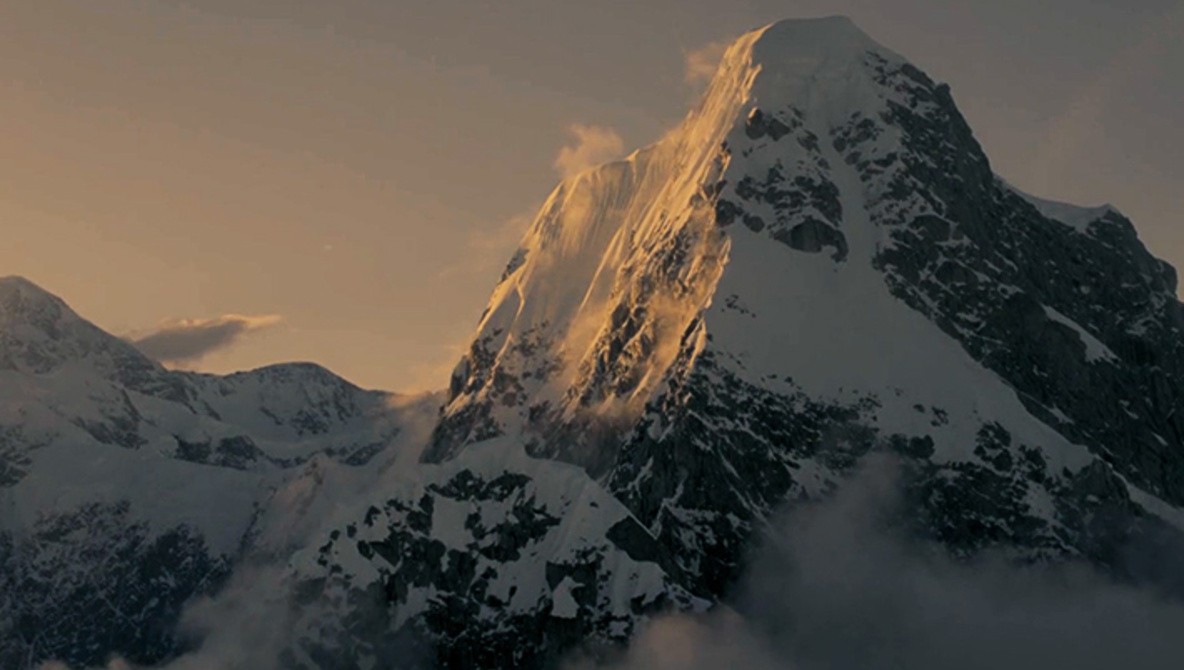 How Camp 4 Collective Creates Cinematic Aerial Video With The Cineflex

Camp 4 Collective is an adventure film production group with clients like RedBull, The North Face, and National Geographic, so they are often found at the edge of the world, camera equipment in tow. Recently, some of the Camp 4 team traveled to Alaska to shoot some aerial footage. In this video, Anson Fogel explains the Cineflex helicopter camera system, and in the full post he and Tim Kemple answer my questions about its controls, production costs, and what it’s like to play in helicopters.

So what were Tim Kemple, Anson Fogel, and others from the Camp 4 crew doing in Alaska? Their partner in crime Renan Ozturk was getting some footage for a personal film project about the history of exploration in the mountains of Denali National Park called “Sanctity of Space.” He suggested that Anson and Tim come out to shoot some aerials of the Alaska Range with a Cineflex from a helicopter, and with the lure of “helicopters and good beer,” they easily agreed to provide some extra coverage.

Getting to Alaska with a rough gameplan to fly around the mountains was a very small piece of the production pie though. The logistics and coordination for this kind of effort didn’t come without work. Tim explained, “You need four important things in order to shoot Cineflex. The first is a helicopter that can reliably fly the weight of the camera system (about 100lbs) with operator, director and pilot to the altitude you need. The second is skilled operators (both a pilot and Cineflex operator). Third you need the Cineflex (Usually when you hire the camera you have to hire an operator). Fourth you need to fill out a lot of paperwork insurance, permits, etc.”

The third item Tim mentioned above was having an operator for the Cineflex. Recently added to the Camp 4 team, Anson Fogel had the skills to operate it, so that saved having to add an additional person to the crew. Why do you need a specific operator you might ask? Well, if you reference the featured video at about 2:15, you’ll see that the controls for the camera are quite a departure from your typical handheld DSLR or video camera. In fact, it looks more like this. I can only imagine that operating it might feel a bit less ‘natural’ or ‘fluid’, unless you’ve spent time in broadcast environments running robotic cameras and CCUs. I asked Anson what the experience was like using the Cineflex controller. “It takes some time to develop the muscle memory and skills to be able to press the right combination of buttons quickly when it matters. Operators typically go to training and get certified to mount, operate and troubleshoot CineFlex – it’s not something most people can just jump in and do.” Tim added that it helps to be “really good at video games.”

Apart from simply operating the Cineflex system, knowing what your system can do is as important as operating it. Even the best helicopter pilot and Cineflex operator in the world won’t return with good footage if it’s over or under exposed. Working with snowy landscapes that can easily clip and dealing with harsh daylight that creates shadows without any detail, are challenges for any video or stills shooter. Anson shared with me that shooting with the Cineflex is not far removed from working with other systems, when it comes to getting proper exposure. 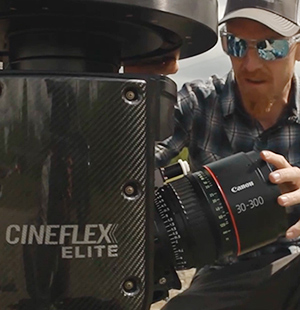 “Each camera sensor or film stock has a particular latitude and response curve, and thus behaves in high contrast scenes in different ways. The CineFlex Elite uses one of the highest latitude digital cameras out there, the Alexa – it has about 14 stops of useful latitude if its treated carefully both shooting and in post. If the scene presents values within the latitude of your camera, typically you have exposure tools that tell you that, and you would expose for the highlights. If the scene exceeds the camera’s latitude, you have to make decisions about losing shadow detail, or blowing highlights. And how that decision is made is based on knowing what you can do in post with that scene, and adjusting based on that, quickly. So, know your camera, and then carefully expose.”

So you’ve got a skilled crew, you know how to operate this sweet helicopter camera, and the mountains are sitting there, waiting for you to capture them! Well, not quite. Just as in other productions that aren’t thousands of feet in the air, multiple takes are sometimes needed, and you need to be able to adjust on the fly (small pun intended) with changing weather and light conditions. In the case for Tim, Anson, and the pilot, communication was crucial for success. Tim explained: “While Anson has his face buried in the monitor doing complicated maneuvers (and communicating with the Pilot) I am on the look out for shots, and coordinating talent. I guess in a lot of ways Anson dealt with the details and I try and observe the bigger picture.” Anson added, “I coordinate on the ground carefully in advance so we have a plan, and a common language. Then for each ‘move’ (the pilot flies the move) we talk about it, get the heli in the ‘start’ position, and fly the move. Typically, for more complex moves, it takes 2-3 times to get it just right with a badass pilot and the right communication from the operator. Often, we get it the first try. And just as often, we vary the move to experiment with different framing and movement.”

So are you ready to add some epic aerial footage to your next project? I know I am. But you’ll need a budget that can afford it, as believe it or not, this isn’t a cheap expense for the average Craigslist client. Cineflex systems with an operator can range anywhere between $4,000 to $10,000 a day. Oh yeah, you’ll need a helicopter to, those only go for about $1,500-$2,000 an hour in some places. Tim suggested the price can vary a lot depending on where in the world you are, and the specifics of what you need. “It really depends on where in the world you are. In Europe there is a B3 that has a Cineflex permanently mounted on it — its relatively cheap! Do you have to shuttle the helicopter in? Do you have to hire an operator? How many hours of flight time? How much does fuel cost where you are flying – it varies quite a lot.”

So while it doesn’t come cheap, you can’t argue with the results. In these kinds of environments, using a cheaper solution just wouldn’t cut it. You can see in the video towards the end there is a split-screen of the Cineflex footage next to footage from a GoPro that was mounted to the heli. Tim did reveal though that shooting with a RED from the inside of the helicopter was actually usable. “During the shoot we also shot RED Epic out of the door of the Heli (this looks amazing warp stabilized in Premiere), RX100 from the mountain side and GoPros everywhere. Still for aerial capture nothing comes close to the Cineflex Elite – even having shot numerous times using RC systems.”

Camp 4 Collective recently did a re-branding of their company, including a new logo, website, and work reel, featuring some of the incredible work that their partners have made over the last year or two. If you’d like to see 3 minutes of visual candy with a healthy dose of cinematic adventure, give this a watch. You’ll see some clips from this Alaska shoot made it into the final cut, at the surprise of no one.

If you haven’t heard of Camp 4 Collective or seen much of their work previously, definitely check out their films on Vimeo, and keep posted on their cinematic adventure shenanigans on Facebook. Huge thanks to Tim Kemple and Anson Fogel for taking the time to answer questions!

Here’s the Camp 4 Collective blog post with more information about this trip and project.

Photographing the World’s Most Dangerous Church

‘Whispering Iceland’ – Further Proof that Iceland is Disneyland for Photographers