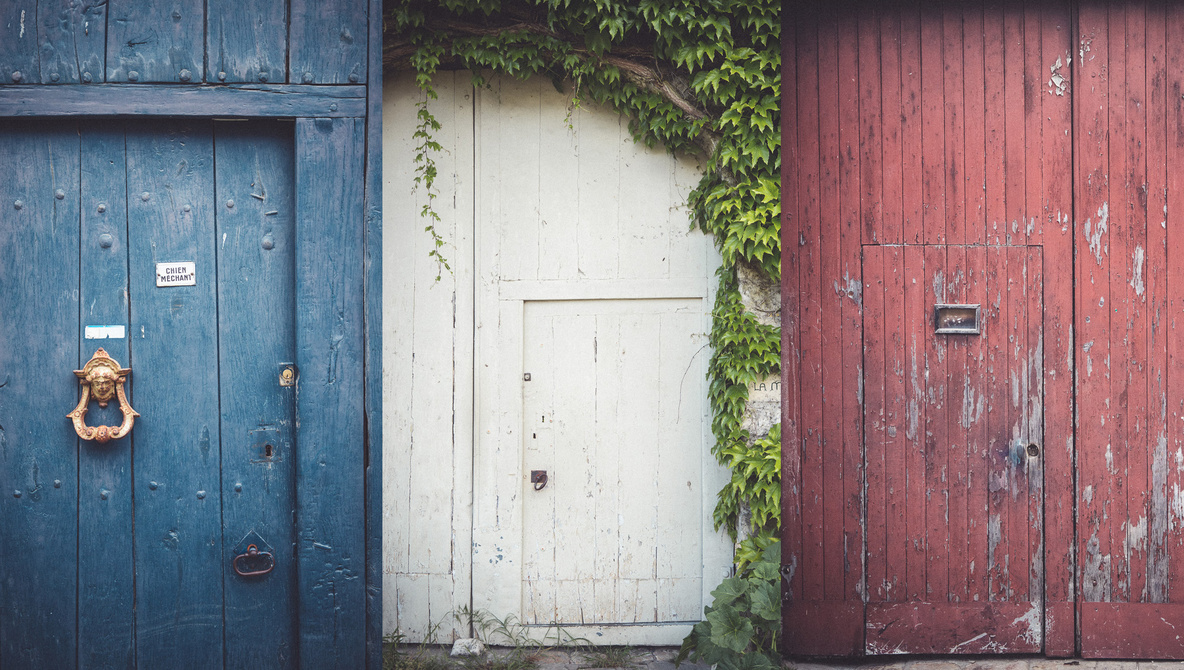 Lockdown in France came into place in mid-March. To leave the house, I have to fill out a form explaining my reasons and carry it with me or risk facing a fine of €135. Aside from the occasional trip to the supermarket, this typically means up to an hour’s walk each day with our dog, during which I have to stay within two-thirds of a mile (one kilometer) of our home.

While confinement has not been fun, we’re incredibly grateful to be already fairly isolated here in rural France. We live just on the edge of the commuter belt for Paris which means that we wouldn’t have to travel far to find hospitals full of COVID-19 patients. However, we’ve remained untouched, more concerned with when we will next see our loved ones back in England and Poland.

With all of my work for the next couple of months canceled, I’ve stumbled upon something of an obsession: doors. Many of the houses in our village are more than two hundred years old and their wooden doors and gates might easily be just as old. After I nudged myself into taking my camera with me on every dog walk, I suddenly found myself drawn to the fading and flaking paint and beautiful textures. It’s become a random project to give me something to fiddle with in Lightroom, and an excuse to take the dog on even more walks than he’s already getting.

A few months ago I was inspired by one of Evan Ranft’s short videos on small-town photography. My village, while pretty, certainly doesn’t attract photographers seeking out quaint visions of idyllic rural life. There are too many cars parked nose to tail along the streets, and the power cables running overhead definitely don’t help. There’s an official “village de caractère” a few miles away — complete with architectural follies and upsettingly neat topiary — that puts our village to shame.

Our village might not be nationally recognised for its character, but it does have a 13th-century church and a lot of flowers.

Despite the lack of adorably French features, the small details on my doorstep are rather wonderful. As most photographers will know, the everyday elements that you might typically look past can suddenly spring to life once there’s a camera in your pocket. Plus, as it’s a personal project, I can be as bold as I like with the edits, indulging in my love of vignettes and heavy grain to my heart’s content.

We’ve been blessed with some glorious sunshine over the last seven or eight weeks. For the doors, I’ve been waiting for overcast mornings, craving light that’s as flat as possible so that the resulting images are not too strong in contrast.

A few months ago, I splashed out on a batch of Kodachrome presets designed and sold by one of my favorite YouTube photographers and educators, Jamie Windsor. While I’ve not been using them extensively (though accurate, they’re often a bit too contrasty for my liking), they’ve helped me to explore different ways of seeing color than I would otherwise. This was actually the first time I ever paid for a pack of presets, happily supporting a creative whose work I respect. I’d urge you to do the same. For me, they work best in overcast conditions, and I’m fascinated to have discovered the level of detail that Windsor has attempted in replicating various film stocks that date back as far as 1935.

All of my doorways and village explorations were shot on my tiny Samyang/Rokinon 35mm f/2.8, a lens that I love for its near-pancake size. It’s surprisingly sharp for its stature, the autofocus is snappy, and it means that my Sony a7 III squeezes into my jacket pocket. Samyang/Rokinon wasn’t on my radar when I switched to Sony a few years ago, but I think the wealth of affordable third party lenses currently available keep Sony as the best option for money-conscious shooters looking to step up to full-frame.

The other random discovery that’s emerged as a result of this miniature project is that I believe 8×11 to be my new favored ratio for portrait orientation images. The native 2×3 ratio of the 35mm format is too tall, while the 4×5 ratio imposed on us by Instagram is too fat. 8×11 sits perfectly in between, giving me a feeling of balance.

So what are they for? Not much, beyond personal indulgence, sharing on Twitter, and sending to my friends and family — not to mention that it keeps me busy (occasionally), makes me feel productive, even if what I’m making exists simply in order to exist. Sometimes, that’s enough. If I ever share them with my fellow villagers (I have no idea what they would make of them), I hope they won’t be too alarmed by my new obsession.

Everyone should have a favorite door. Which is yours? And which seemingly pointless projects are keeping your creative juices flowing through this surreal period? Thanks for humoring me and I look forward to your comments below.

Our village might not be nationally recognised for its character, but it does have a 13th-century church and a lot of flowers.