I Turned a 600mm Into a Macro Lens: This Is What Happened 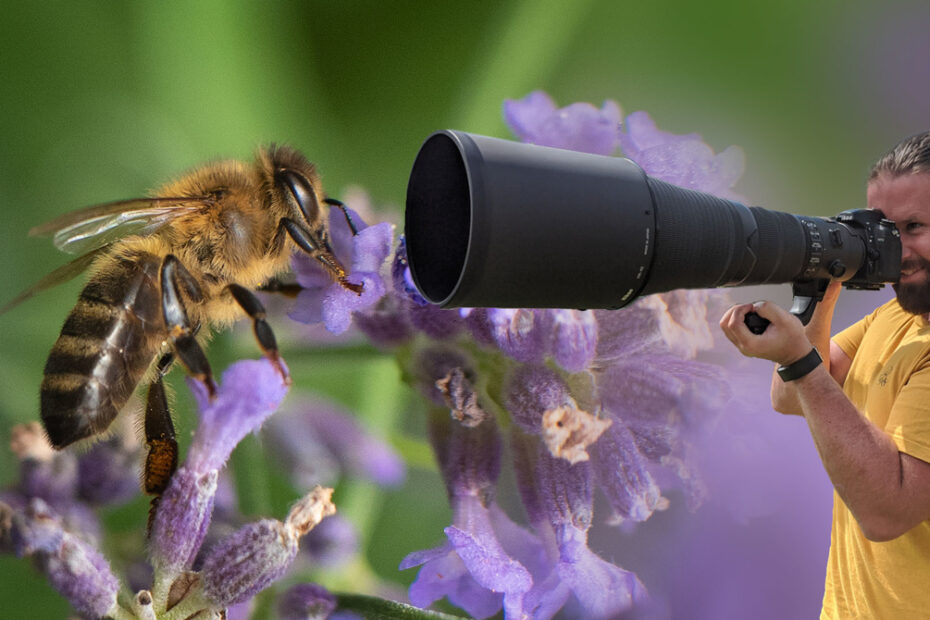 I Turned a 600mm Into a Macro Lens: This Is What Happened

I wanted to see if I could turn a 600mm telephoto lens into a makeshift macro lens. Did I manage to get any decent macro photos out of it? You tell me.

I love macro photography, and I find great pleasure in doing it without the need to purchase a macro lens. There’s something about camera hacks that I just adore: being able to make your own DIY setup and still get amazing photographs really appeals to me. Usually, it’s because I get to save money and acquire great shots at the same time. But in this case, I just wanted to see what would happen if I took a $12,000 AF-S NIKKOR 600mm f/4E FL ED VR lens and stacked it with 68mm of extension tubes for macro photographs.
Did I fail? Did I succeed? You be the judge.

The standard minimum focusing distance of the AF-S NIKKOR 600mm f/4E FL ED VR is 4.4 meters, which, for macro photography, is useless. You want to get as close as possible for the given focal length in order to capture details you wouldn’t normally see with the naked eye. That’s why macro lenses focus close to the lens.

The AF-S NIKKOR 600mm f/4E FL ED VR is normally reserved for wildlife and sports photography, but I’ve modified the experience with the use of extension tubes

Longer focal length macro lenses can benefit from a greater working distance, and that means you can stand farther back from your macro subject and still get close-up shots. A long working distance is ideal for shooting invertebrates and other live subjects that scare easily but doesn’t really make much of a difference for other macro subjects such as products for commercial purposes. So, what’s it like shooting macro on a 600mm lens, and how did I do it?

When I say I turned the 600mm lens into a macro, I’m being a little hyperbolic. What I actually did was place extension tubes between the camera and the lens. Extension tubes are essentially just rings that have no glass in the middle and are designed to set the lens farther away from the image sensor, thereby forcing the point of focus to converge nearer the end of the lens.

I Had Some Issues

With lenses of this size and weight, you mount the camera to the lens, and not the other way around. Another practical step you take is to hold the setup via the lens tripod collar when carrying it around to avoid putting stress on the lens mount and risk breaking it. However, because I used all three of my Opteka AF extension tubes, I was adding three other possible places for lost connections. It may be for this reason or perhaps the fact that I was using $70 extension tubes on a $12,000 telephoto lens, but I noticed the lens wasn’t happy on this setup. There was intermittent shuddering, which I think may have been a communication issue between the VR in the lens and the camera body; either way, it was still useable, but it didn’t fill me with confidence while experimenting.

This beast weighs nearly 4 kg, and holding it up without a tripod is something that even bodybuilder Terry Crews would struggle with. It’s not just the weight but the length of it that’ll burn your delts and biceps, as it’s 432 mm (17″) long. Luckily, it has four stops of vibration reduction (image stabilization to you and me), so it’ll hold the picture rock-steady when you need it, but even so, I wouldn’t recommend this for following butterflies around the garden unless you want to be a weightlifter.

The focus ring on this lens is huge and has an enormous amount of fine-tuning precision. You can turn the focus ring round one or two inches and have only a small focus change through the viewfinder. This kind of accuracy is essential for macro photography, because it means placing focus on exactly the right part of the subject. I loved capturing honeybees on the lavender using manual focus, because I could get the focus right on the bee’s eye.

I shot this honeybee on some lavender from 2.5 meters away, which meant I didn’t disturb it as it searched for pollen

With all three of the extension tubes on, I had a combined 68 mm of extension on the lens, and that changed the minimum focusing distance from 4.4 meters to 2.5 meters. Now, I can tell you for a fact that I didn’t get a 1:1 reproduction ratio (whereby the size of the subject takes up the same size on the image sensor), but it was still pretty close-up.

Even at 100% crop, the shots were incredibly sharp, which shows off the optical clarity of the lens

As you might expect from a lens this expensive and no macro filters getting in the way, the photographs were razor sharp. It looks just as sharp as other macro lenses I’ve tried out in the past, and I can’t fault it. The only issue I had optically was the vignetting that occurred around the edge of the frame, but that was as a result of my use of extension tubes and not the fault of the lens.

Would I Use It Again?

I managed to get some great macro shots using this make-shift setup, but it’s not something I’d like to take around every day

So, yes, you can use a 600mm lens with extension tubes to take macro photos, but I wouldn’t recommend it. It’s a ridiculous lump to lug around when out in the field, but by gosh, it was hilarious to do! My neighbor came out while I was capturing the buddleia, and he thought I had a rocket launcher! In all my time of reversing lenses, stacking extension tubes, and doing all sorts of crazy things to get macro photos without a macro lens, this has to be one of the silliest ways of going about it. But hey, it worked.

I managed to capture some nice close-up shots, despite perhaps not being exactly a genuine 1:1 reproduction ratio macro, and it was all pretty instant and simple. It’s obviously not something anyone would ever seriously entertain because it’s so expensive and heavy, but it’s important to experiment and try new things out.