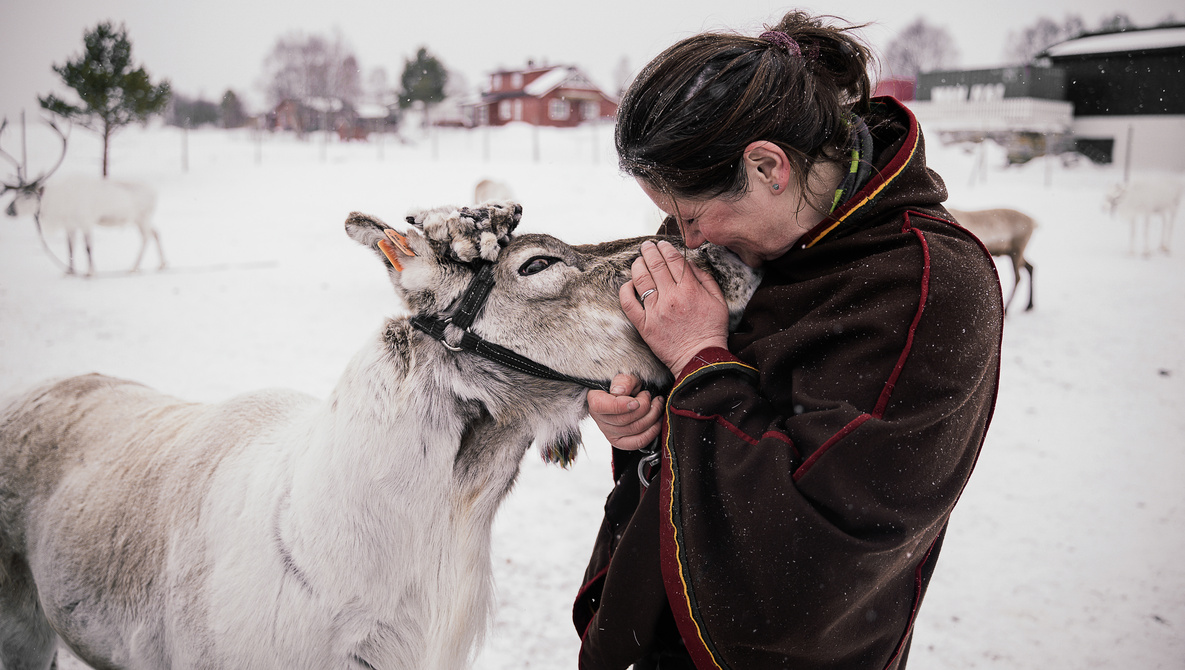 Into the Wild With the Reindeer of Norway and Sami Culture

I, like many, enjoy traveling a little off the beaten track; far enough that I experience the unique, but not so far that I end up eating berries in a hollowed-out bus. Enter the reindeer of Røros.

On a cold and dark March morning, my girlfriend (Liz, herein) and I climbed into the rental car, which had been upgraded to a 4×4, an astute decision. Despite the lack of natural light — and artificial light for that matter, given our cabin was an hour from anything substantial — you could tell the clouds hung heavily. They seemed lower than ordinary, but I kept the sense of foreboding to myself. I needn’t have bothered; the five hour drive through rural Norway, from central eastern Oppland to Røros near the border of Sweden, was going to be primarily through a blizzard, starting immediately.

(Filmed by the passenger as we made our way through one of the few “towns” en route.)

Away from major cities and their occasional long highways, Norway is tricky to navigate. We had a built-in sat nav in the car, and I was using my phone for Google Maps, but neither had enough data to give any sort of word on the state of back roads. Generally speaking, all roads with regular use sees constant gritting and plowing by local volunteers, but a lot of the roads we were driving were a little too “path less traveled.” After an hour through landscapes with more mountains than houses, driving through difficult conditions, I hit an area where snow had avalanched onto the road. I had to do a 46-point u-turn, and drive nearly an hour back on myself to try a different route. The journey continued in a similar theme for its duration, but we eventually arrived at an innocuous, working farm.

Røros is a traditional Norwegian town, with wooden buildings and wide, arcing landscapes. Due to its many authentic buildings and culture dating back as far as 1644, it has been a UNESCO World Heritage site since 1980. The whole area is understated, and when blanketed in a thick layer of icing, you could be forgiven for thinking you’re in the wilderness at times. Rørosrein, our destination, is no different, and upon edging onto their property, you couldn’t be certain you were even in the right place.

Liz and I changed in to thermals and ski clothing and stepped out into the cold, greeted in contrastingly warm way by Karianne. I’m going to break the chronological order of this article to discuss our host for this day with all that I learned about her, as it’s central to our experience and the authenticity of everything we did. However, so as not to put the cart before the reindeer, I need to explain the indigenous people of this area and their relationship with reindeer: the Sami people.

The Sami people are one of the oldest Nordic cultures, spread across four countries (Norway, Sweden, Finland, and Russia), with around half the estimated 80,000 of them living in Northern Norway. They have their own language similar to Finnish and Hungarian, but sadly, it is spoken by less than half of the people. In Norway, the Sami people were once forced to speak Norwegian and reject their religion, which has played a part in the dwindling numbers. The Sami people, particularly of Norway, are intrinsically linked with the farming of reindeer, but in a way which boasts a respect for both the animal and nature as a whole that I fear is no longer associated with the word “farming.” The ways in which they treat the reindeer I will return to.

Karianne, draped in a tradition Sami cloak and bright orange fur head wear, gently introduced us to the rules for the day with the reindeer, and one thing become apparent and put me at ease: this lady loves these reindeer. Not only that, she had an enormous level of pride for the Sami people and their ways, ensuring that everything we did was as traditional possible. Karianne’s care and entrenched traditions prompted a quiet sigh of relief from me. I am an animal lover and a part of me feared any mistreatment of these glorious creatures. An animal rights purist could still claim these reindeer aren’t living as they would choose, and in a few regards they’d be correct, but you may be shocked to learn that they are free for the majority of the year. That is, the reindeer only “work” on the farm during the winter months, and the rest of the year they are left to their own devices as part of the herd in the wild, with all the freedom and risks that affords.

This is indeed a reindeer, and not — as I first suspected — an albino dwarf cow with sticks duct taped to his head.

At the beginning of every winter season, Karianne has to find out whether the animals she has loved, cared for, and worked with have survived the litany of predators: eagles, bears, wolves, lynx, and wolverine. Not to mention, the males during rutting season can cause mortal injury to one another. Despite this, some of Karianne’s reindeer have been coming back to the farm every winter for over a decade. Although they are skittish beasts, the way they react to Karianne warms the cockles of one’s heart, as they plod up to her like giant, gentle dogs. Having been introduced to the three who would be our travel companions for the day, Liz and I were shown to our respective sleigh, ready to be transported through the woods to a camp spot.

You may not the vehicles are lined with reindeer pelts. While beautiful, I would never ordinarily go near real animal fur, but the Sami people waste no part of a reindeer. The animal is fundamental to their survival, for farming, for transport, for warmth, and for food.

The blizzard had somewhat receded, and with our driver and belongings securely fastened (albeit with my camera exposed to the elements, testing both its weather-sealing and its aptitude for battery-draining temperatures), we set off through the trees. With the light snowfall lending itself to the legitimacy of the experience (admittedly robbed somewhat by the aforementioned camera), I caught myself not taking pictures at all. It was a singular moment to be savored and appreciated. Being a photographer, though, it wasn’t long before I wanted to capture the singular moment.

Brushing snow off my eyelashes, I heaved myself out of my ride and into a small camp in the woods. Karianne immediately started a fire — a welcome sight — and I got a little closer to the reindeer, grazing softly in the quietness.

My Nan used to say “it’s so cold I can feel it in my bones.” I always thought such a sensation was creative hyperbole until I was sat on a bale of hay in rural Norway, too cold to shiver. It become swiftly apparent why the Sami people used reindeer skins so readily; until recent history, it might well have been that or perish. Karianne continued to educate Liz and I on those Sami people and their history, both with and without reindeer.

Central to the Sami’s philosophy on life was a respect — and more poignantly, a responsibility — to nature. Mother Earth was deemed the source of all life, and other gods of nature controlled individual phenomenon such as the sun and thunder. Many of the beliefs are (or were, it’s hard to tell how prevalent they are today) archaic, albeit charming if that isn’t too patronizing to observe. Animals and landscapers were all considered living entities with souls, and they would aid in mankind’s struggles if prayed to and sacrificed to. Shamans and priests would use supernatural powers to communicate these desires using drums. What stuck with me primarily, however, was the idea that if you are to take something from the earth or nature, you must give something back in return, a thought process that would be invaluable if universal today.

Karianne had been presented with ceremonial Sami items, one such prized possession being a traditional knife.

After several hours of learning, chatting, stroking reindeer, and trying to lasso a skull, we swigged one last cup of hot, oaky coffee and tethered the docile beasts back to their respective sleighs. With a belly full of moss, they respectfully return to work at the gentle guidance of Karianne.

Upon arriving back at base camp, Karianne brought us in to the enclosure where the off-duty reindeer roamed and grazed, an eclectic bunch with varying personalities and temperaments. From soft-treading, inquisitive creatures, readily available to have their faces stroked by strangers, or preferably to them I’m sure, Karianne, through to the battle-hardened, veterans of war who stood their distance (and their ground).

Boss: an elder of the herd, blind in one eye, but not any less of a warrior, and a majestic one at that.

As the day drew to a close, Liz and I thanked Karianne for her hospitality and wisdom, and departed to fitting skies of clouds cracking to reveal icy blue — a memorable trip to a place largely untouched by tourism and industry, with an experience I’ll happily carry with me for some time. For anyone visiting Norway who might be interested in taking the time to travel to Rørosrein, you can find their details by clicking here. I will as the obligatory caveat (but necessary these days) say that this is not a sponsored post; I was not paid by anyone at Rørosrein, and it was not in exchange for a discount or any freebies. It is one of my most cherished days I have opted to photograph, and I would recommend it to all photographers, animal lovers, and nomads alike.

The otherworldly view on the drive back southwest.

I will close the article on a light note, making a pillock of myself. As we were getting ready to venture back from the camp to the farm by sleigh, Karianne noticed I was somewhere between cold and catatonic, despite my layers and skiing clothes. After deeming the aforementioned orange Sami hat to be “too hot,” she fetched it for me to wear. It was indeed staggeringly warm, though Karianne looked far better in it than I did.

When worn by me, it repels both the cold and any potential suitors.

The Best Thing You Can Do to Improve Your Landscape Photography