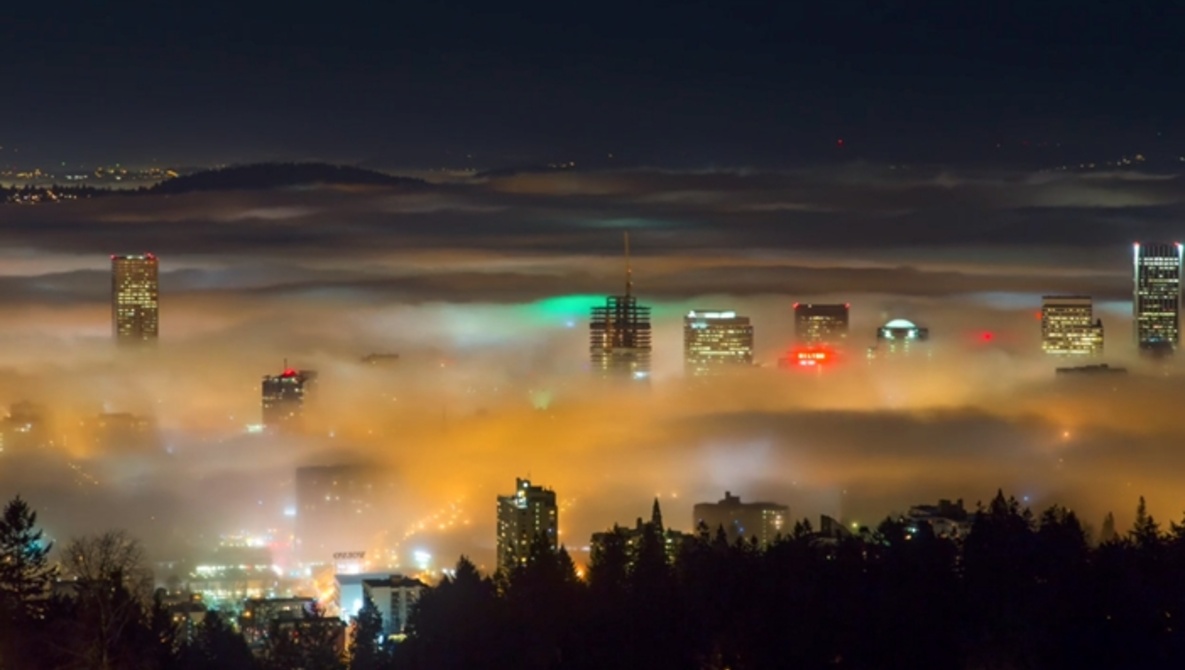 As photographers and filmmakers, sometimes the most incredible scenes we capture happen when we least expect them. Such was the case for 19-year-old talent Andrew Studer, when he ventured to downtown Portland, Oregon to shoot a sunset. The beautiful fog that engulfed the city after the sun went down convinced Studer to stick around, and the resulting time-lapse film is an incredible display of weather in the Northwest’s second most populated city.

Captured over a 24 hour period, Studer hustled from one location to the next, knowing that his time with the thick rolling blankets of fog was limited. Studer tells me about the frantic day:

Actually, the most stressful part of this film was making sure I had enough coverage. Having three cameras was both a blessing and a curse. It was nice being able to film so many various aspects of the city, but it became very hectic. Swapping memory cards, batteries, tripod plates, and lenses in-between the three cameras while making sure to keep the photos creative, compelling, and complete was a huge challenge. In the end, I wish I shot more but It was a great learning experience and without the constant struggle of managing so many shots, I probably wouldn’t have been able to stay awake almost the entire night.

As for equipment, the real-time video was captured using a Sony a7S. This camera was especially great to have since I could film in complete darkness and still get useable footage. For the time-lapse scenes, I used my Canon 6D with either a Canon 300mm f/4 or a 24-105mm f/4. Finally, for the last shot in the film, I used my Stage Zero time-lapse dolly made by Dynamic Perception to move through the trees.

While to the normal citizen, this must have been a cold, depressing night, but to us photographers, we have never seen Portland so beautiful.

Ten Things I Learned About Landscape Photography in 2018