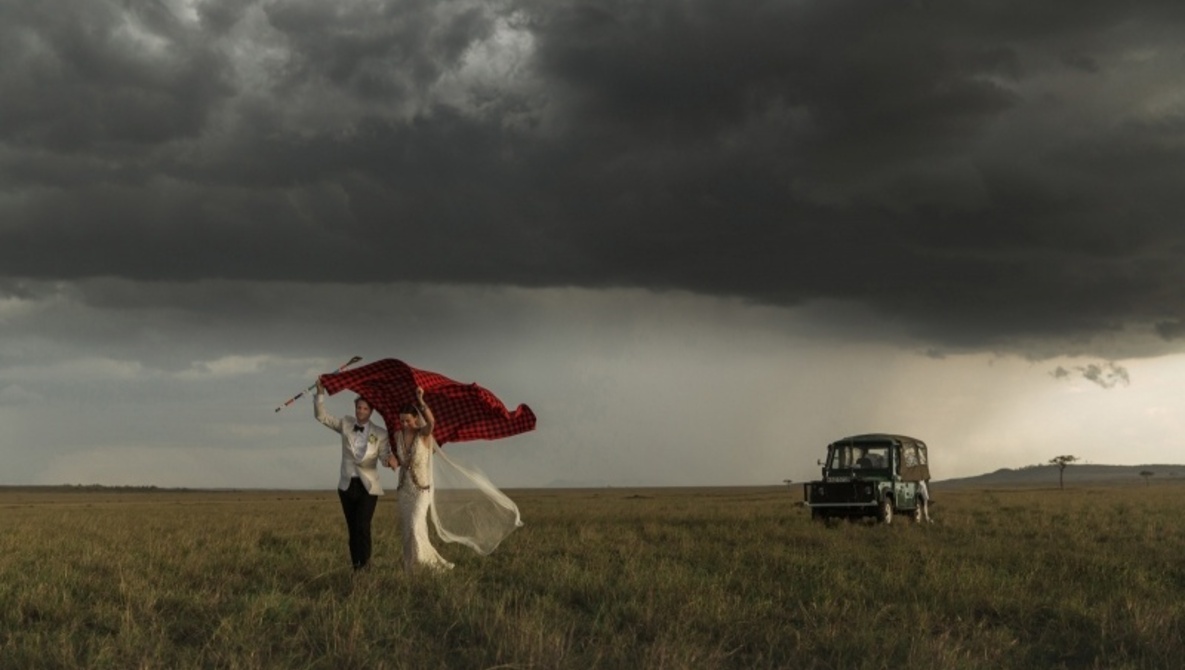 Australian wedding photographer Jonas Peterson is one of the best around, shooting extravagant weddings in exotic locations on a regular basis. A recent wedding he shot in Kenya may be the most incredible though, described by Peterson as “easily one of the most amazing experiences of my life.” I recently contacted Jonas to ask for more information about his breathtaking images from the Masai Mara, and he was kind enough to share with me his experiences on the beautiful reserve in Kenya.

“I’ve traveled the world and shot weddings pretty much everywhere, but no place blew my mind in the same way Masai Mara did” Jonas told me in a message. He had been hired to photograph the wedding of Nina Sunden, a wildlife photographer who has been following a pride of Lions in the area for years, photographing them for her upcoming book on the world’s last wild lions. Nina had become very close with the Maasai, the native people of the area, and decided to hold her wedding among the wild animals and astounding landscape of Kenya. Jonas told me that he was a bit nervous about photographing in such an astonishing  location, “…knowing how difficult it is to shoot images that represent a place, especially during the constraints of a wedding day.” However, once the day began, nothing could have gone better.

“The wedding day started at sunrise with a game drive for all the guests…” Jonas recounts, “I brought a ridiculous amount of camera gear to capture the wildlife.” They spent their morning observing wildlife and Jonas shot photos throughout the drive. Upon return, preparations for the wedding began. Nina wore traditional jewelry made and gifted to her by her friends in the Maasai community.

The last couple of years I have spent many months in the Masai Mara following one pride of lions on my project about the world’s last wild lions. During this time I have become very close friends and almost family with the Maasai who have welcomed me into their lives. Therefore and because we were planning to hold our ceremony on the land of the Maasai it was very important to us to incorporate some of the traditions of the Maasai culture into the ceremony; for example the arch built is a traditional symbol of the entrance to a boma – the typical house construction of the Maasai, and after the announcement a traditional Maasai song and dance followed according to tradition. Also, the bride of the Maasai normally wear a lot of jewelry where the necklace, called enkarewa, is especially important. When I first told my closest friend in the Maasai community about our wedding early in 2014 he came back to me with a necklace and bracelets as a special gift made for me by his family. The stick carried by Sebastian was also a gift from the local Maasai community. But even more generously my friend then offered to bring warriors from the Maasai community to the celebration. So in the end our two cultures and nature merged in the perfect moment and the best day of our lives.

While the group was getting ready, Jonas saw a great opportunity to shoot the bride’s dress.

I’m not a massive fan of shooting dress shots personally, I think the dress usually looks better with a bride IN it, than hanging from a window, but when I saw a herd of animals walk past just 80 yards or so away, I quickly grabbed the dress, kicked the tent furniture off the porch and managed to grab two quick frames at f/16 with the elephants in the background. I’m a sucker for symmetry, so I only had one shot.

Once the wedding party was ready, it was time for the reveal. On the Masai Mara wild animals roam freely, making venturing about alone is quite dangerous, so the Maasai volunteered several warriors to help guard the bride.

Once the ceremony began, the weather began to change, “…as we approached the ceremony site I could see a storm building on the horizon. The weather changes very quickly and I knew we were cutting it close. Because of the storm I managed to capture some of the most amazing ceremony shots of my career.” The rain held off until the end of the ceremony, but once they were on their way to the Jeeps, the grey sky turned black, and they still had to take portraits, “We got one minute to work with. I told Nina and Sebastian to grab a Maasai blanket and huddled under that I captured a few frames before the rain started pelting down. We drove back dodging lions, elephants, giraffes, and wildebeest everywhere.”

The entire set of photos can be viewed on Jonas Peterson’s blogpost here.

All photos courtesy of Jonas Peterson, used with permission.

Here’s What It Takes to Become a Professional Travel Photographer