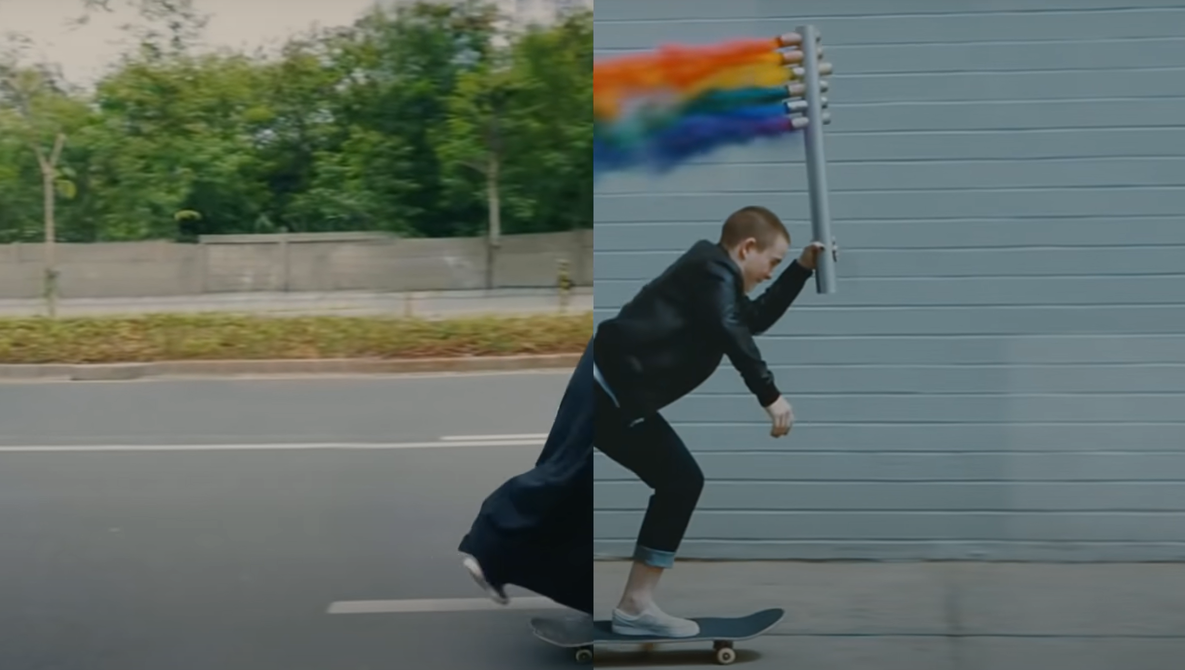 By now, you’ve probably seen the wildly impressive short film “You Can’t Stop Us” by Nike. The video has already received about 42 million views on YouTube since its release on July 30th. While the narration and source content are both as solid and empowering as we’ve come to expect from Nike’s ads, the inventive editing is the true star of the piece with its revolutionary visual concept.

“You Can’t Stop Us,” depicting expertly assembled split-screen video composites, was created by the Portland-headquartered advertising agency Wieden+Kennedy. Just after the film’s official launch, Nike shared some background information, providing impressive insight into its creation process. The statistics are staggering. Editors from Wieden+Kennedy utilized research from a collection of 4,000 sports action sequences sourced from 24 different sports. Those sequences were then whittled down to a selection of 72 clips featuring 53 athletes. Try to imagine the man-hours required to review 4,000 sequences and locate 72 clips that work together this well: it’s mind-numbing and yet absolutely worth it. This film was perfectly executed. In the era of deepfake technology, when any face can be made to perform any action while superimposed on any body, the team at Wieden+Kennedy created visual wizardry from the authentic.

Though the average person may not know of Wieden+Kennedy, they have worked behind the scenes to create some of the most memorable advertising you’ve encountered. They’ve been the team behind Nike’s campaigns for years; in fact, even the tagline “Just Do It” is credited to founding Wieden+Kennedy partner, Dan Wieden.

The agency is known for its inventive, high-concept ads that utilize a high-budget, cinematic approach. Every one of their ads seems like it was created for the high expectations and intense scrutiny of Super Bowl audiences and budgets. Remember Old Spice’s highly theatrical “The Man Your Man Could Smell Like” campaign featuring Isiah Mustafa in a series of one-take Rube Goldberg-esque sequences? That was Wieden+Kennedy. That Procter & Gamble, heart-string-tugging “Thank You, Mom” ad from the 2010 Vancouver Olympics? That was Wieden+Kennedy too. Even Bud Light’s irreverent “Dilly Dilly” series of 16 ads was created by Wieden+Kennedy. They are the agency that can make you laugh, make you cry, and now, make you feel immeasurably impressed with their editing skills while also making you feel kind of inadequate about your own concepts and video editing.

When I viewed the film for the first time, I was immediately reminded of two distinct yet similar artistic endeavors. First, I was reminded of the composite work of Stephen McMennamy as seen in his fabulous Instagram account @combophoto. McMennamy entertains his 400,000+ followers with split-screen composites that invite viewers to think about everyday objects or activities in a new light. Check out his feed and you might see a bull with horns that terminate in bicycle handlebars or a bikini-clad woman with a plucked chicken for a torso. A water balloon falls and becomes a cracked egg on impact. Each of his posts is unique, arresting, and very well executed. The two sources always form a seamless and amusing composite. His work was the first example of utilizing two disparate objects merged with a split-screen that I had encountered executed in such an effective, consistently successful way. Interestingly enough, McMennamy’s background is also in advertising.

handlebars + longhorn Seeing as last weeks post was met with such an outpouring of love and repulsion, I thought I’d spare you guys any further human + chicken carcass interactions. So this week we get to imagine the alternative transportation potential of the Bullcycle®. And I know the handlebars need to be facing the other way, but this is just a prototype. The final will have a saddle and maybe a cup holder. Keep in mind, I haven’t had a chance to run this thing past my patent attorney, but I can’t imagine the U.S. Patent Office issuing us anything other than a greenlight for mass production to begin immediately. I see this as being kinda like those Citi bikes all over NY, but I still have some kinks on the backend that need to be sorted out. The main kink being, how to achieve a zero emissions rating. If anyone out there is well versed on eliminating cow farts, hit me up. Okay, supper time… gotta hop. Oh and I can’t guarantee that there won’t be any more human + chicken carcass combos in the future (like next week), but if there is one, I’ll do my best to make it as unsettling as humanly possible. So until then, everyone be thinking… zero farts. 🚫💨 #combophoto

chicken + legs I’m not sure what’s going on with all my chicken related #combophoto nonsense, but I’m pretty sure I got whatever that OCD chicken streak was, out of my system. No guarantees, but I can assure you there aren’t any new chicken pics in the pipeline. None suitable for this family friendly format at least. that stuff goes on my tik tok. Okay, I was supposed to start dinner about 20 minutes ago, so I’m gonna hop. Until next time…

The other indirectly related piece that came to mind was the recent quarantine-inspired creation by the band Thao & The Get Down Stay Down. Filmed entirely on Zoom using performers in their own homes, the official music video for the song “Phenom” features careful choreography where dancers perform actions like passing glasses of water from one Zoom video chat frame to another. At one point, seven different performers, each lending a portion of their body to the effort, merge to create a single human form in composite. In another sequence, dancers turn their webcams 90 degrees and move seamlessly across the frame, each performer picking up where the last left off. Faced with the barriers of creating a music video while in isolation, Thao & The Get Down Stay Down found a way to make the best of their limitations and revolutionize the capabilities of video chat. It is amazingly effective and incredibly creative.

Wieden+Kennedy, similarly faced with the task of film creation at a time when new sports footage is nearly impossible to come by, pick up those composite mantles, utilizing each of these techniques with absolute success. We watch a ball roll across the frame from one sport to another or follow along as a horse becomes a bike mid-leap across the screen.  Potential energy turns kinetic; two moments in time become linked, aligned by often unexpected visual similarities.

Other times, we see two athletes, often of different ages, sexes, ethnicities, and sports, merge as one across a centerline that more unites them than divides. The body language, the athletic form, the arcs of motion are all so staggeringly similar when distributed across that unmoving centerline, that you are drawn in, becoming invested not only in the visual excellence but the message it supports. “You Can’t Stop Us” invites us to engage. It captures our attention. It makes us believe it’s core truth: that we are the same, we are strong, and we will prevail. So impressive are the visuals that it takes repeat viewings to fully soak it all in. Every time you hit “replay,” you’ll find something that you totally missed before.

The eloquent yet simple narration, voiced beautifully by Megan Rapinoe, builds to a crescendo simultaneously with the visuals in a spectacularly crafted and emotionally charged way. Who didn’t get goosebumps when the skateboarder in a niqab transformed into a skateboarder trailing a rainbow of smoke during the line “and if we don’t fit the sport, we’ll change the sport”?

That is only one of many moments that leaves the viewer hanging on words and cinematic magic. “You Can’t Stop Us” takes inventive techniques that you’ve seen before, maybe on Instagram by @combophoto, or on YouTube by Thao & The Get Down Stay Down, or maybe somewhere else entirely, and transforms them into a whole new cinematic beast.

In the past, Wieden+Kennedy have released behind the scenes footage for their projects. Hopefully, in the coming weeks, they’ll provide a bit more background on this tremendous project and what it took to create it. For now, though, we can all agree: “You Can’t Stop Us” is thought-provoking, inspiring work at a time when we could all use a little extra inspiration. It’s successful advertising at its finest.

Fun Photography Projects to Work on During COVID-19

Does the Sony a7S III Stand a Chance Against $60,000 Hollywood Cameras?