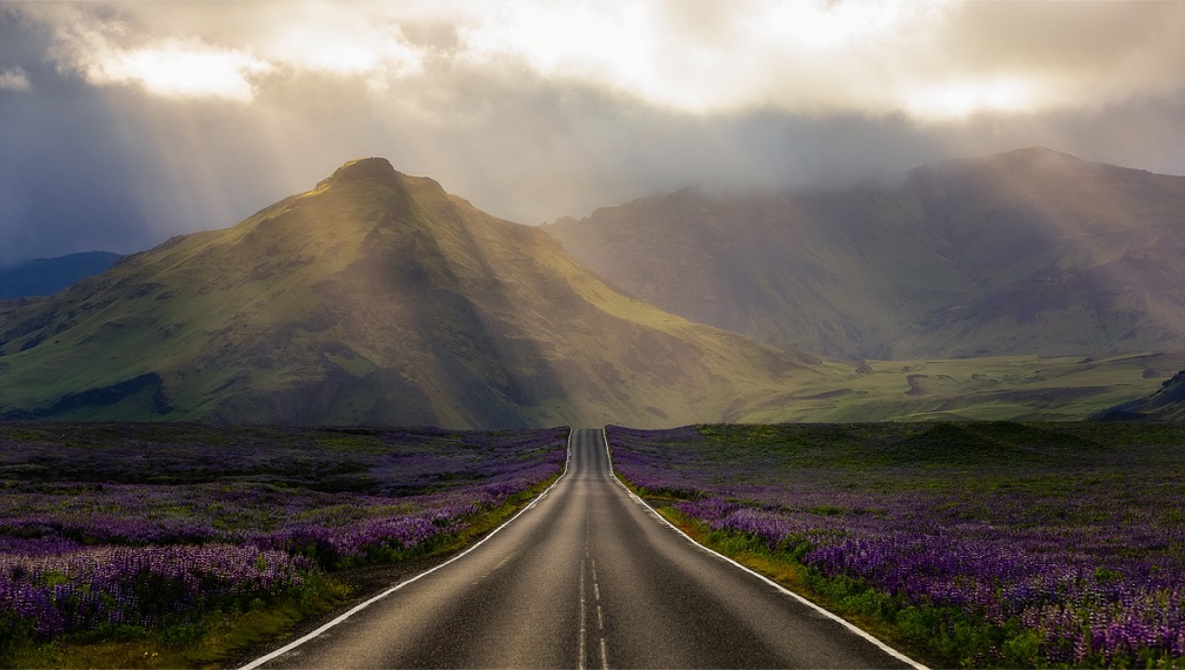 I don’t get to shoot landscapes as often as I’d like, but when I do, I try to maximize the time I have in a place to the fullest extent. Many times, that’s just waking up for sunrise while my relatives snooze their alarms on a family trip, but eventually, when I started planning my own adventures, I had a hard time figuring out where to start until I discovered an incredible tool.

Last year was the first time I took a proper trip just to shoot landscapes. What better place to do so than Iceland? At first, it was completely overwhelming trying to plan such a trip. I was going for seven days and meeting an old college friend for the entire thing. Thankfully, his agenda was “I’m just along for the ride,” which gave me the freedom to shoot whatever I desired but also meant I was on my own when it came to our plans — quite a daunting task. One of the hardest parts about planning such a trip like this was wrapping my head around where everything was and if we even had time to drive to them.

I found myself knowing exactly what places looked like but having no clue where they were geographically. Thus, I started making a list of the places I had seen or heard about and wanted to visit. One of the absolute best things I found in doing this was Google Maps. Yes I know, you probably have never heard of it. It is this wonderful service where you put addresses in and… Okay, jokes aside, it really is Google Maps! However, there’s a feature you might not even know exists called “My Maps.” I surely didn’t when I came upon it by accident.

Obviously, you can put in locations and find where they were but what happens when you have 20 different places on my list? You start to lose track of where everything is, especially considering half of the locations you can’t even pronounce! This is where My Maps completely changed the game. All you need is a Gmail account (it won’t work with non-Gmail accounts) and to go to the My Maps website. You’ll come to a screen that looks similar to this one:

It won’t have any maps on it just yet, but that’s about to change! Let’s open up the Iceland trip that I created. You can create whatever map you’d like, of course. 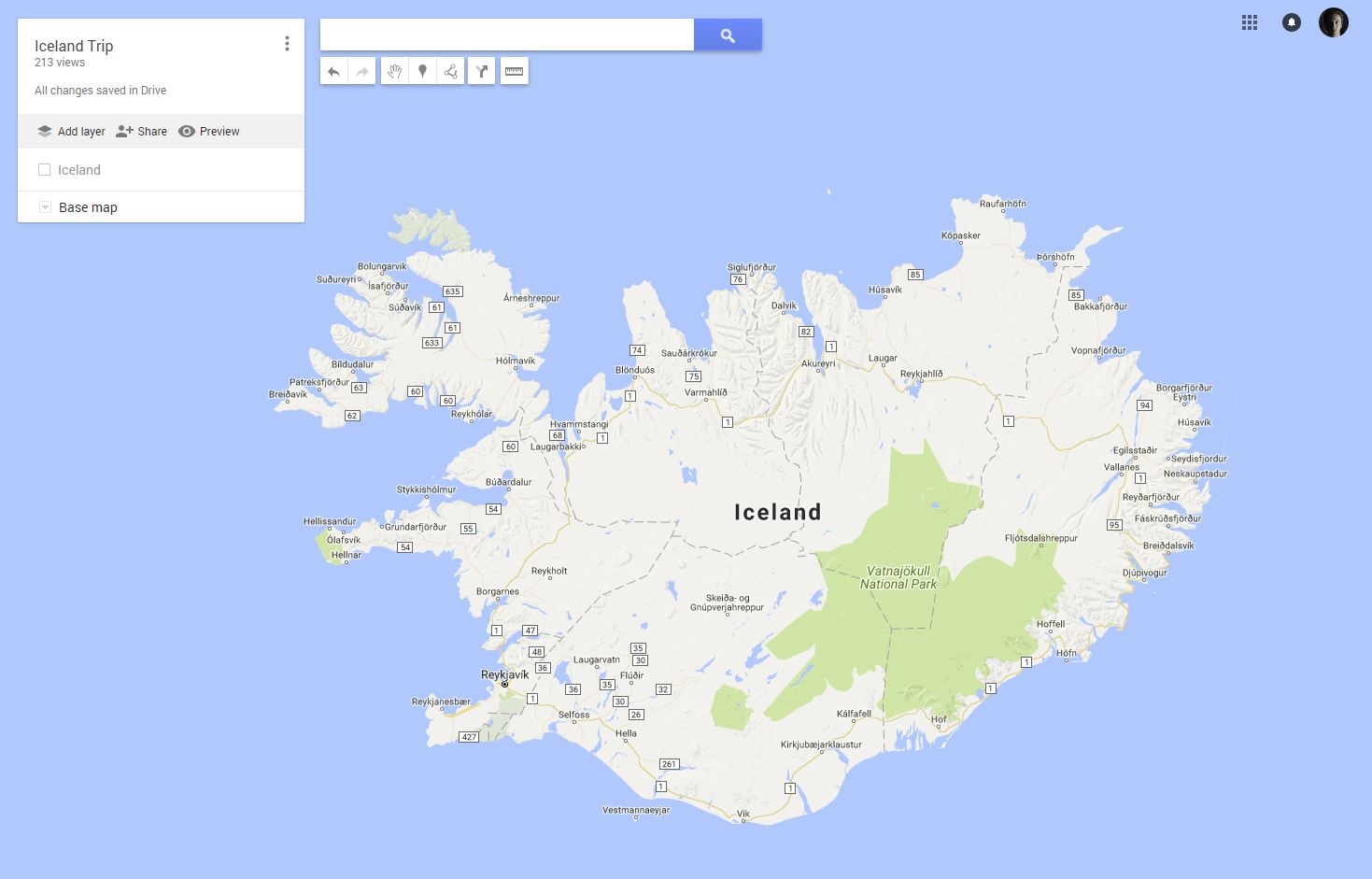 So, this is where the fun begins. Take that list you have of places you want to visit and start pinning them to the map. Over the next month or so, anytime I came across a spot from Iceland on social media, I would add it to my list. Eventually, I had to narrow it down a little bit, because some places were simply more interesting than others and my time was limited, but you can add as many or as few locations as you’d like.This was the end result: 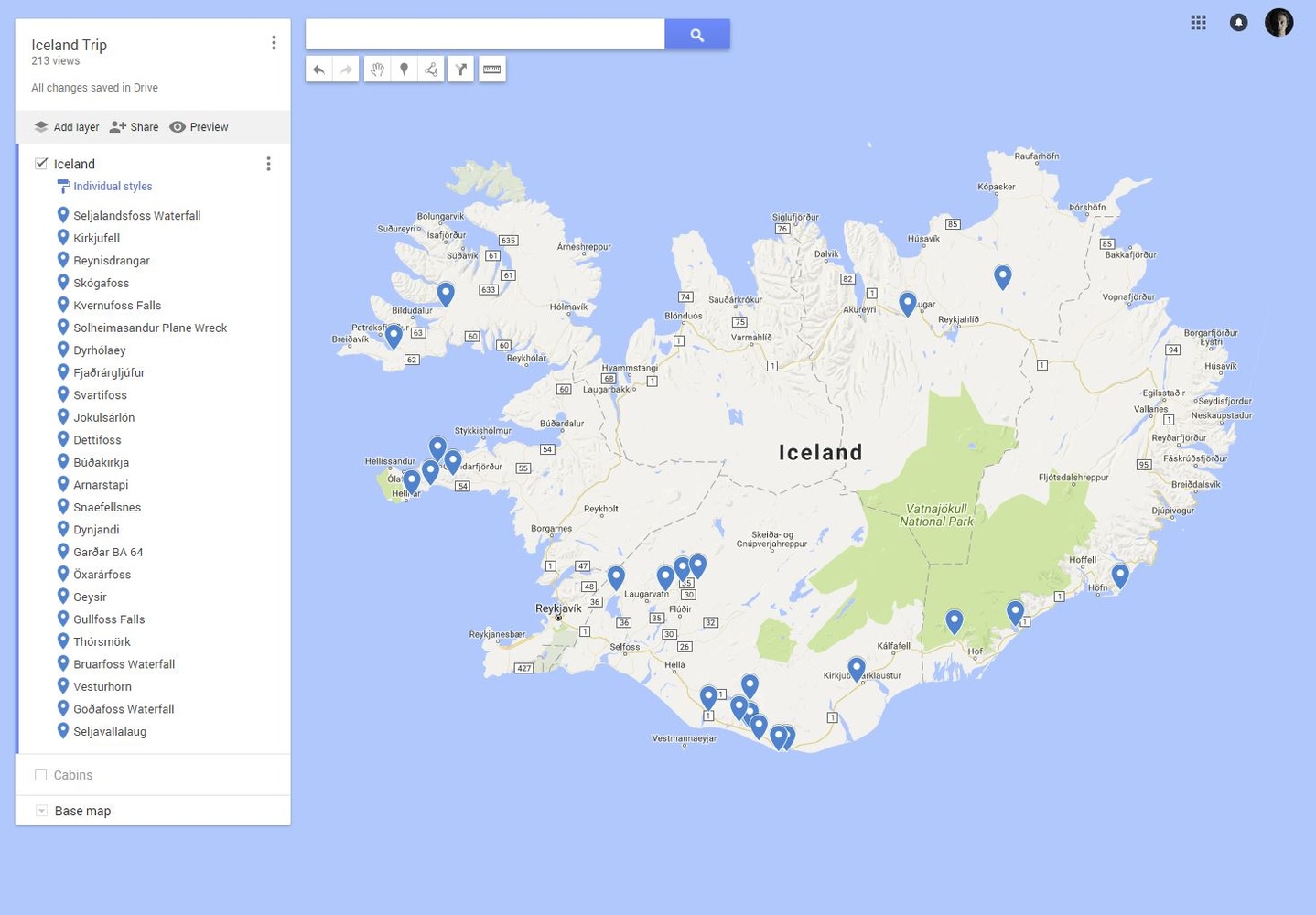 Locations I narrowed down that I wanted to shoot in Iceland

Figuring Out Where to Stay

So now that I had pinned a lot of the locations that I was interested in visiting, I at least had a much better idea where everything was located so I could figure out where my friend and I would be sleeping. This was a huge breakthrough and sigh of relief to visually see all of the places on a map rather than trying to plot them out in my head. With these points marked, I opened up AirBnB and started browsing around for places that were generally within a large area of spots to visit. Here’s a general idea of where I looked for places to stay. I broke up the trip into two sections because it was financially best to stay somewhere as long as possible, thus we stayed in the red area for three days and the blue area for four days. I’ve also included the final spots we ended up staying. 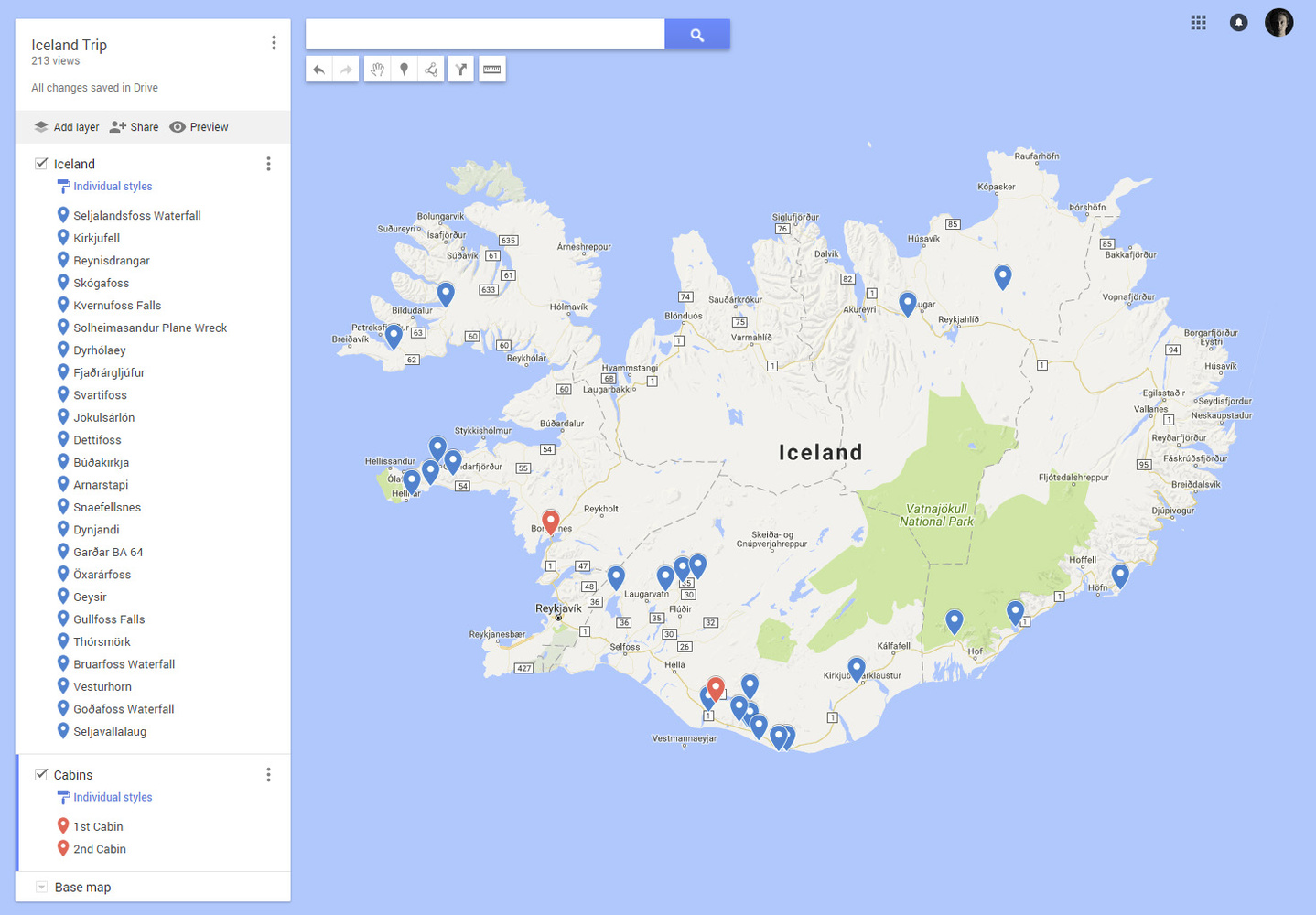 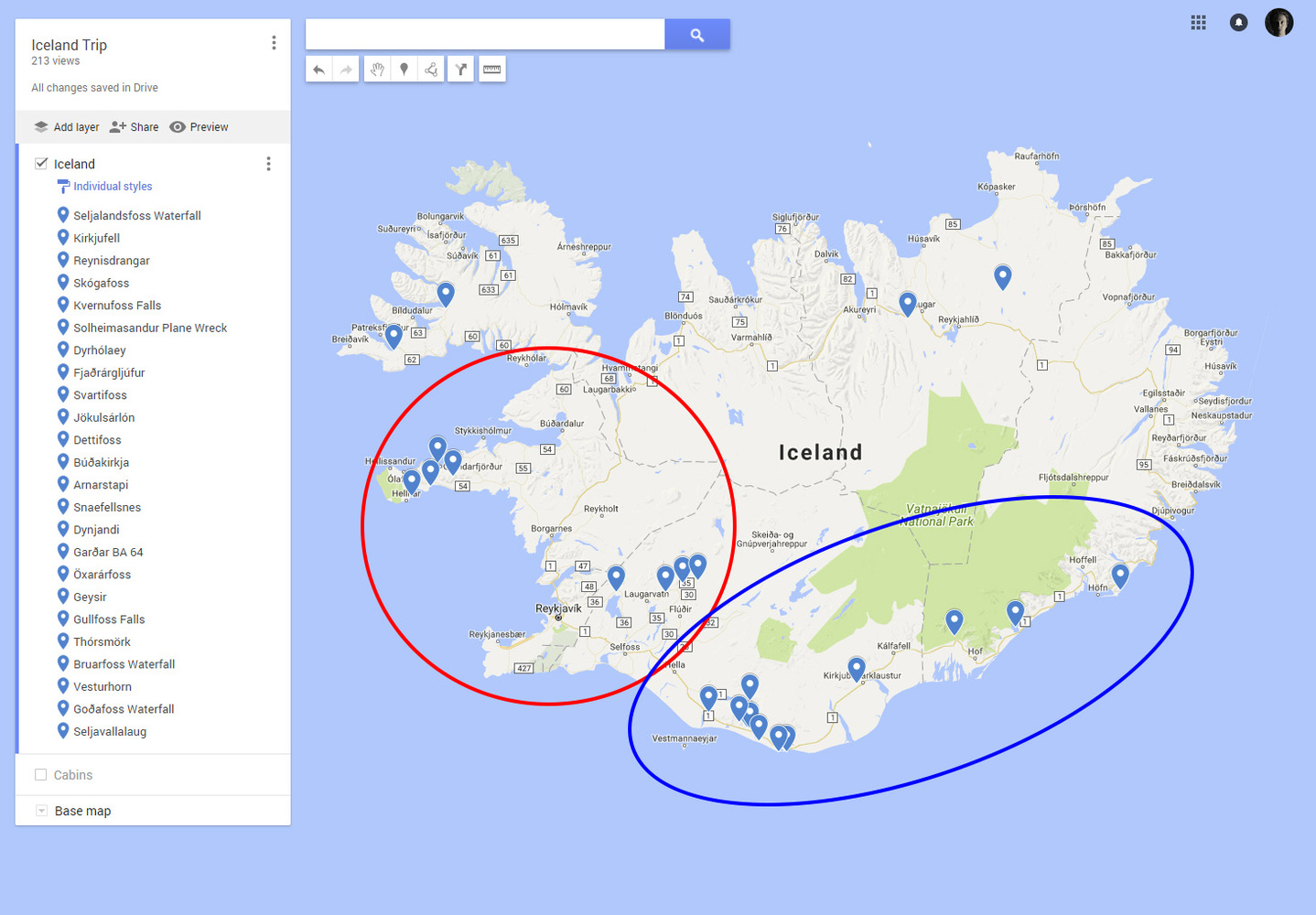 You’ll notice that I used a second layer and colorization for marking the cabins. These are wonderful features to keep things organized and easily understandable for your planning. I’m currently using the layers feature to help plan a long trip to Europe. In one layer, I have all the spots my girlfriend wants to visit, while in another layer, I have places I absolutely want to go, and in the final layer, I put places we have not made a decision on yet. It’s really helpful because you can turn these layers on and off to see “ideas” clearly drawn out on a map.

The final feature that helped out tremendously was the use of photos and being able to add them to locations right from Google search. 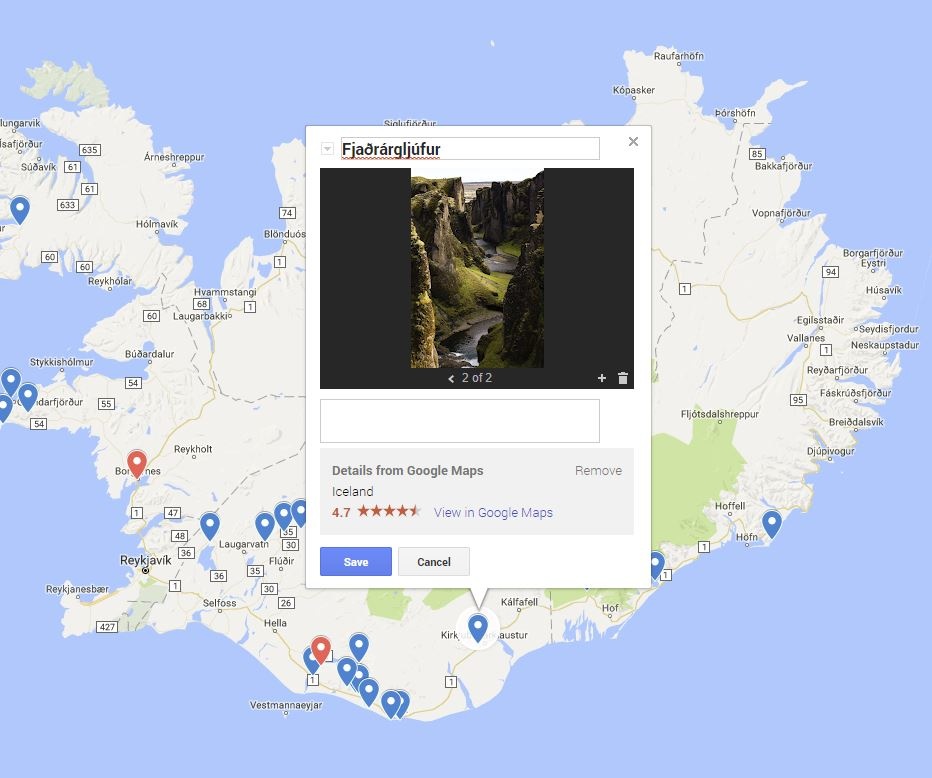 When you can’t spell or even pronounce the location, you can reference what it looks like

I could remember what iconic locations such as Godafoss and Kirkjufell looked like (thanks, “Photographing the World“). However, for places like Fjaðrárgljúfur, I didn’t have a clue! All I knew was it wasn’t a waterfall because it didn’t end in “foss.” This might not be a feature you utilize, but it really helps me when I’m planning trips for months on end or when I travel internationally. Sometimes, I see a place on social media and add it to an upcoming trip, but I don’t quite remember everything’s name (or how to spell it), only what it looks like.

Syncing With Your Phone

Lastly, you can sync this with the Google Maps app and share the map with anyone! When we arrived in Iceland, I opened up Google Maps and logged into my account on the app. After you are logged in, just open up the menu and select Your Places – Maps – [Trip name]. Boom! All my points of interest and even the photos I selected were on my phone:

I was also able to share the map I created with my friend throughout the entire planning phase and actual trip. This might be a great way to collaborate with someone or simply share a travel log of places you’ve visited around the world.

I’m hoping this helped some of you and shows you a tool you can use in planning your future trips, especially those of us that like to visually see where our travels are taking us. I distinctly remember how much this helped planning a trip to a foreign place and how easy it was when using it. I’d love to hear what you think in the comments.