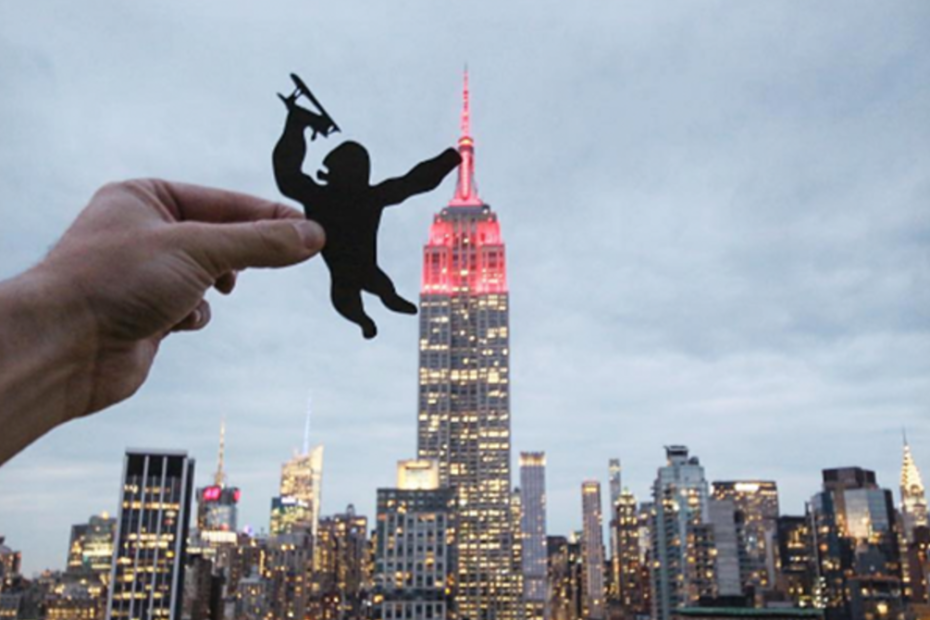 Rich McCor sprung to 175k followers on Instagram, with his creative approach to landscapes. Adding his own paper cutouts to the frame, we’re treated to a cartoon view on famous landmarks. They’re playful, well made, and definitely a creative way to travel the world.

Speaking to Rich, who goes under the name paperboyo on Instagram, he said that he started with London, and it grew from there. Before he knew it he was flying around the world creating the cutout-art for brands.

He isn’t confined to the regular shoot day that most photographer’s adhere to. In fact he says that he gets a nice playlist to listen to for the day, and gets to walk around cities for hours and hours. Sounds enjoyable! When I spoke with him he mentioned that tourists would wonder what he was doing, and he’d engage with anybody that is interested in his art.

Now he’s traveling farther afield with tourist boards, and he’s done it all in the past year. Undeniably impressive for a pet project, that grew into a full time job. When I asked Rich about his growth online and gaining recognition he seems excited about the future and what he’s achieved so far.
My favorite story from him was when he met a fan in an unlikely place. He got chatting to a lady who worked in the hotel he was staying in, and eventually he told her what he did for a living.

“She told me that she’s following a travel blogger who she recommends and so took out her phone, opened Instagram and showed me the account. I blushed, it was my account. When I told her, she blushed. That was a really cool moment to know that someone the other side of the world was enjoying the photos.”

Putting aside tech specs and post production obligations, Rich seems to have narrowed in on a wonderfully creative project. It is a testament to engaging with your audience, and he’s certainly cut out for it.

When Denos Vourderis proposed to his girlfriend in front of the Wonder Wheel, he promised her that if she said yes; he would buy her the Wheel. She said yes (why wouldn’t she? He was basically offering her the world’s largest wedding ring)! That was in 1948 and over the decades Vourderis worked on keeping that promise. He ran bars, hot dog stands and children’s rides, working tirelessly to save enough cash. Then one day in 1983, the Wheel’s owner decided to retire and offered the wheel to Vourderis. He immediately bought it. But the ride didn’t come with any sort of instruction manual- all that was passed on was a piece of paper, torn from a cigarette packet, with a few scribbled notes including the words “good luck”. Having spent years in awe of the wheel and its mechanics, Denos quickly sussed out how to operate it and looked after the Wheel right up until he passed in 1994. The moral of the story is don’t be crazy and offer your girlfriend a great big wheel- you’ll spend your life regretting making such a ridiculous promise. Nah, I’m joking; this may be one of my favourite stories I’ve come across in NYC and what’s even sweeter is that Vourderis’ two sons have continued to look after this landmark since their father’s death #ConeyIsland #Brooklyn #Coney #WonderWheel #Themepark #NewYork #NYC #Skyline #SeeYourCity #NYCGo @NYCGo @NYC #InstagramNYC @NewYorkCity #NYCInstantly #nycphotographer #nycblogger #Paper #Paperart #Silhouette @newyork_instagram @newyork #thecreatorsclass #illgrammers #createcommune #artofvisuals #visualsoflife #architectureporn #newyorker #USA #ArchitectureLovers #PaperArt #Bike #Motorbike

1 thought on “Photographer Reshapes Landmarks into Cartoons with Paper Cutouts”

previousSony “A7S III” Finally On The Way! But What Should We Expect?
nextAn Even Faster Way to Remove Harsh Shadows Using Photoshop