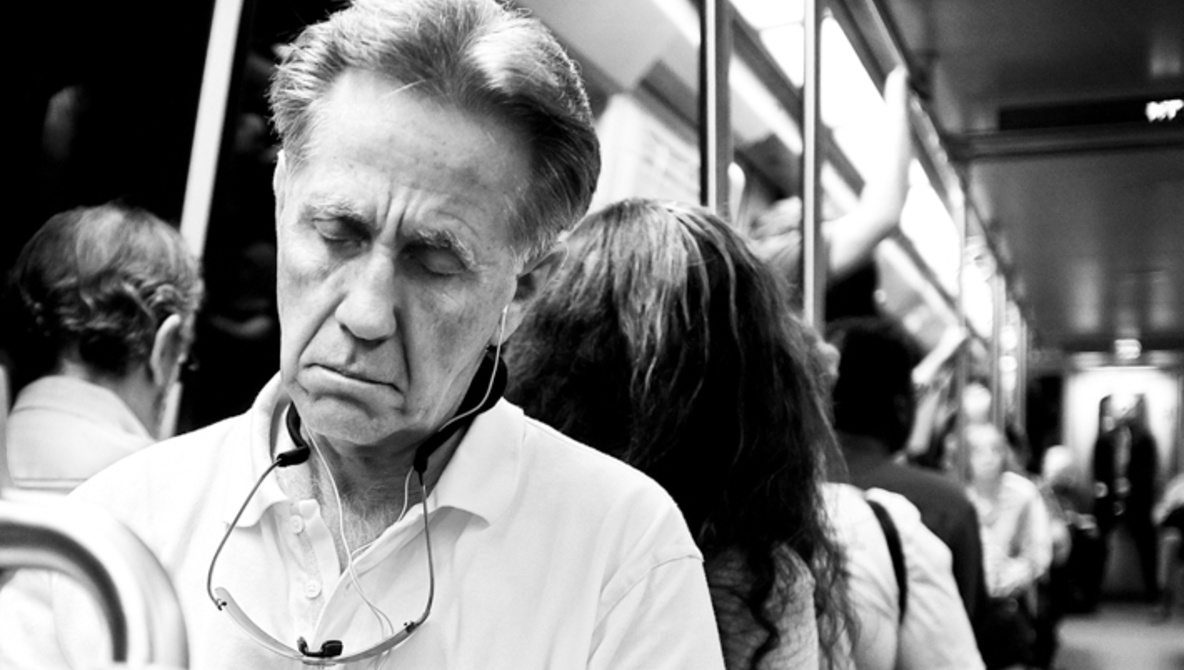 People create photo series for a number of different reasons. Sometimes you come up with an idea and pursue it while others just fall into your lap unexpectedly. For portrait photographer Willis Bretz the Washington D.C. metrorail system is where his series was brought to life or rather awakened from other commuters’ slumber. We sit down and talk about his series entitled, ‘Sleep in Transit’.

FS:  Hi, Willis. Tell us a little bit about yourself…

WB: I’m an editorial and commercial photographer based in the Washington D.C. area. After working the same office job for five years I made the decision to leave and do what I’m passionate about. I’ve shot a fair amount of glamour in the past, but my main focus has been portrait work for the past few years. I’m a Canon guy, but I have a special place in my heart for my Fujifilm X100.  I love playing and watching soccer (or football as my UK mates call it). I’m a huge Mumford & Sons fan. I love heading to the mountains for a weekend full of good food and camp fires. My girlfriend and I are the proud owners of our little yorkie Fritz.  He’s our little man.

FS: Tell us a little bit about the project ‘Sleep in Transit’. How did you came up with the idea, and when was the first time you shot someone sleeping on the metrorail?

WB: At the time, my daily commute was a 45 minute metro ride to and from where I worked in Washington D.C. Like most people, I would listen to music or bury my face into the newspaper or a book. There was one evening on my commute home when I was trying to solve the daily Sudoku puzzle. In my frustration over the puzzle, I looked up and there was this woman sleeping in the most awkward position while sitting on the train. I definitely chuckled a little inside as I’m sure everyone else within viewing distance did. I don’t know why, but I felt I needed to photograph her with my iPhone so I could share the laugh with my girlfriend.

The next day, I decided to be a bit more observant than normal and didn’t read the paper during my commute. Instead, I decided to pay more attention to my fellow passengers.  I assumed that I would see a handful of people sleeping during my commute, and I certainly did.  However, I was not expecting to see just how comfortable people would actually allow themselves to get. When I’d spot a passenger sleeping, I’d discretely snap a photo of them with my iPhone. After I photographed around 15 sleeping passengers, I realized that I had inadvertently started a photo project, and that I should probably begin using a camera that would produce better photographs than my iPhone 3GS.  The end result is “Sleep in Transit“.  It includes 86 photographs of D.C. Metro passengers sleeping as they sit and stand on the train.  I chose the final number as it represents the 86 metro stations that made up the rail system at the time of the project. 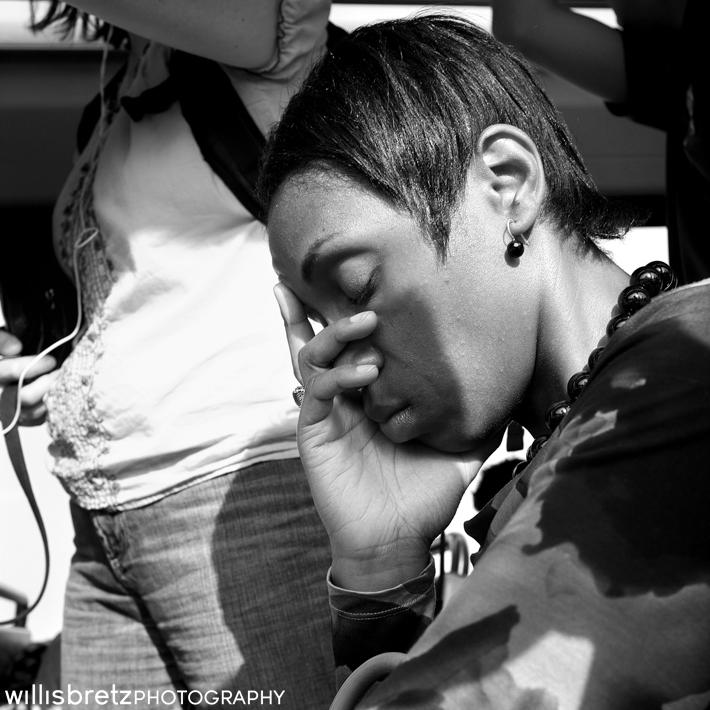 FS: What emotion were you trying to convey in these photographs? Was there a particular story that you wanted to tell your audience?

WB: During the project, I actually found myself asking that same question.  The initial reaction to the photographs seems to be laughter, but once you get past that and really look at the photographs, you may start to see something else. You get a sense of who these people are by what they’re wearing or holding in their laps. As you gather the details, you start to see something that isn’t laughable, but possibly respectful. They may be someone who’s shift just ended only for them to go work another job to help provide for their family.  All of the photographs have a common theme, but they each have a different story to be discovered. 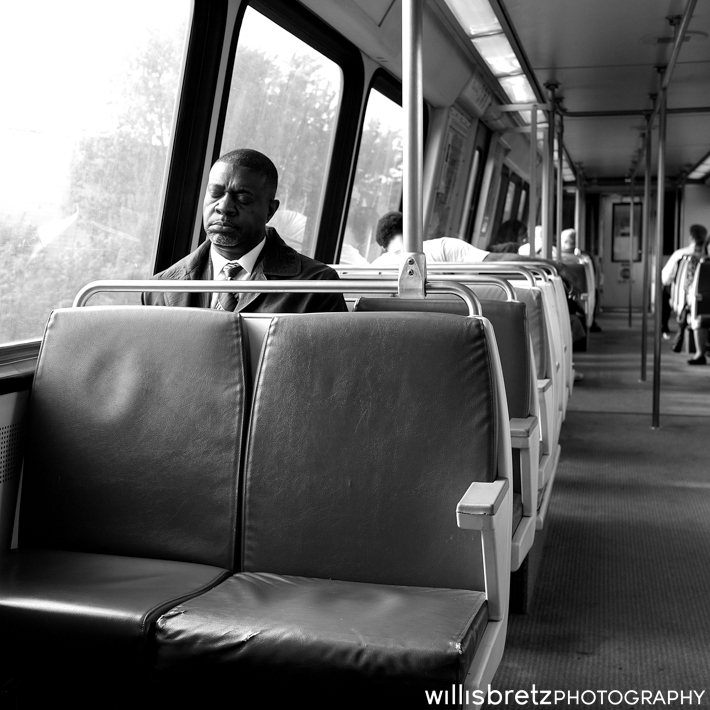 FS: Can you go ahead and tell us what equipment you used while creating the series?

WB: Other than the initial photos taken with my iPhone, I used my Fujifilm X100 throughout the entire project. I don’t know of a camera that would have been more suitable for shooting a project like this. Even though it has a prime lens that is not interchangeable, its focal length was perfect. Its 23mm lens comes out to about 35mm with the camera’s crop factor. This made it ideal for shooting across the aisle or even if I was photographing the person sitting right next to me. Also, the X100 is small. This made it easy to act as if I wasn’t taking a picture when in fact I really was. Its small size also made it easy to shoot from the hip with while it hung on my shoulder or around my neck. But most importantly for this project, the X100 is extremely quiet. Adding a filter on the lens makes it even more quiet. 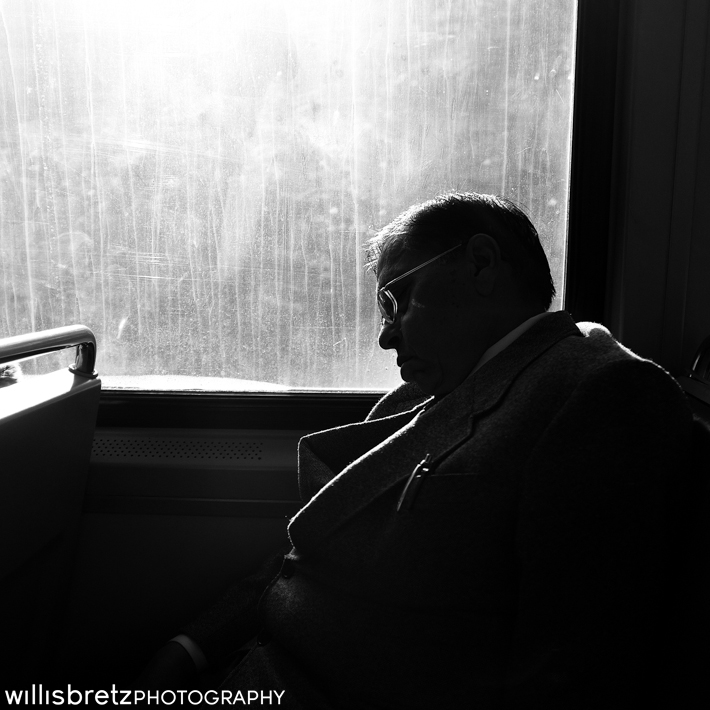 FS: Can you tell us a little bit about the processing done to the photographs?

WB: When I shoot all of my professional jobs, I always shoot in RAW. However, for some reason, I only like to shoot JPGs with my X100. When I’d get home from work, I’d dump my card and go through the shots using Photo Mechanic. I did all the editing in Adobe Photoshop with adjustment layers. First, I’d create a black and white adjustment layer. The colors on those trains mixed with the horrible light is a nightmare. Plus, I felt that the lack of color would make the subject the main focus. I then would add contrast and levels adjustment layers. I like the look of a lot of contrast for this project. It gives the photographs a bit of a punch and makes them that much more intriguing. To finish, I’d enhance the photographs a bit with the Smart Sharpen filter to bring out details and the texture of the train. That’s pretty much how I edited the entire project. I wanted to keep it simple and manageable. 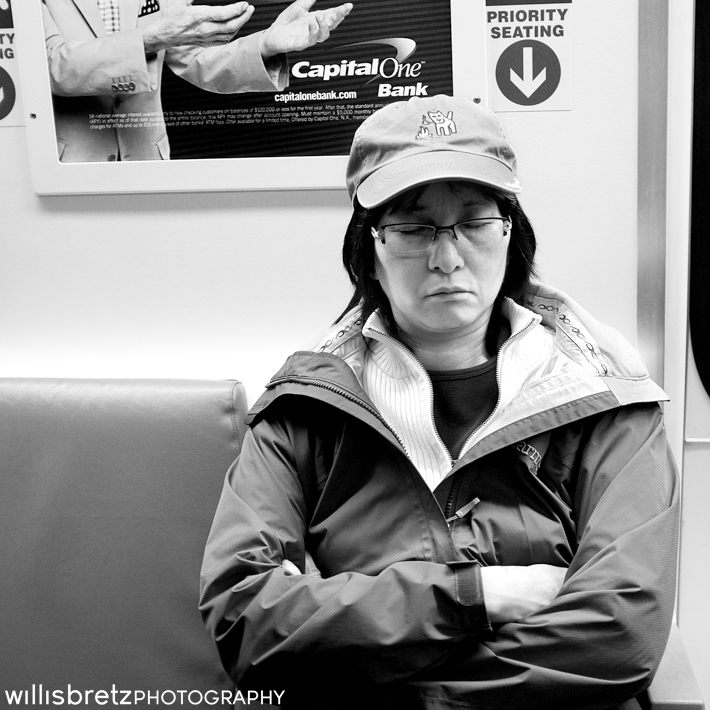 FS: How has this series affected your everyday life and/or your photography?

WB: If anything, Sleep in Transit has taught me to be more observant.  If you go through life living the same routine, chances are that you’re missing out on something, and that something could be right in front of you.  Today we’re all about our phones.  Whether we’re texting, Facebooking, Tweeting, or whatever, they’re in front of us for a good portion of our day and act like blindfolds.  Like I did with my Sudoku puzzle, it’s great to put them down occasionally to see life and the world in front of us.  You never know what you’ll see!

Like in life, the project has made me more observant when it comes to photography.  While shooting Sleep in Transit, I was hunting for the photographs and always looking out for the best possible shot.  The same is true when I’m shooting an assignment.  When given instructions by an AD or PE on how they’d like an assignment photographed, I’m always sure to fulfill their requests.  However, I’m always keeping an eye out while shooting for better options that they may not have known about. 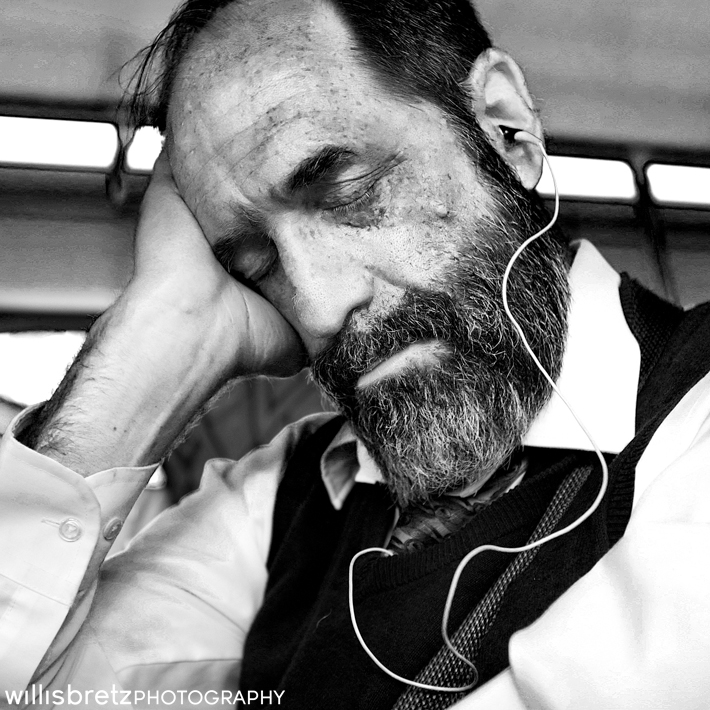 FS: How is the series special to you, personally?

WB: Sleep in Transit was my first large photo series I’ve completed.  I’ve done other smaller projects, but nothing close to this size.  I knew it would take a while to complete, and at times, I thought I would never finish it.  I kept it going and finally finished it after eight months.  Completing something after that amount of time is an incredible feeling of accomplishment.  I was thrilled it was finished, but even more so about the work as a whole.

Also, there is one funny story that I enjoy sharing.  The close-up of the older gentleman wearing headphones is perhaps my favorite of the entire series.  The crazy thing is how it actually happened.  I noticed him sleeping in the seat across the aisle from me and took several photos of him.  When I got off the train, I looked through them all.  One after another was blurry since I was shooting without looking through the viewfinder.  I was so upset that I had missed the shot.  The very next day, I was sitting in the seat and guess who gets on the train and sits right next to me.  Within minutes, he was fast asleep.  I had to of taken around 50 photos of him.  I wasn’t going to miss that chance a second time!  And one more fun fact about this project.  I always get asked if anyone ever caught me photographing them as they slept on the train.  Not one. 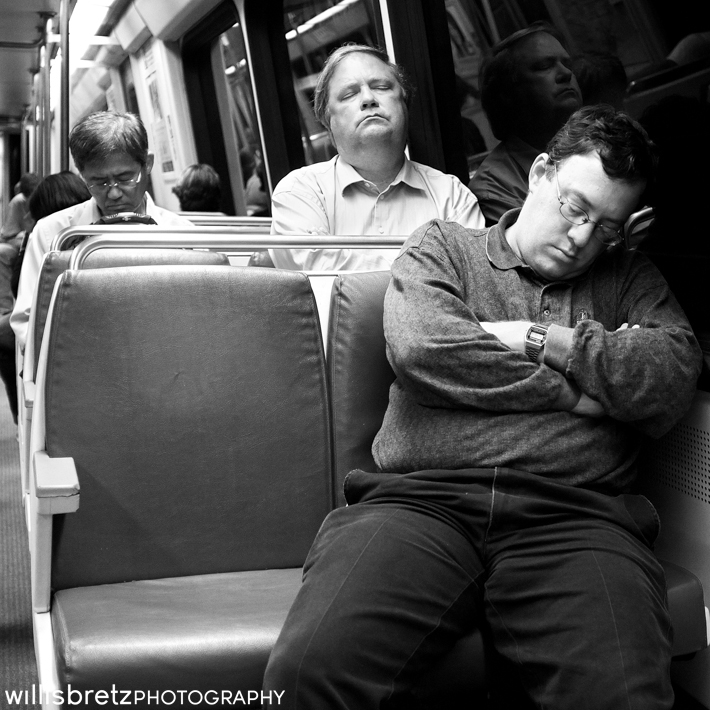 I would like to thank Willis for taking the time to sit with us and discuss his series. If you want to see more of Willis’s work you can find him on the sites below. If you have a project that you would like to see featured on Fstoppers.com let us know. You can email me at rebecca@fstoppers.com

‘Seasons of Norway’: A Next-Level Time-lapse

How I Shot the Holi Festival in India