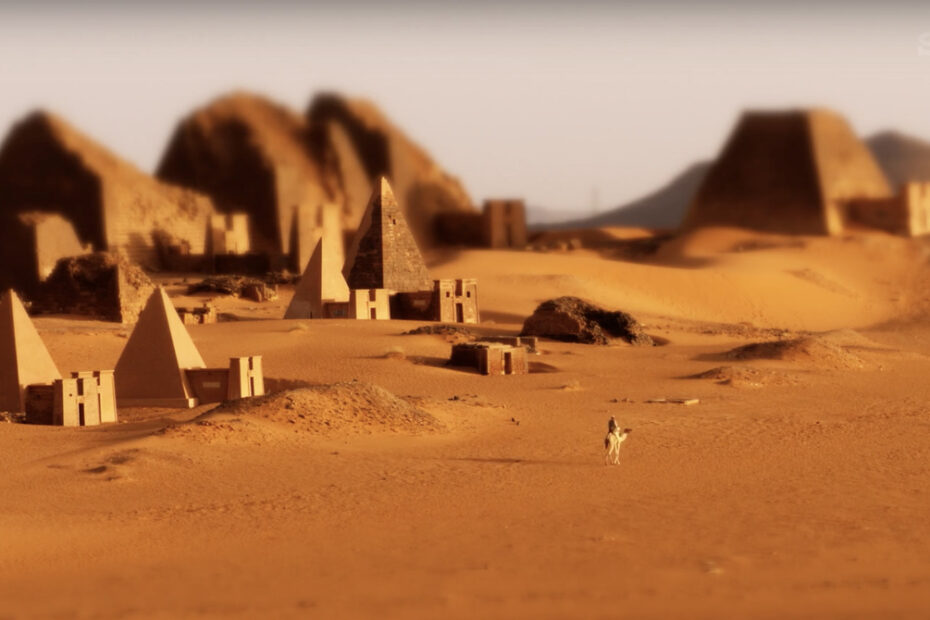 It’s easy enough to get lost in the rabbit hole of YouTube travel videos, but it’s rarer to come across a video unlike anything you’ve seen before. That’s what Cinematographer Joerg Daiber managed to create with his short film, “Sudan Surprise.”

It’s not just the gorgeous deserts, incredible pyramids, sparkling seas, and bustling cities that capture the viewers’ attention in this video. Daiber masterfully blends several techniques and genres of cinematography to captivate the viewer. The combination of tilt-shift lenses, time-lapse, and aerial cinematography is incredibly striking, particularly with his selection of music. The whimsical score and tilt-shift photography create an almost toy-like appearance, as the people, animals, and vehicles moving through the Sudanese landscape look almost like stop-motion action figures.

The tilt-shift aerial perspective makes cars in the bustling city of Khartoum look more like toys.

The 5-minute film takes viewers from the pyramids of Meroe and Karima, through the Sudanese deserts to the lighthouse of Sanganeb. It also includes underwater scenes in Suakin and breathtaking views in Kassala. Perhaps the most fun are the bustling city scenes in Port Sudan and Khartoum.

“Surprising Sudan” is the latest entry in Daiber’s series of films, titled “Little Big World,” which includes nearly 80 videos exploring locations around the world, including Boston, New Orleans, Ardennes, Luxembourg, Shanghai, Prague, Palestine, Monaco, and many more. “Surprising Sudan” is also the longest film in the series, so viewers can easily binge watch several entries even if they don’t have a lot of time available.

Have you ever been to Sudan or one of the other locations explored in the Little Big World series? How well did Daiber capture it based on your experience? Drop a comment below.

Video and images used with permission of Joerg Daiber.

previousHow to Take Amazing Landscape Photos When You Live in a “Boring” Landscape
nextWhat Shot Is Your Photography White Whale?