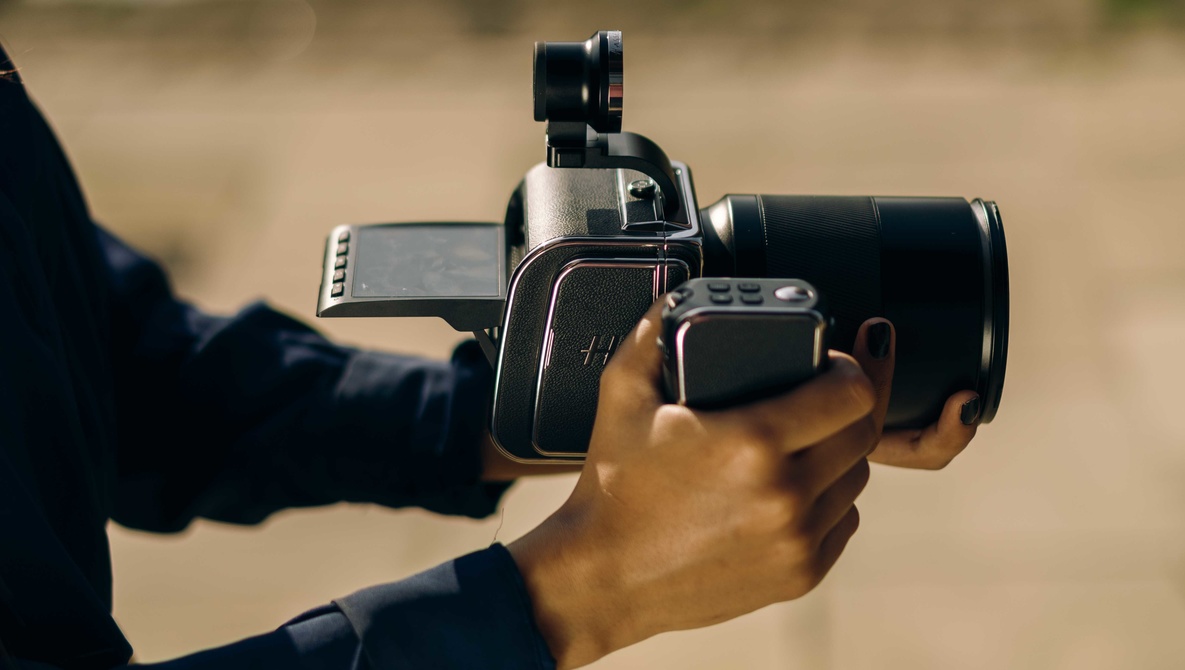 The last few years have been difficult for camera manufacturers. The silver lining to this is the fact that manufacturers have been really pushing the boundaries and producing incredible cameras systems and lenses. Although Fujifilm has done amazing things for medium format, Hasselblad truly has something incredible with its latest system.

I’ve had the pleasure of reviewing pretty much every Hasselblad camera that is currently on the market. I had a few complaints about the H6D system, and I really enjoyed shooting with the X1D II, but not so much the original.

The 907X camera is comprised of the CFV II 50c medium format back and the 907X camera body. Together, this system is described simply as the 907X 50c. The lens mount and sensor in this camera is the same as the X1D, meaning it will produce identical results. The biggest difference between both systems is that the CFV II allows for greater flexibility and potential. The XCD system from Hasselblad has opened up a world of possibilities, and it’s now slowly being realized due to the 907X camera system.

The interface and design of this camera are what stand out the most. It’s the most unique camera system that I have shot with, and it’s also one of the things I love about it. The camera itself is tiny, especially when compared to other medium format cameras. Even when compared to the Fujifilm GFX 50R, the 907x is smaller and lighter.

The build quality and the feel of this camera are beyond any other camera I have ever shot with. It is by far the most luxuriously well-built camera on the market today; nothing else comes close. The only downside is the fact that this camera system uses a smaller and lower-resolution screen on the back compared to the X1D II. Considering the 907X is a more expensive camera, this is a little annoying.

The blocky design means that you hold it similarly to how you would an older 500 series camera. The screen can be tilted out, allowing you to shoot similar to how you would with a waist-level viewfinder. The camera doesn’t have a viewfinder, so you’re required to use the screen to shoot instead. This is fine in most conditions, except when you’re shooting outside in the bright sun. The screen isn’t terrible in bright conditions, but a viewfinder would obviously be better.

Aside from the need to be hunched over to look at the screen, this camera is actually pretty comfortable to shoot with.

The most immediate issue with the design of the camera is that it’s rather uncomfortable to shoot in portrait mode. Shooting in landscape mode is perfectly fine; however, due to the location of the shutter button and the fact that the screen only tilts in one direction, shooting in portrait mode is rather awkward.

Aside from the front crown dial, there aren’t any other dials you can use to control the settings. For this reason, most of the functions are managed via the touchscreen. Fortunately, Hasselblad has the best menu system on the market, and the touchscreen is excellent. No other camera has a touchscreen and menu systems that are quite as good as Hasselblad.

The row of buttons beneath the screen are useful on occasion, but due to how good the touchscreen was, I only occasionally used them. The door on the side of the camera body houses the battery and dual SD card slots. This is a great design, because it grants easy access to the battery and storage cards, even when it’s mounted on a tripod.

The biggest problem with this camera is the fact that there is no hot shoe available. This means that if you want to sync flash, it is a little awkward, although still very possible. A rubber flab that sits beneath the row of buttons contains all of the ports that are required to sync flash. When shooting with the 907X, a 3.5mm to sync port cable is required to connect to a trigger. The 3.5mm side goes into the “Out” port in the camera, and the sync port connects to the trigger.

The problem is that the camera doesn’t have a cold shoe mount either, meaning that there isn’t anywhere convenient you can put your trigger. Overall, this camera is clearly designed over practicality; however, the design and build quality are so good that all of these negative points simply go by the wayside.

You can purchase an add-on control grip for the camera, which increases the overall size and weight but also makes the 907X a far more practical system. The build quality of the grip is identical to the camera making them work and blend seamlessly. Once attached, it doesn’t feel like an add-on at all. The most immediately useful feature the grip offers is the fact that you can shoot in portrait mode comfortably. As mentioned above, without the grip, it’s pretty awkward shooting in portrait mode with this camera.

The shutter buttons and several other buttons are located on of top the grip and provide easy access to many controls. The best addition on the grip is the joystick, which is extremely useful, especially for those that don’t like using touchscreens.

The only problem is that the shutter button is directly on top of the grip, making it a little uncomfortable to shoot with. Ideally, the shutter button would have been angled off the top a little; however, this is not a major issue. Finally, the grip offers two control dials on the front and back that can be used to control exposure settings.

Hasselblad also offers an optical viewfinder that sits on top of the camera, where the logo is found. This optical viewfinder is beautiful to look through and makes a huge difference in how you shoot with the camera. Personally, I think it makes the camera look a little quirky, almost like seeing a person wearing a monocle, and I love the way it looks with the viewfinder attached.

The viewfinder has a fixed field of view, and markings help outline the crop depending on the lens you’re shooting with. Unfortunately, the viewfinder is only compatible with the XCD 21mm, XCD 30mm, and the two XCD 45mm lenses. The OVF won’t work correctly with any other XCD lens currently available.

Because I was shooting with the XCD 80mm f/1.9 lens, I ended up using the OVF mount as a makeshift cold shoe for the flash trigger. You can remove the optical section and then attach the trigger to it, which was extremely helpful for us while out shooting with the camera.

In terms of actual performance, this camera is identical to the X1D II. This is both in terms of image quality and autofocus. In regards to performance based on usability, I’d say the X1D II is a little more refined in comparison. I found the 907X to be a little glitchy when it came to the touchscreen and how responsive it was. On occasions, the touchscreen wouldn’t respond, and I’d have to resort to using the buttons or dials on the grip. This was not a huge problem; however, it was a little frustrating at times.

Aside from that, I thought this camera performed really well. Syncing flash via the cable was pretty much perfect and had no problems, all the way up to 1/2000 s.

Image quality is identical to the X1D II; however, it’s still something worth discussing. Sharpness and clarity are obviously some of the best on the market, but what truly makes Hasselblad cameras stand out are the colors. The way this camera renders color is simply stunning, and every shot looks beautiful straight out of the camera. The rich and defined tones made it really easy to edit and ensure a level of accuracy and consistency across the board.

To test the camera, we used it on an actual shoot we did for Billingham to promote their launch of a new color. This is why the color capabilities of the Hasselblad camera were crucial.

Why This Is the Best Thing for Medium Format

In the video above, we review what it’s like to shoot with the CFV II back on a 500c/m camera. In short, it’s extremely satisfying, but not without a few quirks.

What’s incredible about the CFV II is the fact that for the first time, every single Hasselblad lens that’s been produced since around the 1950s is now compatible under one system. This unification offers a huge advantage for both the company and its customers.

With one camera back, you can shoot with H-mount lenses, XCD lenses, and even Zeiss lenses from the film era. I can imagine how the 907X could pave the way for a new, more interlinked camera system from Hasselblad, and there are only a few things that need to be done to make this a reality.

Firstly, a larger 645 version of the CFV back would be incredible. This individually would make the biggest difference for many photographers that shoot with medium format film cameras. This would also be extremely useful for people that want to shoot with H-mount lenses. Without this option, there are some significant compromises due to the crop factor, and it’s not ideal. This would also be a good idea because Hasselblad seems to be focusing more on the XCD system anyway. The H-mount system hasn’t had any new developments for several years now.
Even for XCD lenses, the larger sensor could work because many of them can actually cover the larger sensor, and for any that can’t, a crop mode could be used.

The second thing that would go a long way would be the addition of a hot shoe or even a cold shoe mount. A cold shoe mount could be attached in the same way the optical viewfinder is. This will help photographers shoot more effectively with flash and make the system more viable for professionals too.

Finally, a second optical viewfinder that is optimized for the longer focal lengths would be extremely useful. The current viewfinder is great; however, it’s pretty limiting, because it’s only compatible with the wider focal lengths.

There are very few cameras that make me think “wow,” and this is definitely one of them. The potential of this camera and what it means for medium format shooters is what excites me the most. I can’t wait to see how Hasselblad capitalizes on this system to offer some of the best most interlinked cameras on the market.

As great as this camera is, I hope this is just the beginning and that Hasselblad has big dreams for the system.

What Can You Actually Do With the Cheapest Camera on Amazon?

Fujifilm Just Released Its Own Webcam Software: You Can Now Zoom in Medium Format

Critique the Community Submit Your Best Image Taken During Quarantine