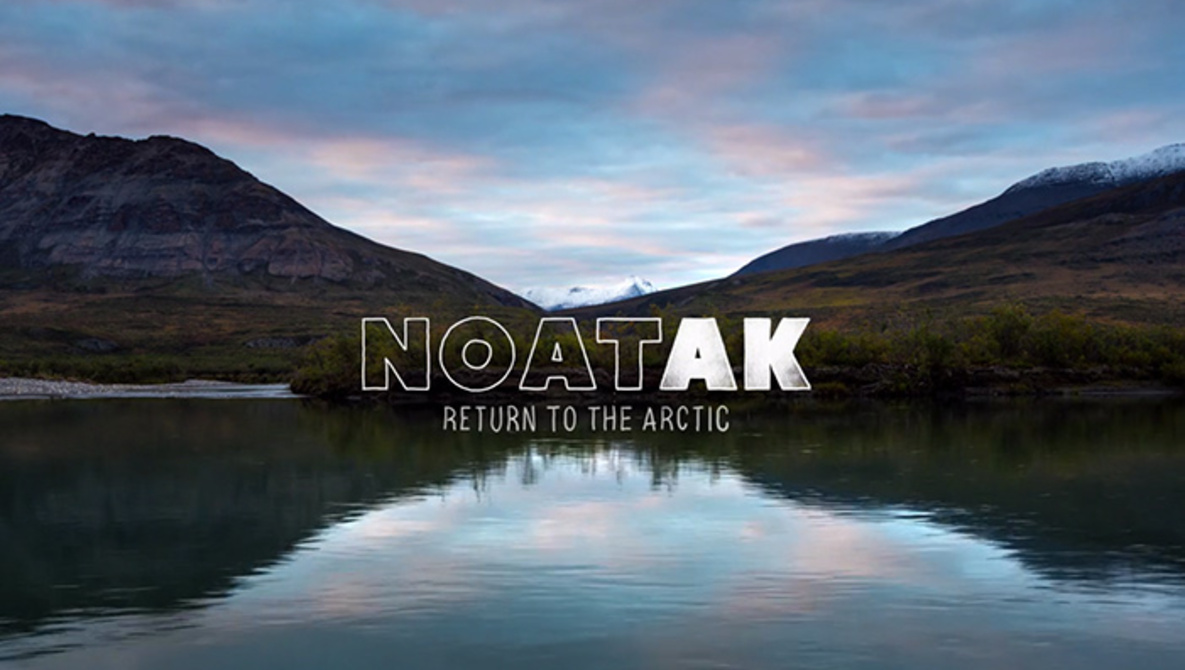 The filmmakers of “The Muir Project,” known for their first documentary, “Mile… Mile and a Half,” have just released their latest film, “Noatak: Return to the Arctic.” I interviewed Director Ric Serena who told me about the production challenges his team faced when working on a remote river deep in Alaska and why they chose to go with the Canon 1DC as their camera of choice.

Noatak reveals the backstory of two longtime friends, and their shared adventure of returning to Gates of the Arctic National Park, Alaska to paddle down the Noatak river. Accompanying Jim and Tip, the subjects of the film, were three crewmembers who would share in the production responsibilities: Ric, Jen Serena, and Jason Fitzpatrick.

The Noatak River is in Northern Alaska, and as you likely noticed, extremely remote. In order to even begin the journey down the river, a small plane had to make two trips over two days, just to drop off supplies. Ric tells me managing weight for these flights was one of the trickiest parts of the production. “We weighed everything in advance of the trip, but weather and flight conditions still forced us to constantly re-pack and prioritize what gear was with us and what would be delivered at a later day,” he said.

Being able to multipurpose gear and make the most of every ounce of weight was crucial to creating a successful film. Ric told me that at the time they planned this project, the best choice seemed to be the Canon 1DC. “We knew we wanted to shoot 4K internally, so the 1DC was the best option,” he said. “We really loved working with the 1DC. There have been a few cameras since that have similar specs, but it was really ahead of its time shooting 4K internally. Plus, shooting in Log-C was incredibly beneficial during the final color correction process.” 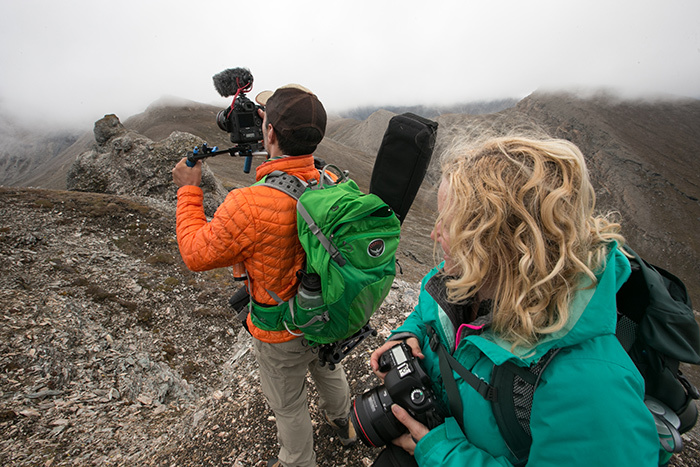 The camera has a one minute file size limit, which meant we had to stitch longer interview rolls together in post, but it didn’t take much time. Having the smaller body made it considerably easier for us to use considering we were a small crew and had to pack tight. 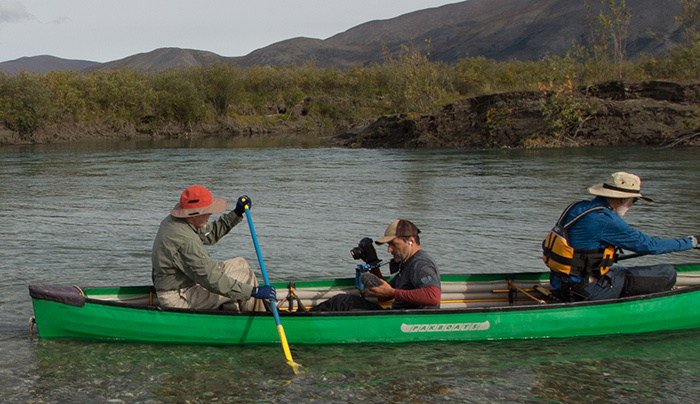 Other gear decisions included the Kessler Second Shooter, a motion control kit for their camera sliders. While it’s not the most lightweight piece of gear, the amount of production value that a piece of kit like this can add is huge. Ric shared with me that setting it up did take a little bit of time, so his crew decided to come up with a rule to maximize its use. “We did have a rule amongst ourselves that if we took the time to set it up, we’d have to knock out at least three time-lapse shots,” he said. 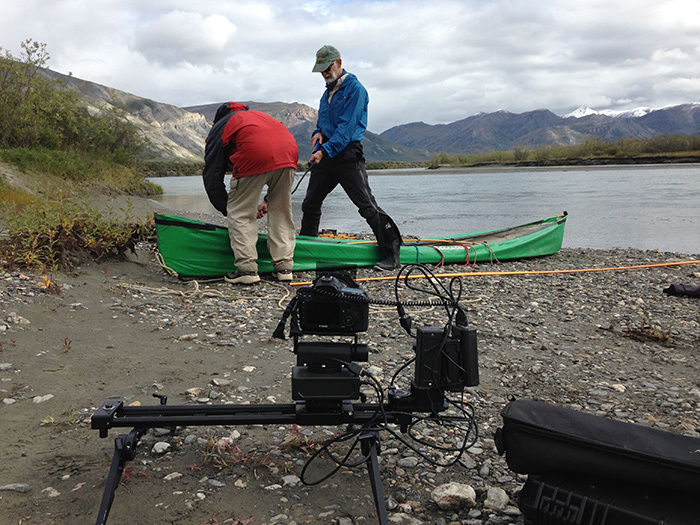 Noatak is quite a bit different from the previous film, “Mile… Mile and a Half,” that documents hiking along the John Muir trail. I asked Ric to compare the two, and tell me how producing these films were different for him. He shared with me a number of things that made their production process easier, both in shooting and post: “This was a story about Jim and Tip, and their cadence dictated the energy and pace of the film which is a much more reflective tone than the high-energy silliness of ‘Mile… Mile and a Half.’” 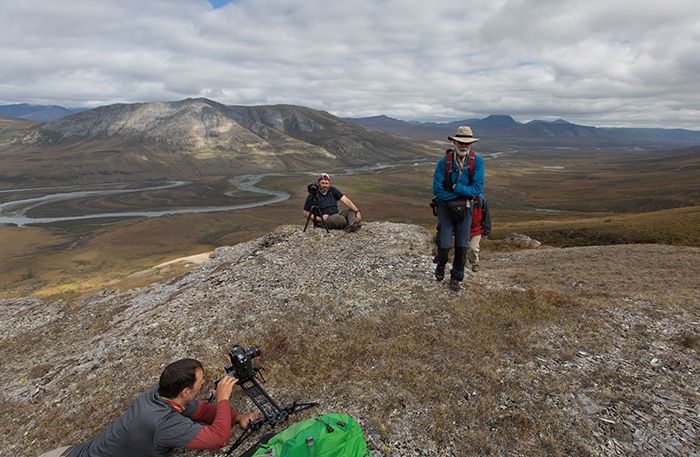 It was really nice to be using the same cameras and systems this time, as it was a bit of a hodgepodge on ‘Mile… Mile and a Half.’ It made post so much easier. Once we returned, we transcoded all the footage to ProRes4444 4K and ProRes422. We offlined with the ProRes422 and swapped out to the 4K once the cut was locked. 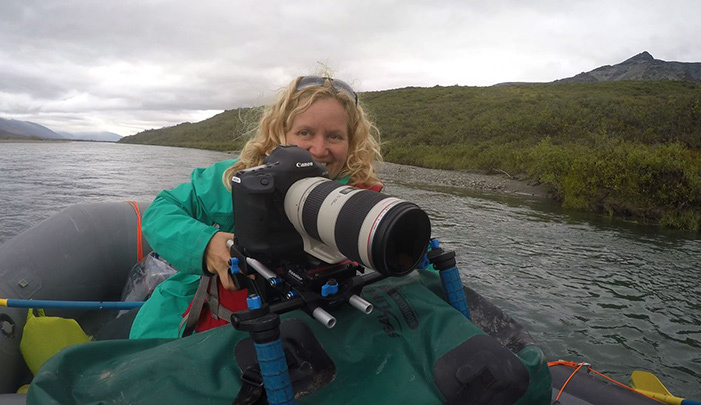 A major difference for the crew of course, was not having to carry every piece of gear, every day in a backpack, having to constantly pack and unpack. But that didn’t mean this project wasn’t without having to manage equipment in the field. “This (Noatak) was much less strenuous,” Ric said. “It had its challenges, but we didn’t have to cover 10-plus miles a day. It was a lot of work packing and getting the boats ready but we weren’t on the river everyday.”

Ric didn’t mention much about the dangers of wildlife, but it was readily noticeable in one of the images Ric shared with me. It seems as though a grizzly bear was doing a sniffing review of their Kessler Crane Pocket Jib. 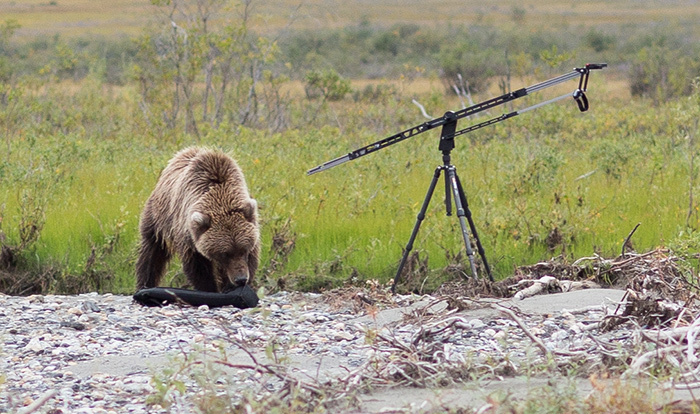 Visit The Muir Project website to learn more about their crew and films.