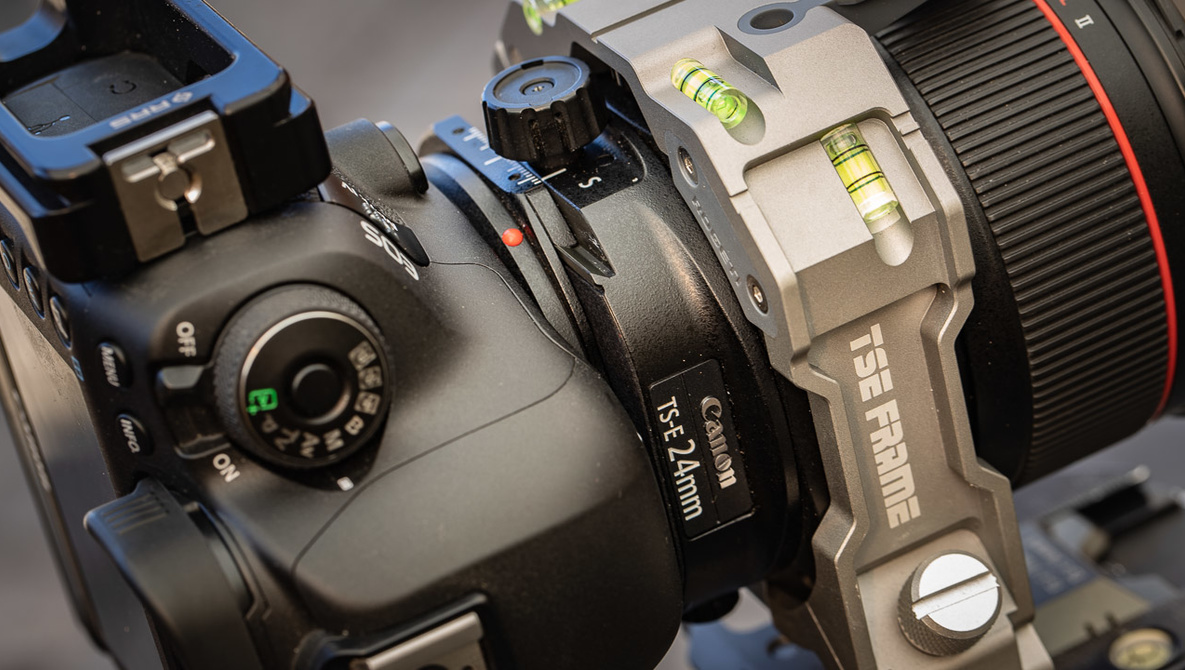 When I bought a tilt-shift lens for my landscape photography, I soon discovered how to shoot panoramas without the need for a nodal slide. But I noticed some parallax problems. The answer to this was the Rogeti TSE-frame.

I love my tilt-shift lenses. First, I bought a Canon TS-E 17mm f/4L. I was planning to use it for my landscape photography if 24mm was not wide enough. Besides extreme wide-angle purposes, I could use the tilt function to maximize the depth of field and the shift function for easy panoramas without the need for a nodal slide. Or so I thought.

Panoramas With a Tilt-Shift Lens

Parallax is the biggest issue with panoramas. It happens when the camera is not rotated in the correct way. The axis of the rotation has to be at the entrance pupil (often mistaken as the nodal point). For that, you have to use a nodal slide, which will allow you to prevent parallax. When using a tilt-shift lens, it is possible to use the shift function to change the view, allowing to shoot three photos without the need to rotate the camera.

But I soon found out it is not without parallax. By shifting the lens, you change the position of the entrance pupil from left to right or right to left, thus introducing parallax. It may not be visible when shooting objects in the distance. But when you incorporate objects in the foreground, parallax errors will occur.

Perhaps in landscapes, this could be avoided by leaving anything close to the foreground out of the frame. But for real estate photography, it definitely could be a problem. 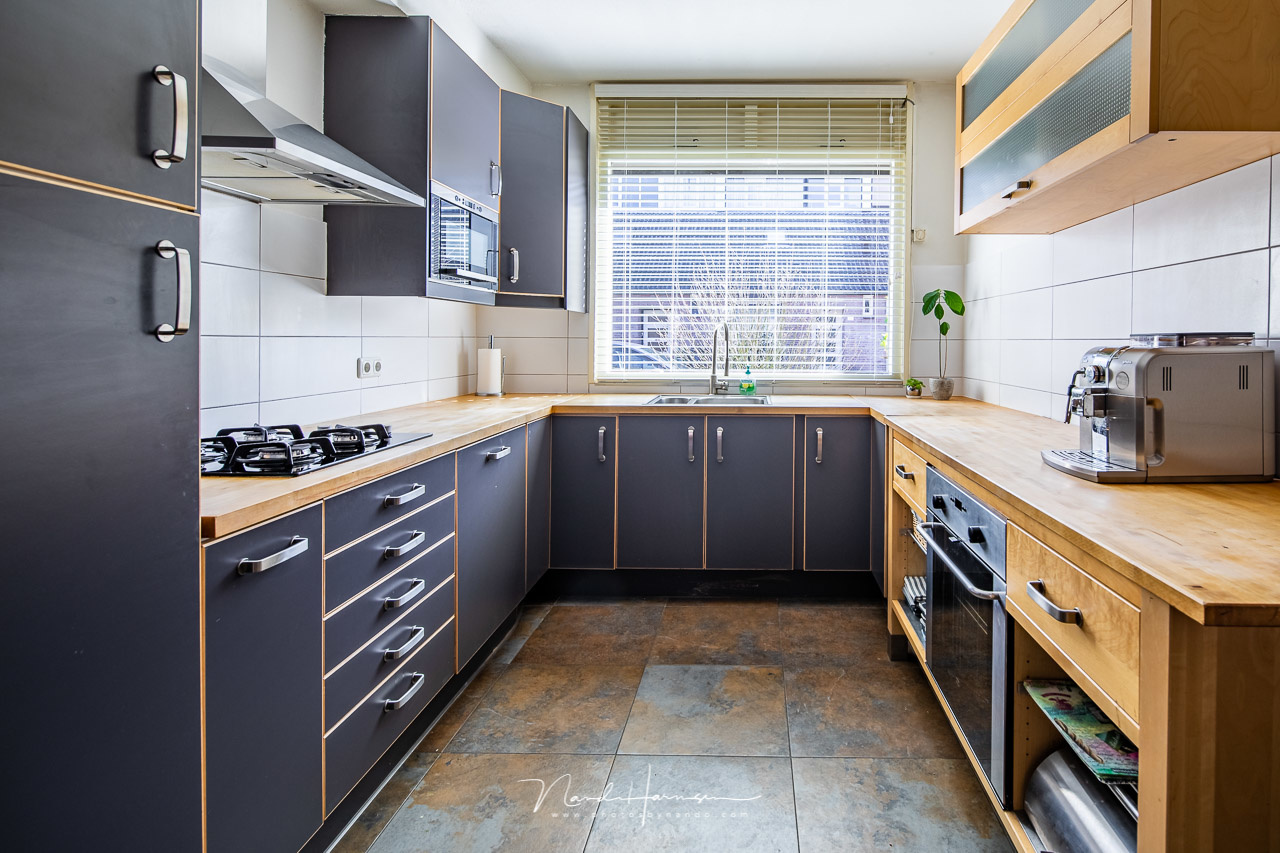 When shooting real estate, you have to be careful when using the shift function for panoramic shots. If there is a foreground element close, you can end up with parallax error. This shot is just a single one (Canon EOS 5D Mark IV + TS-E 17mm, ISO 400, f/9, bracketing with 5 shots)

Unfortunately, there is no way to correct this without the use of a nodal slide and rotating the camera at the entrance pupil or shifting the camera while keeping the entrance pupil at a fixed point. This could be done if the tilt-shift lens had a tripod collar, but Canon did not incorporate this in their tilt-shift lenses. Then, I heard about a Chinese company called Rogeti. It offered a TSE frame, which was basically a custom made tripod collar for a select number of Canon TS-E lenses. This would be the answer to the parallax problem. 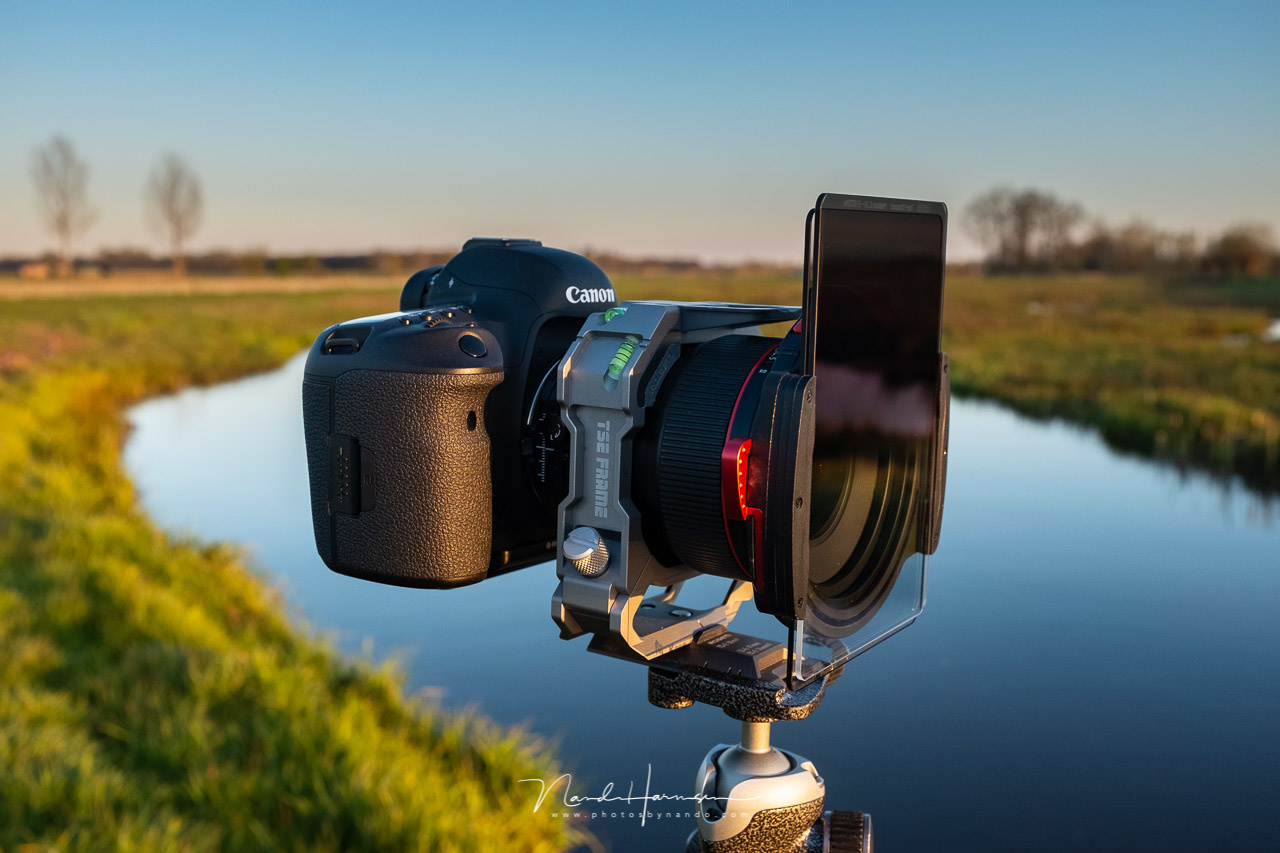 The Rogeti TSE adapter in real life, with a TS-E 24mm f/3.5L II and a set of Haida filters. I used the Rogeti for a landscape panorama of a sunset.

Rogeti produces some nice panorama products, like a geared tripod head, L-brackets, and some things for GoPro users. Their TSE frame is made from lightweight anodic oxidized aluminum, adding only 215 grams to the lens. It is not cheap, so I was in doubt for a while if I would need this frame for my photography. 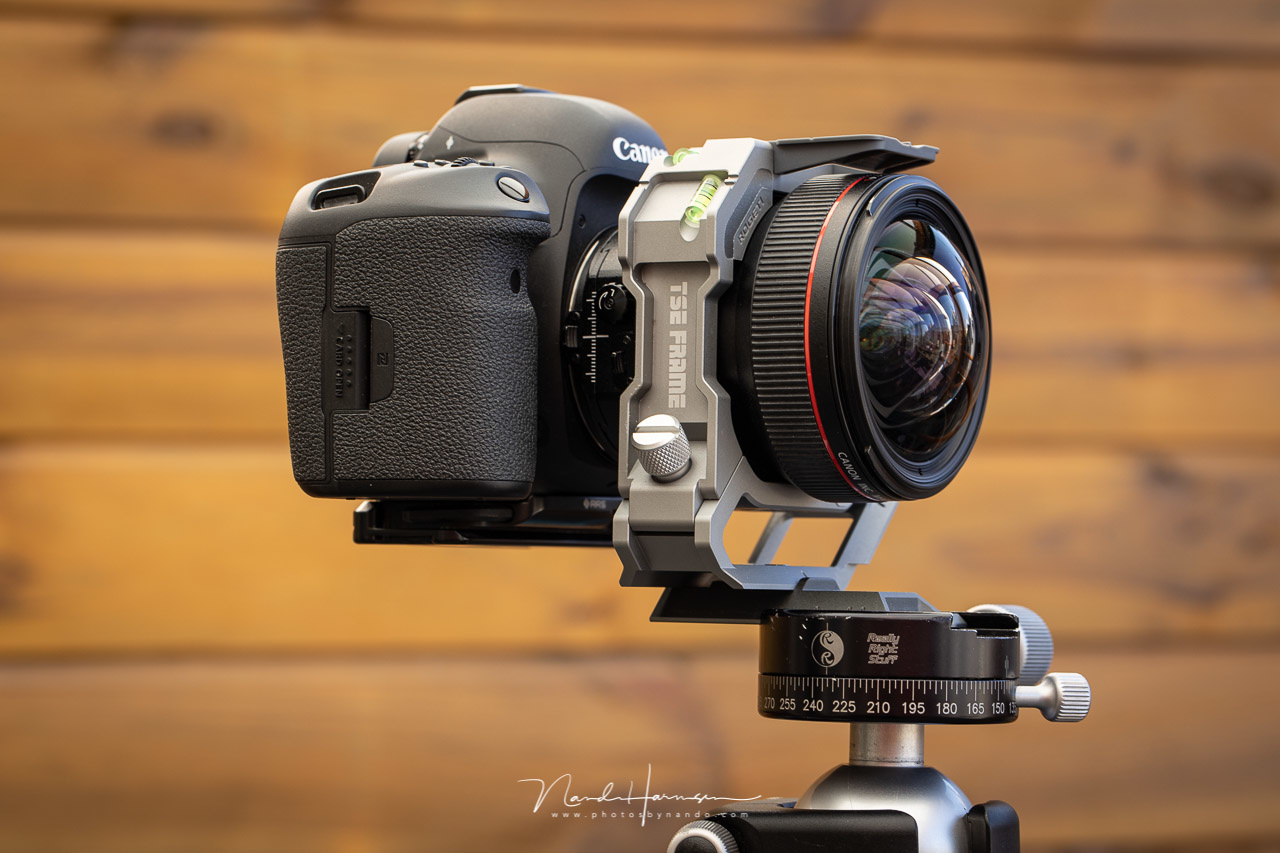 The TS-E 17mm f/4L lens fitted in a Rogeti TSE adapter and mounted with the provided nodal slide. It looks impressive, but does it work as it should? 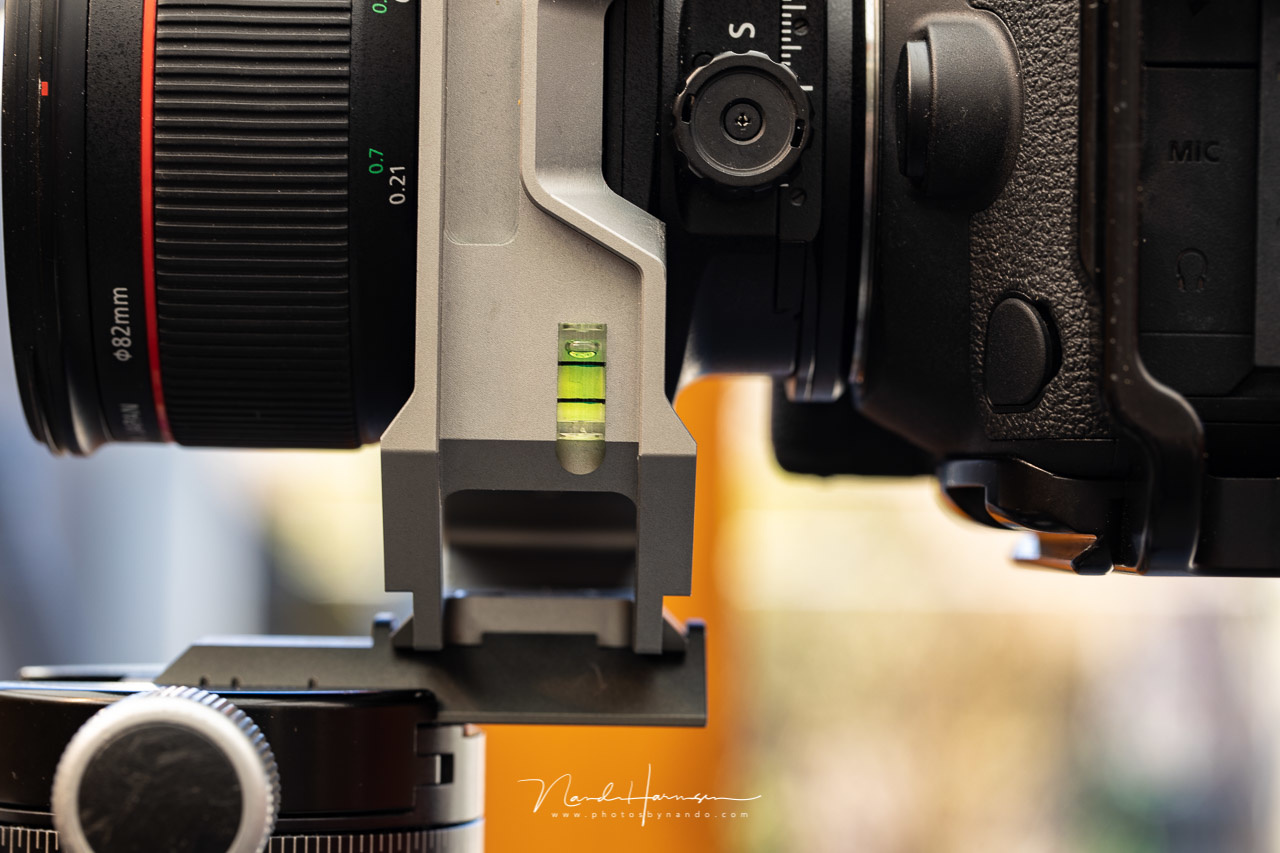 This is how a TS-E 24mm f/3.5L II looks like when fitted into the Rogeti TSE adapter. You can see the shift knob is easy to reach if your fingers are not too thick. 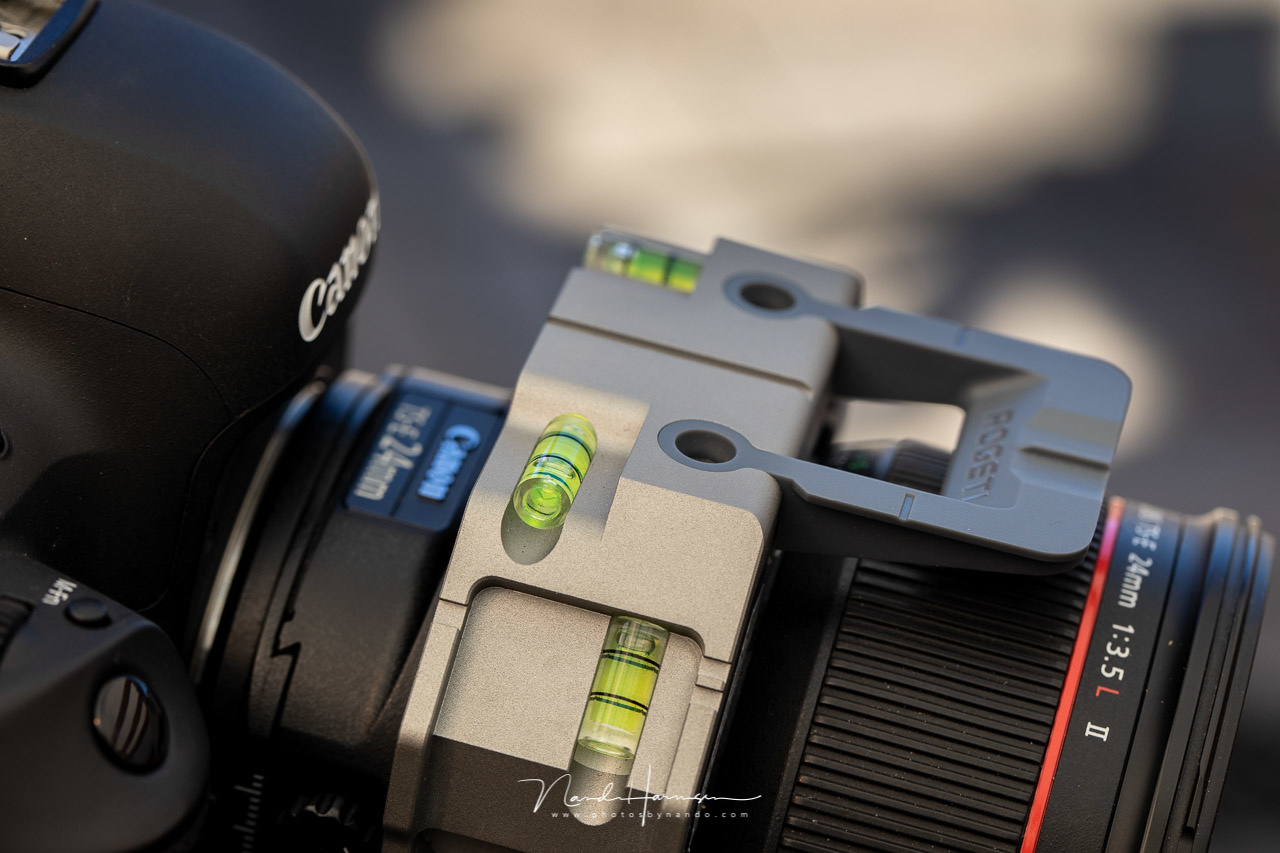 The Rogeti TSE adapter had a lot of spirit bubbles for easily levelling the camera at any angle.

The TSE Frame III (the third version) is very well built. It fits both the TS-E 24mm f/3.5L II and the TS-E 17mm f/4L. A few rubber mounts hold the lens without leaving scratches, and there are four spirit bubbles that match the different angles in which the frame can be used.

Rogeti provides a nodal slide with the TSE frame and a bracket that can carry a smartphone or gray card to block sunlight. This is very handy when using the TS-E 17mm f/4L. 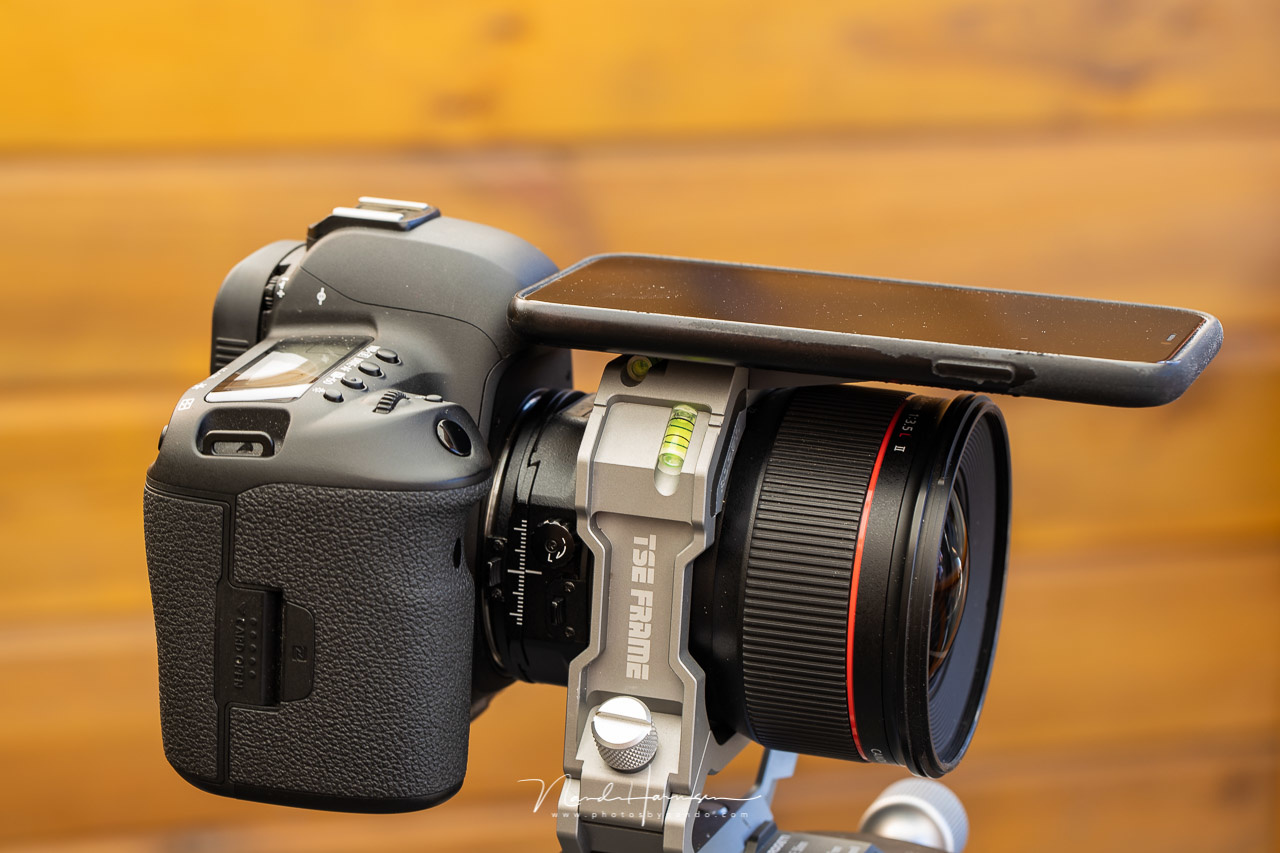 Flares can occur very easily with a TS-E lens. Rogeti has provided a plastic holder for your smartphone. It can block sunlight in some situations.

Installing the TSE frame is very easy. When installed, the frame does have a few issues. It is difficult to reach the knobs, and the distance scale is difficult the read. The depth of field scale is completely blocked. But the biggest issue is perhaps the lost ability to use the tilt option. Although this is the price you pay for adding a tripod collar: it limits the full potential of the tilt-shift lens. 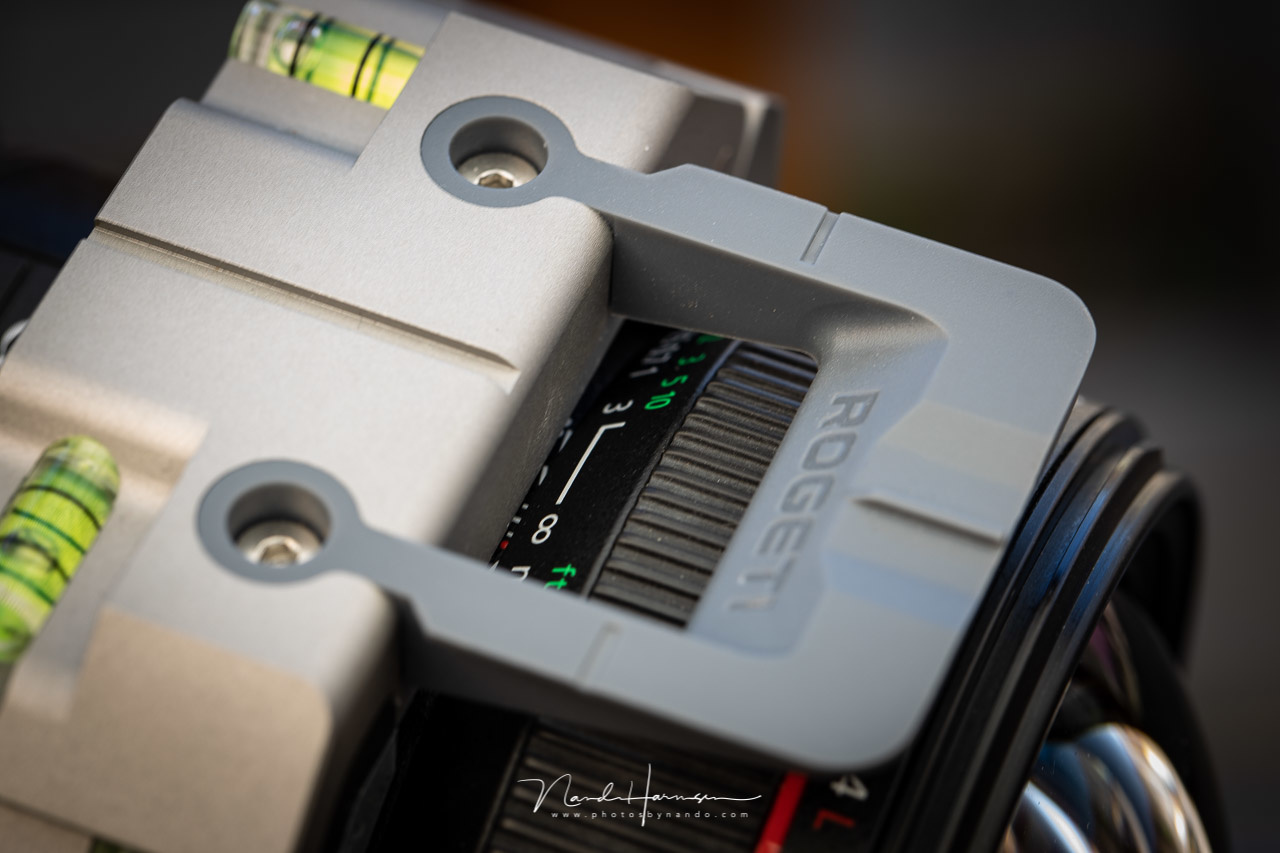 Unfortunately, the focal scale is difficult to see. The depth of field scale is nearly impossible to read. It is a big drawback, I think.

On the other hand, the TSE frame’s purpose is for shooting panoramic footage. If the lens is used with the tilt option, you will probably not use it for panoramic shots at the same time. Because it is easy to install or remove the bracket, it won’t be a major drawback, I think. 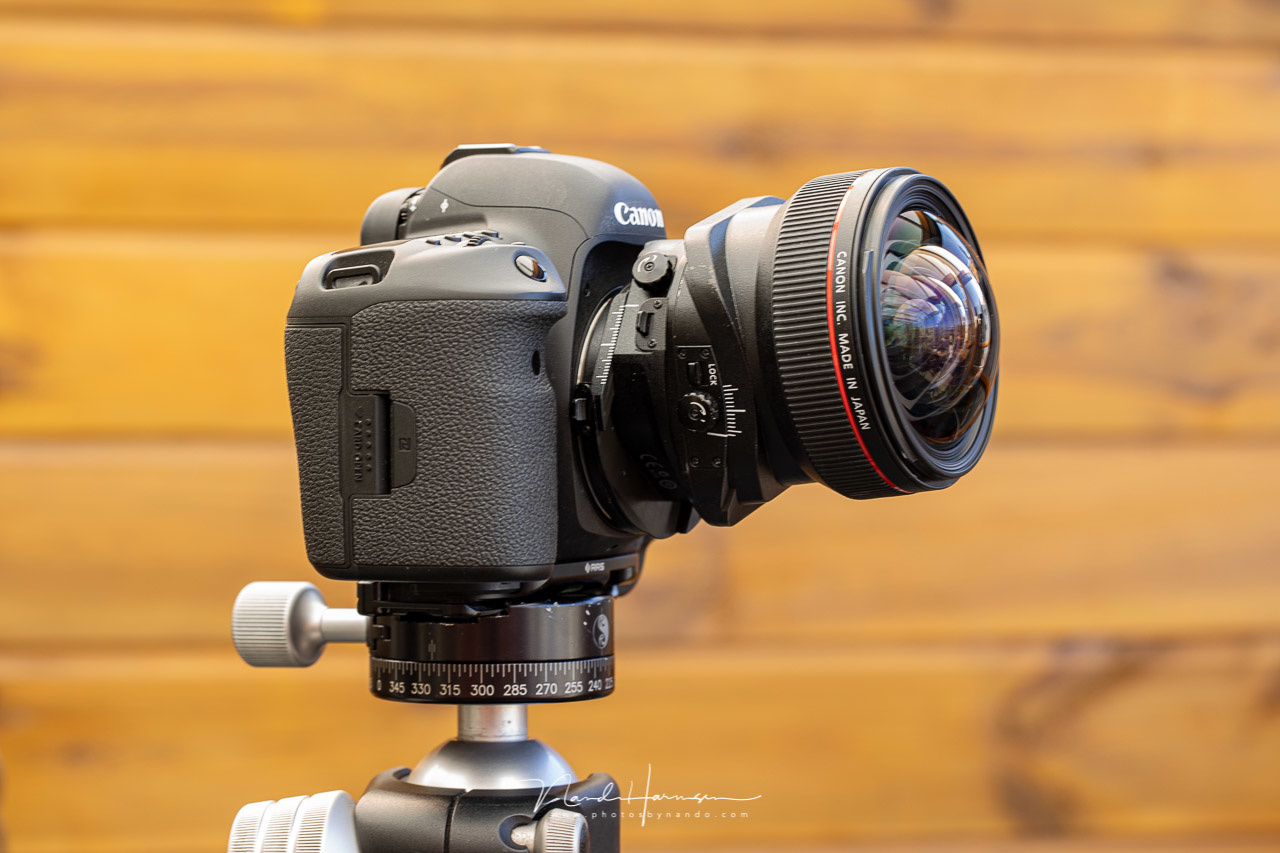 This is not possible with the Rogeti TSE frame: the tilt function. But for those who use the lens for panoramas, they won’t be using the tilt a lot.

The idea of the TSE adapter is simple. Those who know something about panoramas and nodal slides know how it works. Instead of moving the lens, the adapter allows you to move the camera instead. This way, the image circle of the TS-E lens will stay at exactly the same position, while the camera shifts to capture the whole diameter of the image circle. This way, you can be sure there is no parallax at all. The next two animated GIFs show how it works

Without the TSE adapter, you will move the image circle when shifting the lens.

With the adapter, the lens and image circle stay fixed in the same position while the camera shifts. 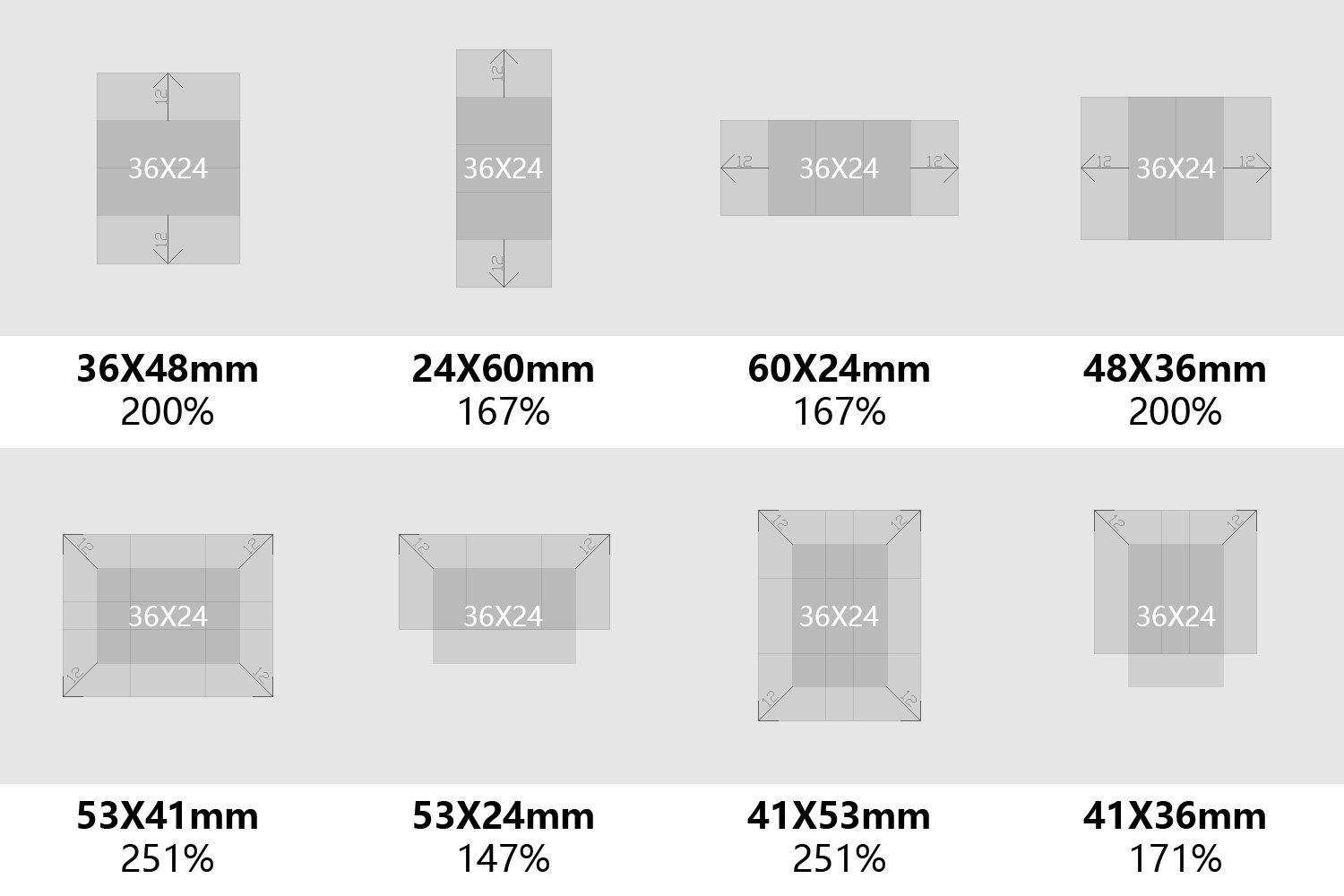 This is possible with the Rogeti TSE frame. (credit: image is borrowed from the Rogeti website (https://rogeti.com/products/tse-frame)

Shooing in a Horizontal Position

By mounting the TSE frame in the regular horizontal position, you are able to shift the camera up and down or left and right. This can be done with the camera in portrait orientation and in landscape orientation

Using the TSE frame is a normal horizontal position.

Shooting in a Diagonal Position

When the TSE frame is mounted diagonally, it is possible to shift the camera across both diagonals, increasing the field of view up to 251%. It is possible to use only the top half of the frame, of course, preventing a horizon in the middle. This will increase the landscape orientation to 147% and the vertical orientation to 171%.

If a TS-E 17mm f/4L is used in this way, it is possible to obtain an amazing field of view, with an increase of resolution at the same time. If you don’t care about the increased resolution, you could also shoot with a 12mm ultra-wide-angle, ending up with nearly the same angle of view.

By mounting the TSE frame in a diagonal position, you can cover a wider and higher angle of view. Due to the construction of the TS-E lens, this can only be achieved in this way.

Due to the limited amount of weight, it is easy to leave the TSE frame connected to the lens while transporting it in a camera bag. Using the frame is simple: just place it on the tripod, level the camera, and shoot. Rotating the knob for the shift can be tricky, just like loosening the locking knob. There is not much space between the frame and the camera body. Also, the levers for rotating the camera might be difficult the reach. 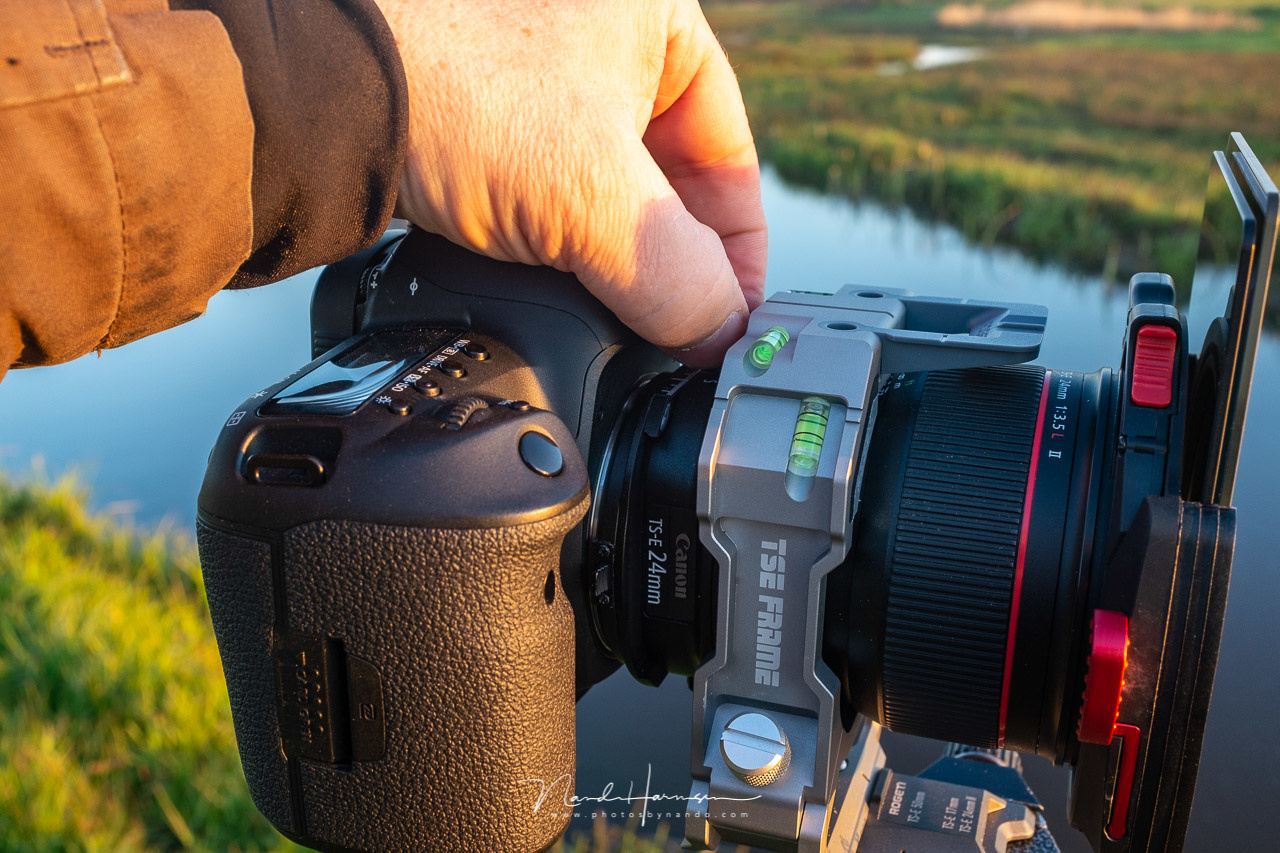 It is difficult to rotate the knobs of the lens with the TSE frame in place.

When using the frame for vertical panoramas, the weight of the camera requires you to fasten the locking knob. But this is not due to the frame itself, but the way the TS-E lens works. Just like panoramas in the traditional way, with a nodal slide, you have to take your time to properly set up your camera. I don’t mind, because it is spending time photographing. This kind of photography is not about speed and shooting quickly before moving on. 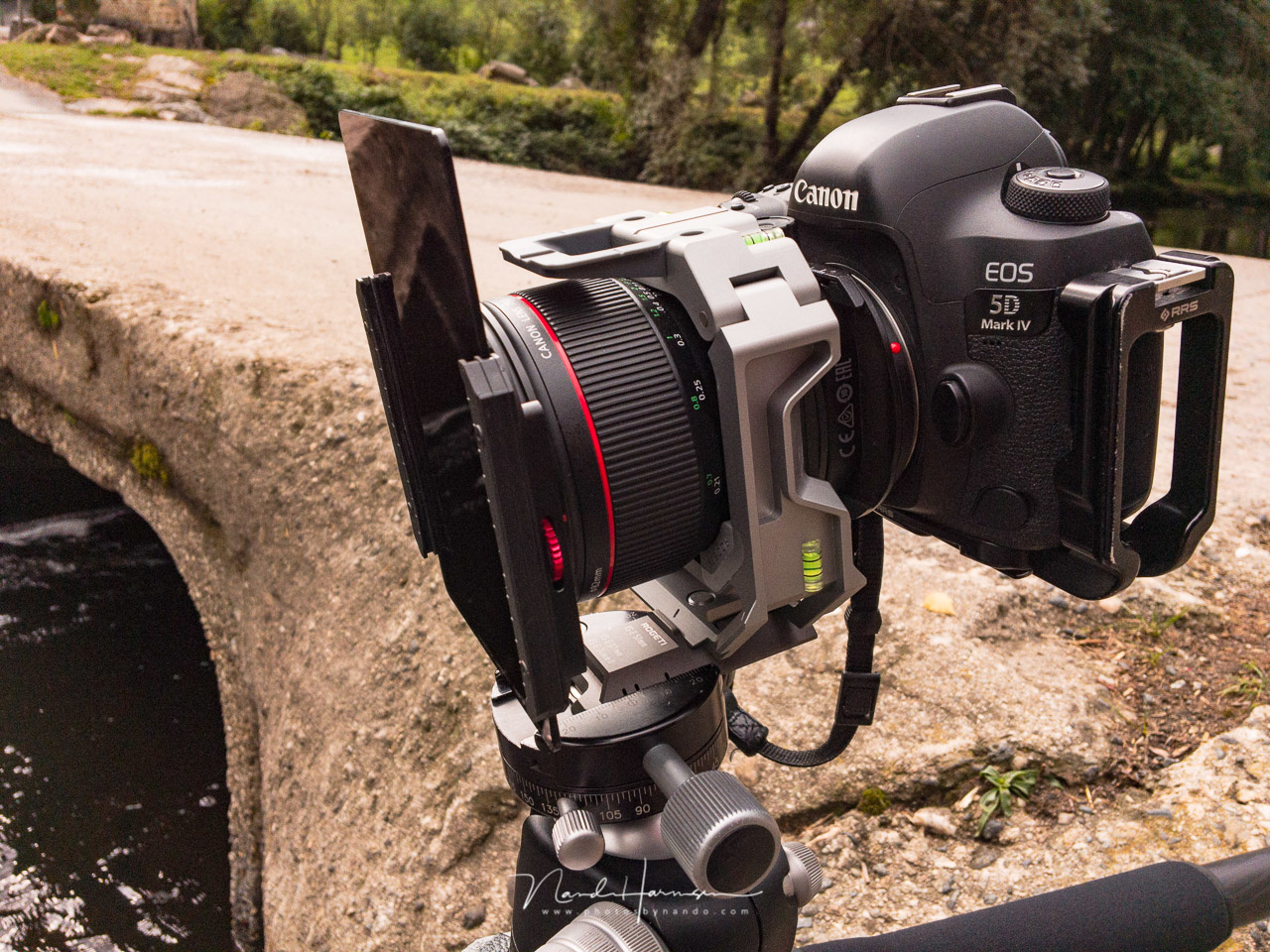 Shooting panoramas with the tilt-shift lens and the Rogeti TSE frame is fun. Although you have to level the camera, you can easy tilt the camera up or down without any problem. Just make sure it is kept horizontal. 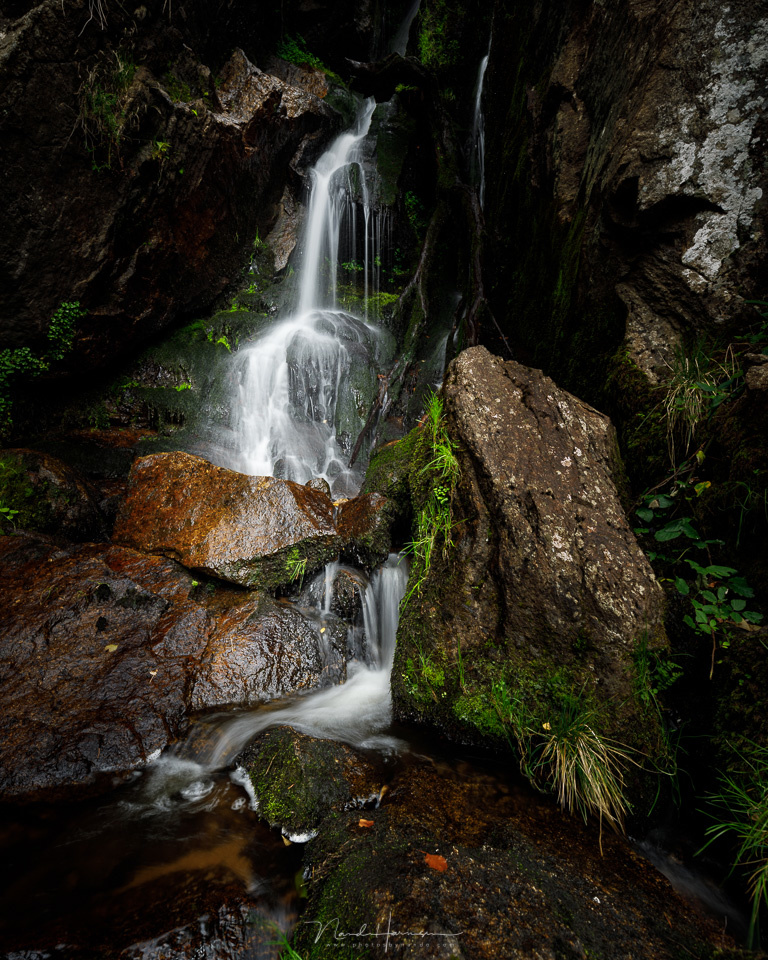 Four images are used in this vertical panorama, with the camera in horizontal position. The location was too tight to get the waterfall in one image. (EOS 5D Mark IV + TS-E 24L II, ISO 100, f/11, 1s, Kase CPL filter) 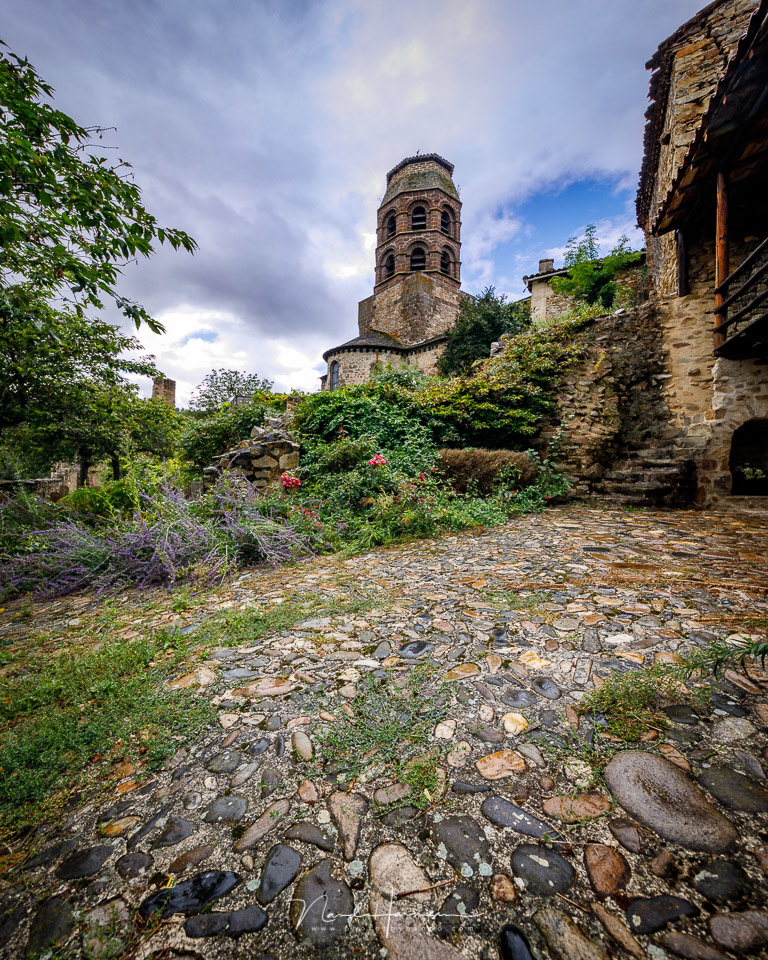 The most beautiful village in France, Lavaudieu. Four horizontal images are used in this vertical panorama, together with focus stacking between those four images. (EOS 5D Mark IV + TS-E 17L, ISO 100, f/11, 1/13 s) 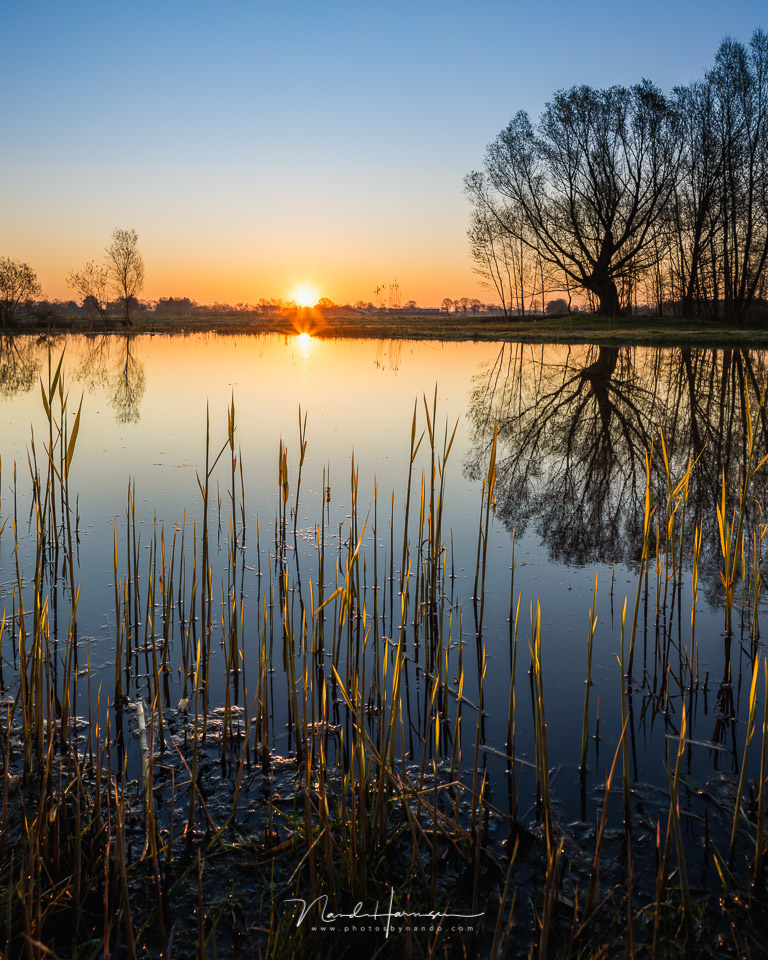 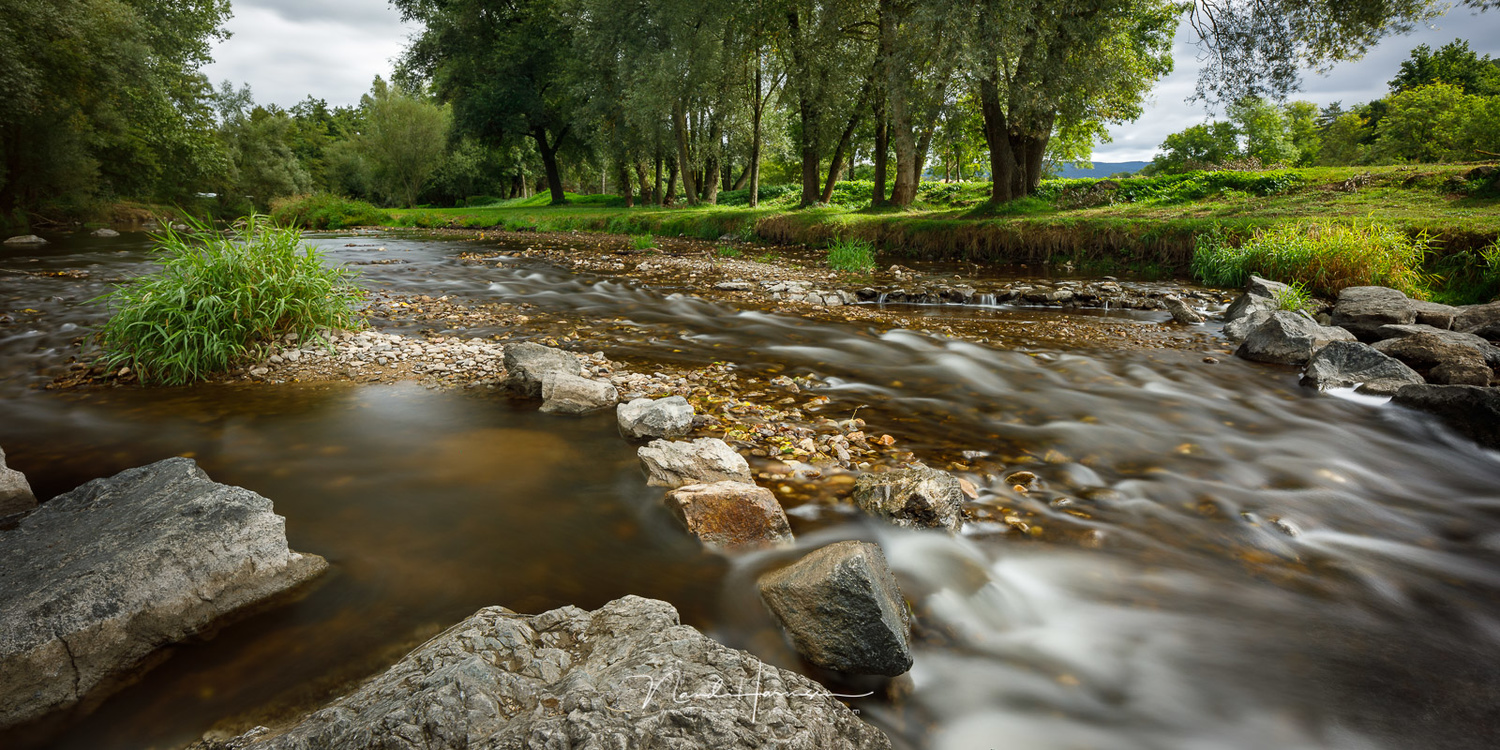 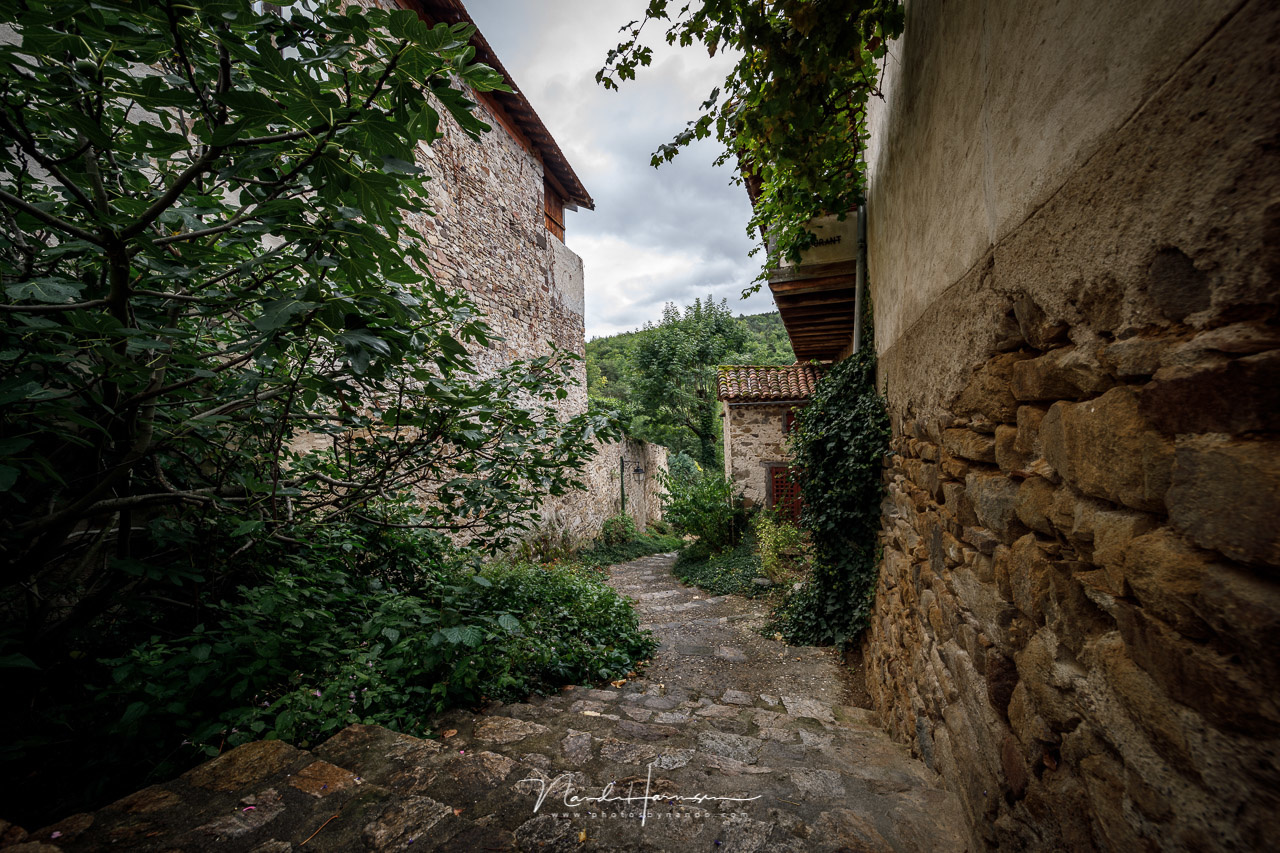 I needed to make sure the distance was set correctly, because the depth of field scale is barely visible. Setting the hyperfocal distance becomes a bit tricky. This is the biggest problem with the frame, I think. Although with a bit of practice, you get to know the right distance for a hyperfocal setting. If you want to use the tilt function of the lens for maximum depth of field, you need to remove the TSE frame.

I had my doubts about this Rogeti TSE frame, especially concerning the price. It is just over $300, and that is a lot. But I decided to give it a try and ordered one. It makes panoramic photos very easy without the risk of parallax. Compared to a nodal slide, there is no rotation, and it will prevent the typical curvature of horizontal lines in panoramas. But at the same time, it will stretch the sides of the image. For landscapes, this is not a real problem, but for real estate, it may give a strange look to the image.

I haven’t used it in real estate yet since 24mm and 17mm work well for most of the houses I have to photograph. But I definitely will try soon to see how it turns out. For landscape photography, it gives a nice addition when you already use tilt-shift lenses.

I have found two alternatives on the internet. First, there is the PPL TSE adapter. It is a piece of aluminum weighing 370 grams. It is not as flexible and requires a screwdriver to change the TS-E lenses. It is also much more expensive.

The other one is the Sunway TS-E24 bracket. It is heavier and less flexible compared to the Rogeti TSE adapter. But, just like the PPL, the adapter seems less bulky, thus leaving the focus ring and depth of field graphic visible. The Sunway is less expensive and seems to be a good alternative to the Rogeti.

What do you think of a TSE frame for parallax-free panorama with a TS-E lens? Do you think it is worth it, or just a piece of equipment that doesn’t add a lot of value? Or perhaps you have an alternative for the Rogeti TSE frame? Please let me know in the comment below.

Two-Week Trip to Europe: The Gear I Brought and the Gear I Should Have Brought