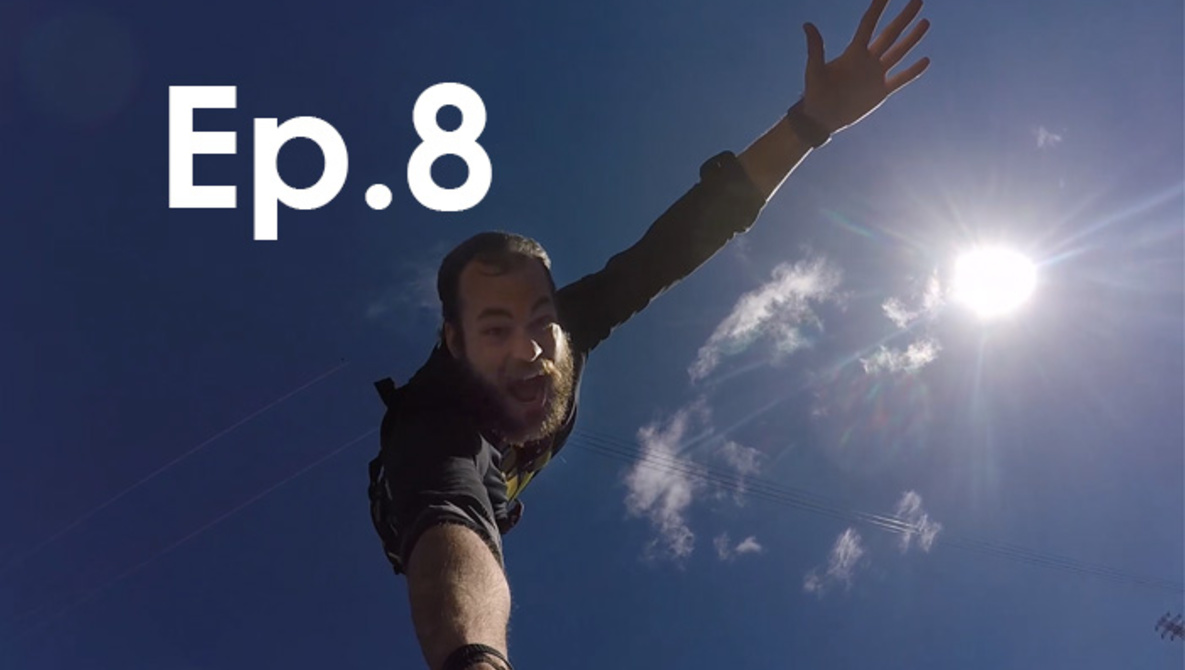 The final episode of this season of Photographing The World Behind The Scenes is finally here. In episode eight, we finally wrap up three months of filming and to celebrate, I go bungee jumping and Patrick takes a ride on the worlds tallest swing.

For the majority of my life I’ve been absolutely terrified to go skydiving but at the same time, I knew I had to do it. In college I actually made reservations to skydive with a few friends and for two weeks leading up to the jump I had a nightmare about it almost every single night. On the day of our jump we got rained out and I couldn’t bring myself to make another reservation.

12 years later in 2014 I went skydiving for the first time. Once again I was absolutely terrified until I actually jumped out of the plane and realized it wasn’t as scary as I had built it up to be. Bungee jumping was something that I never thought I would do; it was TOO crazy. Once I conquered skydiving my views changed; things that once seemed impossible or too over the top now seemed easily attainable. When I ended up in Queenstown New Zealand, the “adrenaline capital of the world,” I knew that I would never forgive myself If I didn’t take advantage of the opportunity.

I found the tallest bungee jump in New Zealand and I signed up. Elia is not much a thrill seeker and he didn’t want anything to do with it. Patrick was too afraid to attempt the bungee but I was able to convince him to do the “tallest swing in New Zealand” (which was still horrifying).  Naomi, was probably the toughest one of all of us; she signed up for everything without ever seeming scared at all.

The night before our reservation Patrick started watching videos of other bungee jumpers and swingers having total meltdowns on the platform. Watching these videos was probably the worst decision we could have made because neither of us got a solid night of sleep.

The day finally arrived and although I was certainly scared, I felt much better than I did during my first skydive attempt.  I felt like I was about to conquer a fear and have an incredible life experience while all I really felt leading up to skydiving was terror.

This bungee jump took place from a small metal box suspended on wires in between two mountains. Just getting out this this “box” was scary. Once you got out there, waiting for your turn to go was excruciating because you could see each person falling through the floor and you could feel the entire structure wobble around each time someone jumped.

Naomi went first and didn’t seem very nervous until she started to swan-dive off of the ledge and she spazzed a a bit right as she realized what she was actually doing. I was then grabbed next and I wasn’t able to see Naomi again before I started to get ready to jump. I knew she survived but it would have been nice to ask her what I should expect. Luckily she came back from her jump ultra energized and you can see her yelling at me as I’m getting strapped in, “you can do it Lee!”

I knew from watching the videos the night before and from the employees working there that they would get me to walk to the edge of the platform, they would count to three, and if I didn’t jump on three, it would make things exponentially more difficult. If you don’t jump on “three” you are basically giving yourself the ability to have a full on break down. I wasn’t going to end up like one of those people on Youtube.

1…2…3… and I forced myself to fall forward with my arms above my head. The “falling feeling” that you get that everyone is so afraid of can be overcome if you can just calm down and refrain from flexing every muscle in your body. I forced myself to relax and enjoy the sensation. You can see my face go from total concentration to full on ecstasy. I’m not sure I can explain the sensation but it is probably the closest I will ever get to flying. While skydiving just feels like a lot of wind, the change in momentum with bungee jumping feels amazing. It’s been over 6 months now since I went bungee jumping and I still think about it often. I can’t wait to do it again.

Patrick’s giant swing was next. I thought that nothing would scare me after the bungee but I was wrong. That swing was high, the highest in the entire world apparently. Luckily we made Patrick go first. The put you in a harness, get you to sit down, and then pull you out past the edge of the platform. The only thing easier about the swing is that you don’t have to jump off, the operator will hit a button to release the swing.

The cool thing about the swing is that it actually pulls you down faster than gravity. You can see Patrick actually go completely upside down for a second or two before he is “caught” at the bottom of the swing. Patrick’s mood does a complete 180 as he goes from terrified to absolutely loving it in about one second.

After we left, Patrick said he regretted not doing the bungee and I’m sure that the next time we both have the chance, we won’t hesitate to sign up again.

Season 1 of Photographing The World Behind The Scenes is now complete with Episodes 1-8. The Landscape tutorial with Elia Locardi is available right now in the Fstoppers Store; but that is only half of the story.

As you saw at the end of this episode, we filmed an entirely separate tutorial with Elia that we are still currently working on that focuses on cityscapes, astro photography, and advanced post processing. We are still editing that tutorial now and it should be released sometime around the end of the year. Season 2 of Photographing The World BTS will begin with episode 9 after the release of the second tutorial and may end up having an additional 10 episodes (we aren’t sure because they aren’t complete yet).

In case you’ve missed the other episodes you can easily find them below.

You can watch episode 1 here

You can watch episode 2 here

You can watch episode 3 here

You can watch episode 4 here

You can watch episode 5 here

You can watch episode 6 here

You can watch episode 7 here

You can watch episode 8 here

You can find the finished tutorial in the Fstoppers Store.