What I Learned Shooting the Neowise Comet 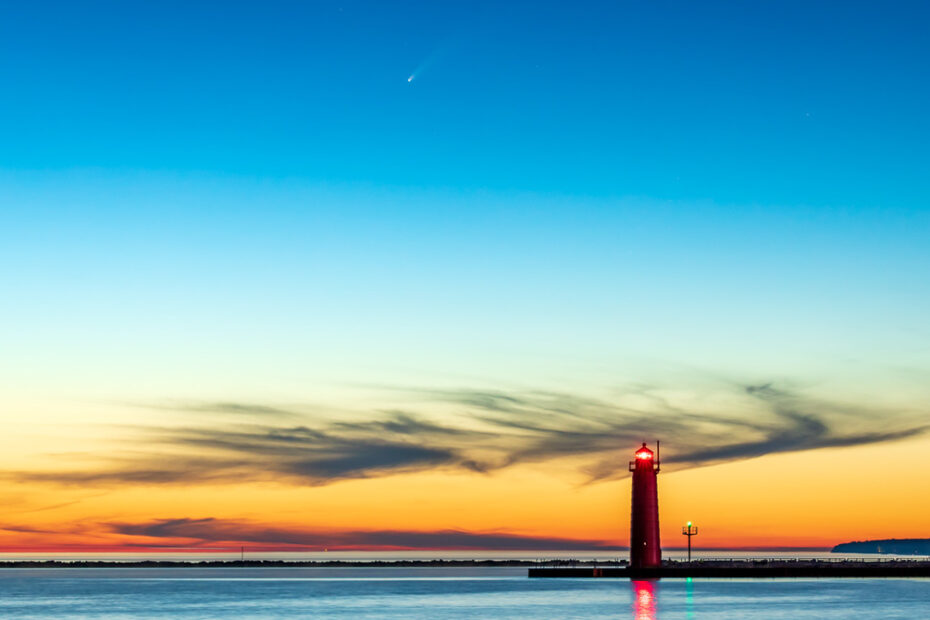 What I Learned Shooting the Neowise Comet

I strive to capture moments in time with my photography, and one thing I like is once in a lifetime or very rare moments. The Neowise comet (aka C/2020 F3 NEOWISE) is one of those moments that won’t happen again for about another 6,800 years.

I preface this by saying I have not done very much astrophotography. I’ve dabbled in it from time to time, but I was never impressed by what I captured (except for shooting the eclipse in 2017). This failure was mostly due to not having the right gear such as a large aperture lens.

When I saw that the Neowise comet was going to be viewable at a reasonable hour of the night and early morning, I set out to see if I could capture it. I want to share with you what I learned.

I set out on July 9th to see if I could capture Neowise over my local lighthouse on Lake Michigan. Dragging myself out of bed at 3 am, I quickly grabbed my coffee and set out for the lake. I had planned where I wanted to be with Photopills, but I also knew I had limited composition options due to my location on a pier.

Upon reaching the pier, I saw a small amount of haze low on the horizon, but not enough to call it quits. I figured that even if I couldn’t see the comet, the sunrise might be beautiful. I underestimated the comet’s visibility, and with my not-so-stellar eyesight, I didn’t see it. However, I did do a 15-second exposure of the lighthouse. I then shot some lightning off in the distance, the sunrise, and some baby ducklings. It was a great morning.

After I got home and imported the images into Lightroom, I discovered that I had indeed captured the comet by accident. After seeing this, it was game on. I was sure that I could get a much better photo the next time. The exposure was a bit long for astrophotography in this case.

After a couple of nights of cloudy weather, I set out on July 12th to capture the comet after sunset. Low clouds were a bit of a hindrance, but I did get some good shots before the clouds moved in and completely shut down the shoot before I could get a photo with my lighthouse. I considered it a success because I found the comet in the sky (on purpose this time), and I was able to photograph it for about 45 minutes. I was also able to see what length of exposures worked, and how well the images looked at various ISOs.

July 13th was the night everything worked out perfectly. I not only managed to get the shot I had envisioned, but it was just simply enjoyable. Everything went smoothly.I was delighted that I managed to capture several very nice images. This is where I learned the third thing – aperture is king when it comes to astrophotography. I was shooting with my Canon EF 100-400 f/4.5-5.6L II USM. I absolutely love this lens, but I soon learned that a faster lens, such as an f/2.8 or faster, would have been a better choice. Time to invest in some faster glass!

While shooting, we did have a short period after sunset that a little fog came along the water, but it added a little character to some of the photos but quickly dissipated. This should have been a clue for me.

4. Have a Backup Plan

After several more nights of cloudy and rainy weather, I set out again to refine my technique. I knew the comet would be a little higher, and I had plans for that, but I had forgotten about the fog.

Just as the sun set, the fog moved in:

For the next couple of hours, the fog dissipated a little, but then came back. I should have had a backup plan for the fog. There were a couple of nearby locations that I could have gone to, but I didn’t think of it at the time. From now on, I’m going to be more conscious of alternate locations if the weather or other factors don’t cooperate. Don’t get tunnel vision and stay with your first plan if it’s falling apart.

I did shoot some experimental photos that I didn’t think would turn out, but they weren’t too bad. It doesn’t hurt to give things a try and to find out what your camera is capable of producing. I found what maximum ISO I thought was acceptable for my camera, as well as the length of exposure for preventing star trails and movement of the comet.

A lens with a larger aperture would have helped, as the friend I was shooting with was much more successful this night. There are a few more nights when the comet will be visible, so I’ll refine my skills and try again.

Overall, I was happy with quite a few of the photos I took. I learned a lot of things about shooting at night and about anticipating weather conditions. Even though the area was clear, the cold water around the lake made for its own little climate zone. On social media, the images with the comet more prominent in the frame seemed to be the most popular, even though there were other photos that had better color and sharpness, such as the blue hour shots.