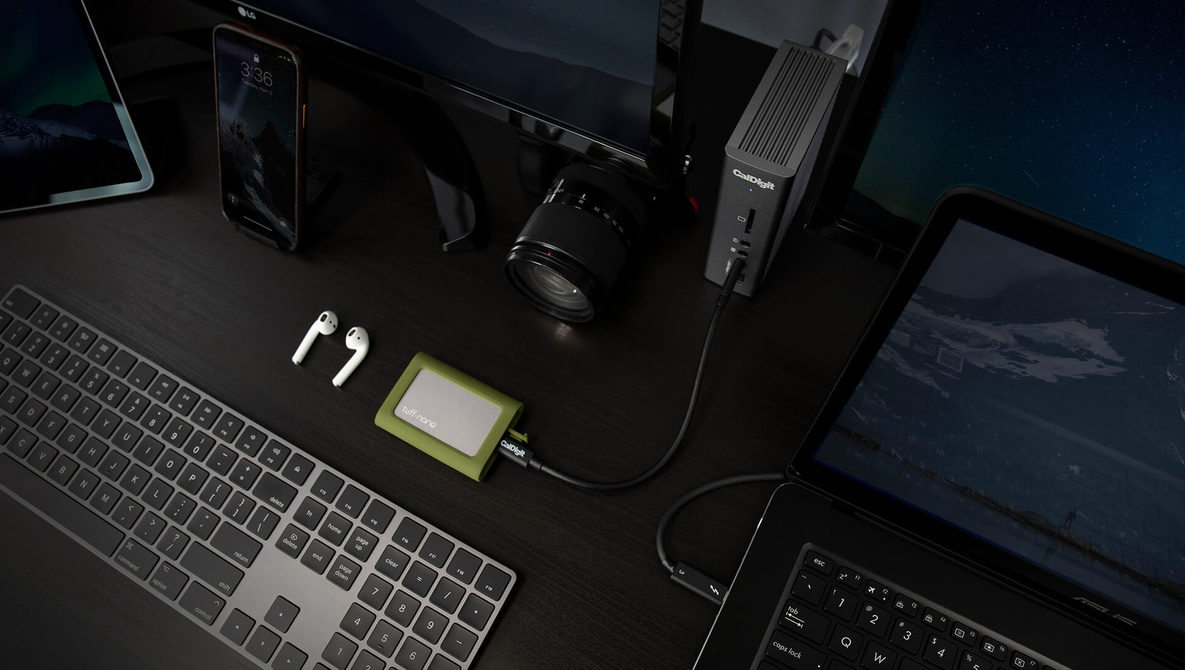 What I Won’t Travel Without: Fstoppers Reviews Caldigit’s Tuff Nano

Between 45 MP raw files and 4K video, it’s tougher than ever to ensure that the content you produce on a trip can actually make it home. Add Apple’s absurd pricing for a soldered-in SSD, and you can probably spend as much on storage for a trip as a business class plane ticket. Caldigit is a name you might not be familiar with, but it might offer the perfect solution.

When it comes to storage and backup in the field, there’s a multitude of options. While I’ve known some photographers to just pack a bag full of memory cards, this doesn’t work for me. Not only do I want to have the safety net of making backup copies of my files, but it’s also great to be able to get started with post-processing right in the hotel room. This is also a great practice for another reason: checking your files on a bigger screen. In the past, I’ve caught everything from annoying dust spots to an AF miscalibration, saving hundreds of subsequent shots that would otherwise be impacted.

For use in the field, I’ve got a few requirements: the storage needs to be bus-powered (meaning no external power bricks needed), fast enough not to bottleneck my workflow, and durable. Before SSDs dropped in price, I used Western Digital’s My Passport drives. At 1 and 2 TB, these were plenty spacious, but I had some durability concerns. They use a delicate micro USB cable and a shock-sensitive spinning disk, making them not a great setup for travel.

Over the last year or so, SSD prices have fallen enough to make external SSDs a viable option. If you keep an eye on sales, you can find 1 TB for less than $100, or 512 GB for less than $70.

Since I first switched over to SSDs, I’ve been using Sabrent’s Rocket Nano, but recently, I thought I’d try out CalDigit’s Tuff Nano. The Tuff Nano has a design reminiscent of Lacie’s Rugged line, with a grippy rubber bumper running around the edges (thankfully, they left out Lacie’s absurd price premium). On the drive is a USB-C port, hidden under a rubber flap. The packaging is surprisingly great for a mundane computer accessory, with the drive, USB-C, and USB-A cables all coming in a sturdy, reusable plastic clamshell case.

The drive itself is small, with a footprint similar to a credit card and only a little thicker than a pad of Post-It Notes. The drive comes in a number of different colors, although this only changes the color of the rubber bumper. Still, it’s a nice way of keeping drives straight without having to mark them up. The body is solid metal. Along with the drop-resistance conferred by the silicone bumper, the drive itself is IP67 rated. This means the drive can take immersion in water at 1 m for 30 minutes, a welcome feature on the road. Overall, it feels very solid, with the only spot of concern being the potential for the rubber flap to tear off, although the manufacturer claims even this won’t impact water resistance.

On the inside, the drive features a USB 3.2 Gen 2 Type C interface paired with a Toshiba NVMe PCIe SSD — a lot of acronyms that all translate to fast performance and reliability. The manufacturer claims 1,055 MB/s reads and 900 MB/s writes, and this is the only spot of disappointment I’ve had yet with the drive. On tests across both Windows and macOS, the drive wasn’t able to match the claimed speeds, putting up around 900 MB/s reads and 700 MB/s writes in Blackmagic’s Disk Speed Test over USB-C. To be clear, this is still great performance and more than fast enough for my purposes, but a bit of a letdown nonetheless.

Out of the box, the drive isn’t formatted for use with Windows, although it is still compatible with the platform after some work. It’s pretty easy to fix via disk management, but a bit annoying, considering exFAT exists.

In use, the drive has been a solid performer, with no disconnects or errors. With heavy use, it can kick off a bit of heat, but at no point does it seem unusably warm. The included cables are both of good quality, but are short and have a pretty strong twist near the strain relief, making them a bit finicky to the plugin.

I’ve already got a couple of similar drives, with Sabrent’s Rocket Nano being almost identical, albeit with less ruggedness. For comparison, Sabrent’s drive is a little smaller and sleeker. You could fit two Sabrent drives in the space of one of CalDigit’s, but both are so small that this is of minor importance. Interestingly, Sabrent’s drive puts up faster writes, at 900 MB/s with similar read performance. As mentioned, though, Sabrent’s drive lacks the weather resistance of the Tuff Nano, with this being a major downside in a travel-oriented drive.

Sabrent put up some better numbers, but for my use, the ruggedness of CalDigit’s drive still wins out.

Compared to WD’s Passport line, there’s not much comparison in my opinion. While the prices are slightly higher for similar capacities, the SSDs deliver way more value. USB-C is a far better connector standard, with dramatic increases in speed and improvements in both ruggedness and interoperability with other pieces of gear. In the case of the Tuff Nano, the shock resistance and water resistance are far beyond what the WD drive would be capable of surviving.

Overall, I’m very happy with CalDigit’s Tuff Nano. It’s just a product that oozes quality, from the thoughtful packaging to the hardware itself. The slight miss on drive performance isn’t a deal-breaker for me, but something to keep in mind if you’re planning to hit the drive with harder workloads, as there are similar, but faster options out there. When it comes to value, timing your purchase starts to become an important consideration, as prices are quite volatile. Large discounts seem to be the norm, so if you’re thinking about getting one of these, waiting for a sale might make a lot of sense.

What Could Be Improved

We Discovered These Awesome Instagram Photographers with the Fstoppers Travel Hashtag