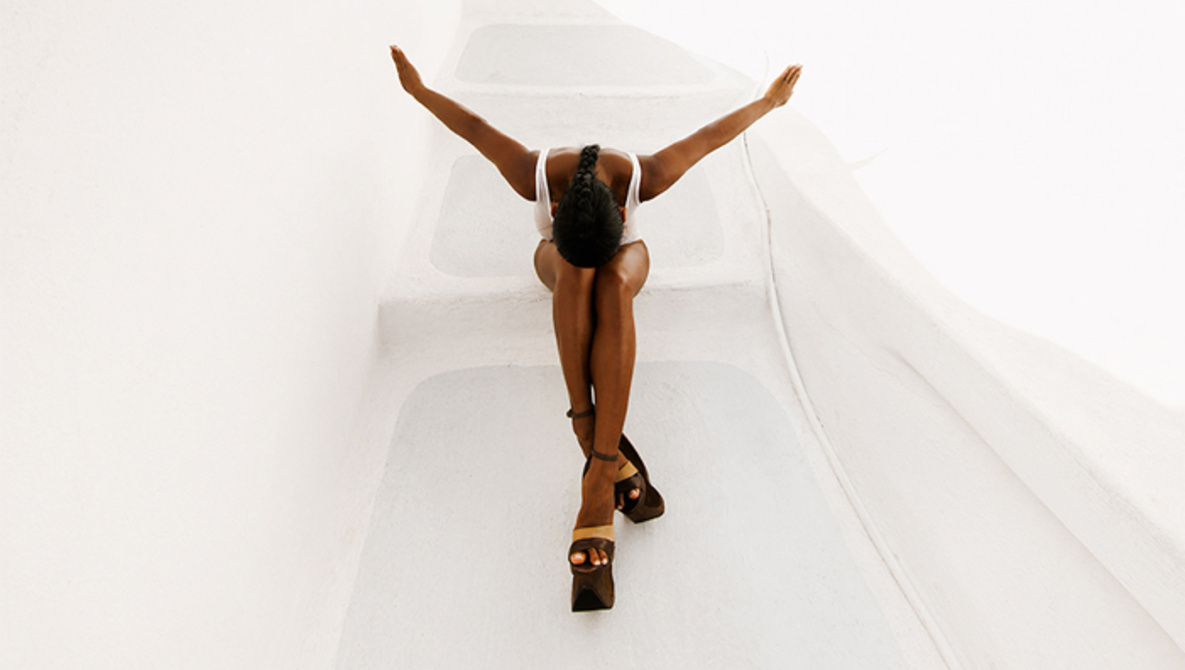 While there are obviously no strict rules about what lenses a photographer should buy, my curiosity was piqued recently, when legendary Glamour Photographer Jarmo Pohjaniemi (Playboy, Shoot The Centerfold) announced he was headed to Santorini with a pair of Canon EF 11-24 f/4L USM lenses. I assumed he was going to shoot landscapes (after all, it’s Santorini), but his answers when I asked were far more interesting than that.

“People always ask me what my favorite lens is. However, I don’t have an answer, since there’s no such thing as my favorite lens because they all are favorites for specific usage. Playboy photographers’ favorite lenses vary from 50mm to 300mm,” said Jarmo, speaking on the phone with me a couple weeks back. “The most common ones are the 24-70mm and the 70-200mm, but my evaluation is based on the last 15 years or so and what I and my colleagues have used to photograph Playboy centerfolds and hundreds, if not thousands, of pictorials.”

This doesn’t surprise anyone who shoots portraiture, of course, as these focal lengths and their related glass have been proven time and again to be ideal for that sort of work. What is surprising, however, was Jarmo’s fervent enthusiasm about heading overseas with twin Canon 11-24s.

“When I purchased two Canon 11-24mm lenses and posted the boxes on social media, the questions started pouring in. Why would a Playboy photographer use such a short and wide lens? The answer is quite simple: Why not? Or because we can,” exclaimed Jarmo. And he’s right. Why the hell not?

There’s more to it than that, though.

“Photography, to me, is a form of art, and my vision is an extension of the lenses and cameras that I use. Most of the older generation still believes that centerfolds are shot with large format and medium format digital cameras. This couldn’t be further from the truth. Today’s Centerfolds and pictorials are mostly shot with capable DSLR cameras (my first 38 digital Playboy covers were shot with an 8.6 MP Canon digital camera)”, says Jarmo. He adds: “If you are familiar with European Playboy editions, you see a lot more focal length variety than in the US edition. Things have changed and will continue doing so. I remember introducing a 20mm lens in the mid-90s in my Playboy pictorial by creating opening layouts and beautiful horizontal scenarios. There were few times where the editor pushed back, saying that he needed more closeups instead of my artistic visions.”’

That’s also unsurprising, considering the expectation in the glamour photography world. But 20mm and 11mm are profoundly different, especially when the latter stems from a brand new, minimally tested piece of equipment like Canon’s new 11-24mm f/4L. For such a respected and successful shooter to take such a bold risk, well, I found myself excited to see what his results would be.

“I like to believe that I have been the most focal length variety-friendly Playboy photographer that there has ever been”, Jarmo says emphatically, “I saw all of my colleagues in action and noticed where their sweet spots are (lens-wise).” This sort of rebellious attitude resonates with me very deeply, as nothing beats experimentation in your work. I’ll be the first to admit, however, that my experimental motivations have been woefully lacking in the last year or two — something I aim to remedy going into 2016.

Out With the Old

“When I convinced myself to purchase the new Canon 5DS R, I was very anxious to test all 15 of my existing lenses to see how would they hold up with the new 50 MP Canon,” said Jarmo of yet another of his recent purchases. But he went on to lament about his once trusted Canon 20mm f/2.8, saying: “Most all of them were sharp and able to handle everything, except for the Canon EF 20mm f/2.8 USM that has lived in my camera bag since this lens was announced. What a great disappointment this was. The 20mm f/2.8 lens was a lens that I used in almost every single pictorial.”

Now it was starting to make sense, as I sat on the phone listening to Jarmo unwind this tale of two lenses. This was a shock and a profound letdown regarding the Canon 20mm. “I did not want to believe these results and did additional rounds of tests to ensure the results were accurate. And they were. The lens was soft with the Canon 5DS R and can no longer be used for professional use,” he concluded.

I was so eager to his results, and was definitively not disappointed. While here on Fstoppers, we sang the praises of the Canon 11-24mm, seeing Jarmo’s images with it from such an epic location was nothing short of breathtaking.

Like any experienced professional, Jarmo was not about to trek to Santorini without thorough testing of his new acquisitions. “I did some tests with the new 11-24mm f/4L USM lens before departing to Santorini. I was quite impressed with the lens that cost me $3000 each, but now seemed a bargain, based on the stunning results. All of a sudden, I wasn’t so bummed out about my old 20mm after all,” said Jarmo, with a pronounced happiness in his tone.

When I pressed him to expound on his desire for such extreme focal lengths when shooting models, he replied: “What drives me in photography is not only photographing beautiful glamour and fashion models, but also landscapes, buildings, and architectural elements that can be incorporated with models or without them. A pictorial should offer variety, much like a song, where you have an intro, verse, chorus, verse, chorus, bridge, verse, and outro. This is where the different focal lengths and lenses make you the king that editors cannot ignore. I have photographed with almost all lenses ever made during my career and finding a new lens that fits in your collection surely is a feeling like you have won big.”

But is it really that good and that useful for a commercial glamour and fashion photographer?

We went on to discuss some of the technical aspects of the Canon 11-24mm, which Jarmo was less interested in than the average gear-testing shooter. “To me, the magic of the 11-24mm f/4L lens is the ability to keep the vertical lines in check. The ability to stretch the top, bottom or sides of the image gives you an advantage that was not the same with previous lenses in this category. I see that there are plenty of lens reviews and tests about this same lens and I applaud all of them. But most of them focus more on the geeky side instead of on the working photographer who shoots models. This is why I won’t dive in too deep to the color charts and test panels.”

Jarmo continued: “The beautiful Greek dollhouse-like buildings become the most important models. The lines, walls, sky, and ability to photograph with a such short subject distance and keep everything in check was a pleasure that none of my previous lenses were able to produce. Lengthening models’ legs with a specific angle gave me an opportunity to add an artistic feel to the images and put a smile on our models’ faces.”

I agree 100% with his assessment that the Canon 11-24mm is a special lens, but is not for everyone. It takes some practice before you can master images that will impress. But if you have a good understanding of extreme wide angle lenses, their flaws and gains, then it should become a walk in the park for you quickly.

Still, Jarmo noticed the same technical strengths in the 11-24mm that others have praised. “The vignetting is minimal and even welcome in some situations. The chromatic aberration is nonexistent compared to the other lenses in the same category. Distortion was expected, but when you learn to control the barrel of 11-24mm f/4L, you will be glad you made the investment. The lens is centrally very sharp and that nicely reaches almost to the edges of the lens. I never saw any alarming dropoff in its consistency. If you like nice blue and contrasty skies, then you are going to love this lens. The lens is well-built and feels like a tank. Not everyone likes heavy lenses like I do, but the weight should never become a cornerstone when measuring quality,” he said.

Is it worth it?

Overall, a lens in this price range that carries the f/4 aperture rating tends to raise a lot of concerned eyebrows, but Jarmo assuages those concerns in due course, stating: “A lot of people have now asked me about the f/4 lens vs. its hefty price and if it is worth it. Since this lens is geared toward landscape photographers, you don’t need to have an f/2.8 lens. The outdoor enthusiasts will find the f/4 lens quite suitable. The only thing I found a bit odd was that you cannot screw any polarizer filters on it due to its very bulky and curvy front. However, I am confident that somebody will come up with some solutions soon that will make sense!”

But do Playboy models look good when shot with the Canon 11-24? Take a look for yourself, but also consider Jarmo’s final statement: “It’s a great tool to have, even when shooting models. I have a few samples from a Playboy shoot where the 11-24mm f/4L lens added a nice touch to the pictorial that was released in Playboy Venezuela and Croatia on October 5. The legs appear longer than they actually are on purpose. This gives the image more presence and emphasizes the female physique.”

I think this case is closed, wouldn’t you agree? (Oh, and don’t tell Jarmo I told you, but there may or may not be a rumor going around that the next Shoot The Centerfold [NSFW] seminar is in the works for April 2016 in Miami.)

Finally, check out these scenic images Jarmo captured while in Santorini and definitely visit his website as soon as you can.

All images used with permission of Jarmo Pohjaniemi.

[NSFW] ‘Nutscaping’ Is a New Phenomenon That You Don’t Need to Be Aware Of: Landscapes With Your Balls